The lack of space on my photo hard drives right now is testament to the sheer volume of snap-worthy cars at the 2022 Tokyo Auto Salon.

So far I’ve given you an event intro, not one but two looks at the Makuhari Messe car park and an overview of the 2022 show through my eyes as a TAS first-timer. Today I’m going to wrap things up with my favourite finds from the show floor.

First up are my favorite kei cars, specifically a trio of superb weekenders, as imagined by Forest Auto Factory (FAF).

At first look I thought they were all fibreglass bodies on custom chassis, but then I looked a little closer and noticed the door mechanisms were all vintage. As it turns out, they are based on a rare Subaru 360 wagon (the orange one), a Honda Vamos (the blue truck), and a Daihatsu Fellow Buggy (the red beach buggy).

The interior details are just fantastic, and you can really sense the joy that FAF boss Tomori-san has for these cars. I especially loved the textured paint that he chose for all three builds.

Considering the base cars are pretty rare, I’m not sure how sustainable these restomods are, but I would love to see some replicas available for sale to the public.

Maybe FAF could team up with my next favorite kei concept car, the T-Box from KG Motors. It could be a modular vehicle utilising its robust chassis and dual electric motored axles. Just imagine being able to swap a beach buggy body onto your minivan for the weekend…

This is what I expecting to see more of at TAS, and more robots. Where were all the robots?

The ItoP (Iron to Polymer) concept was produced by Toray Carbon Magic and is an exercise in cutting edge production technologies, specifically showcasing a new material named ‘Shinayaka polymer’. They’ve used it everywhere, in the monocoque and even in the suspension components, which results in a kerb weight of around 850kg. Oh, and it’s dual motor in-wheel, rear-wheel drive.

The presence of high-end kyusha builds was strong at TAS 2022. I’d have really liked to seen them raised up on little platforms, but hey, random bits of carpet will have to do I guess…

For obvious reasons, these colour-coded kyusha from Trail Motor Apex Racing were definite highlights. I probably wouldn’t drive one in public, but if I had a big enough living room I’d put one in there.

A Mazda RX-3 Rotary Wagon on the other hand, I would daily quite happily. I kept coming back to this sweet little thing until I met its owner, Komaba-san from Garage I. He told me it was without an engine, but he’s got something pretty rad planned for it. I’ll definitely be catching up with him when the ignition key is ready to be turned.

Another car that brought out the child in me was Kei Miura’s Hot Wheels-like 280ZX. Like custom car royalty he was surrounded by an entourage, although I was lucky that he glanced my way for a split second of recognition. I can’t wait to catch up with Miura-san again soon; he’s promised me first look at his Hakosuka project…

And on the subject C10 Skylines, an absolute standout was the Speed Forme Hakosuka, which has carbon fibre everywhere.

Turning it up another notch is this Hakosuka entry from Obayashi Factory. You’ll be happy to know that I’m heading up to Tochigi later in the year for a full shoot on this amazing build.

Obayashi Factory even had a sister car on display in the form of a wide-body S30 Fairlady Z. Should I feature that build too?

Now, I know I was winging about the crowds and how much my feet hurt in my TAS overview (and now the carpet in this post), but in reality, I would do it all over again in a heartbeat to spend more time with the Rocky Auto ‘3000GT’. Being able to see a car like this up close and personal is a real honour, and I’m grateful to have had the opportunity.

This car, not just because its gold, oozes class and build quality quite unlike anything I’ve ever seen. There’s an old world weight to it similar to an antique piece of jewellry.

I know it’s been Garage Active overload recently, but how could I not talk about this BNR32 Skyline GT-R?

The interior has been completely re-trimmed in leather, with splashes of Alcantara and, yep, you guessed it, carbon fibre.

Utilising an HKS turbo, the RB26 (now actually an RB28) is pushing 665PS through an OS-88 sequential transmission. Manifolds and the exhaust are all Garage Active originals, as is the wide-body kit, which is finished in Aston Martin Ceramic Grey.

One of Sakamoto-san’s newest builds – this BCNR33 Skyline GT-R – is what I call the ‘executive drag machine.’ Reason being, it’s trimmed with a full (front) interior, has air conditioning and air suspension but still pulls 10-second ETs on the quarter mile.

I’ll be back to see this car for a full shoot sometime this year, and yes, I’m working on my excuse to ride shotgun in it…

Let’s talk about Rally Japan. I’ve included these cars, not because they are groundbreaking or the next best thing in performance tuning, but because of what they symbolise. As you may well know, Japan’s WRC round was scheduled to return in 2021 after a seven-year hiatus, but it ended up being cancelled due to the pandemic. That really sucks.

Of all the things I was looking forward to last year, heading up to Hokkaido was right up there. Let’s hope it happens this November.

Here’s something I knew nothing about until I checked the TAS 2022 vehicle list and saw ‘Subaru E-RA’.

Like all RA cars (including my own Project GC8) the ‘RA’ stands for record attempt. Unlike my Type RA, there’s an added E here that stands for electric.

Subaru are planning to break some records over in Germany on the Nürburgring next year. By the sounds of things, they are well into circuit testing here in Japan, which means while this is labelled as a concept, there is indeed a functioning car underneath.

When we think of Subaru we generally think rally, but in 2017 STI set a four-door sedan ‘Ring record of 6m57.5s with their WRX STI Type RA NBR. With this new electric car they want to break 6m40s.

Like the rally cars they’re famous for, the E-RA is also all-wheel drive, with a Yamaha electric motor at each corner, collectively producing 1,088PS. Apparently this technology is compliant with FIA E-GT regulations, which sounds promising.

Interestingly, those FIA E-GT regulations stipulate a road car chassis, which is even more promising, as it means the E-RA could potentially be the first hypercar from Subaru. Stranger things have happened…

Personally, I wouldn’t look twice at a Subaru made after 2007 as they’ve become bland, lifestyle-orientated (OK, I would probably rock an Outback for weekend use, sue me), and their STI performance line has stagnated for a decade with the same engine, putting out the same power. In 2018, they unveiled the STI Viziv, which looked promising, but then proceeded to release yet another old-recipe WRX with questionable styling. I’m really hoping that the E-RA is the dawning of a new age for this quirky little car maker from Kanagawa.

We’ll finish up here, but check out the bonus chapter below for some more of my Tokyo Auto Salon 2022 favourites.

A Suzuki Cappuccino With An Extra Shot

Damn just a bunch of awesome cars right here
More than the eye can see!

This is what I expecting to see more of at TAS, and more robots. Where were all the robots?


Toby, I think you have confused TMS with TAS. I would leave futuristic concepts and robots to TMS than TAS. LOL!

You know what's funny? 3000GT was the promo name for A70 Supra in Japanese commercials.

What's also funny is I'm not sure the writer knew what he was looking at.

"This car, not just because its gold, oozes class and build quality quite unlike anything I’ve ever seen. There’s an old world weight to it similar to an antique piece of jewellry."

Or maybe like a 1967 Toyota 2000gt? The most beautiful Japanese car ever made.

This is a reproduction that Rocky Auto makes. It's on their website.

Ah I didn’t know that, or if I did I’ve forgotten.
Just goes to show if it fooled me, what a fantastic reproduction it is. They do mention on their website the attention to replicating original coating and plating techniques.

what's going on with the half built skyline?

I think it’s to showcase the restoration process, and how the carbon fibre body panels are integrated

The vehicles on the Japan Rally stand look like they come from History Garage in Odaiba - Makinen's EVO and McRae's STI. Unfortunately it seems they have now closed. Was an awesome place to visit, they had a 22B there as well 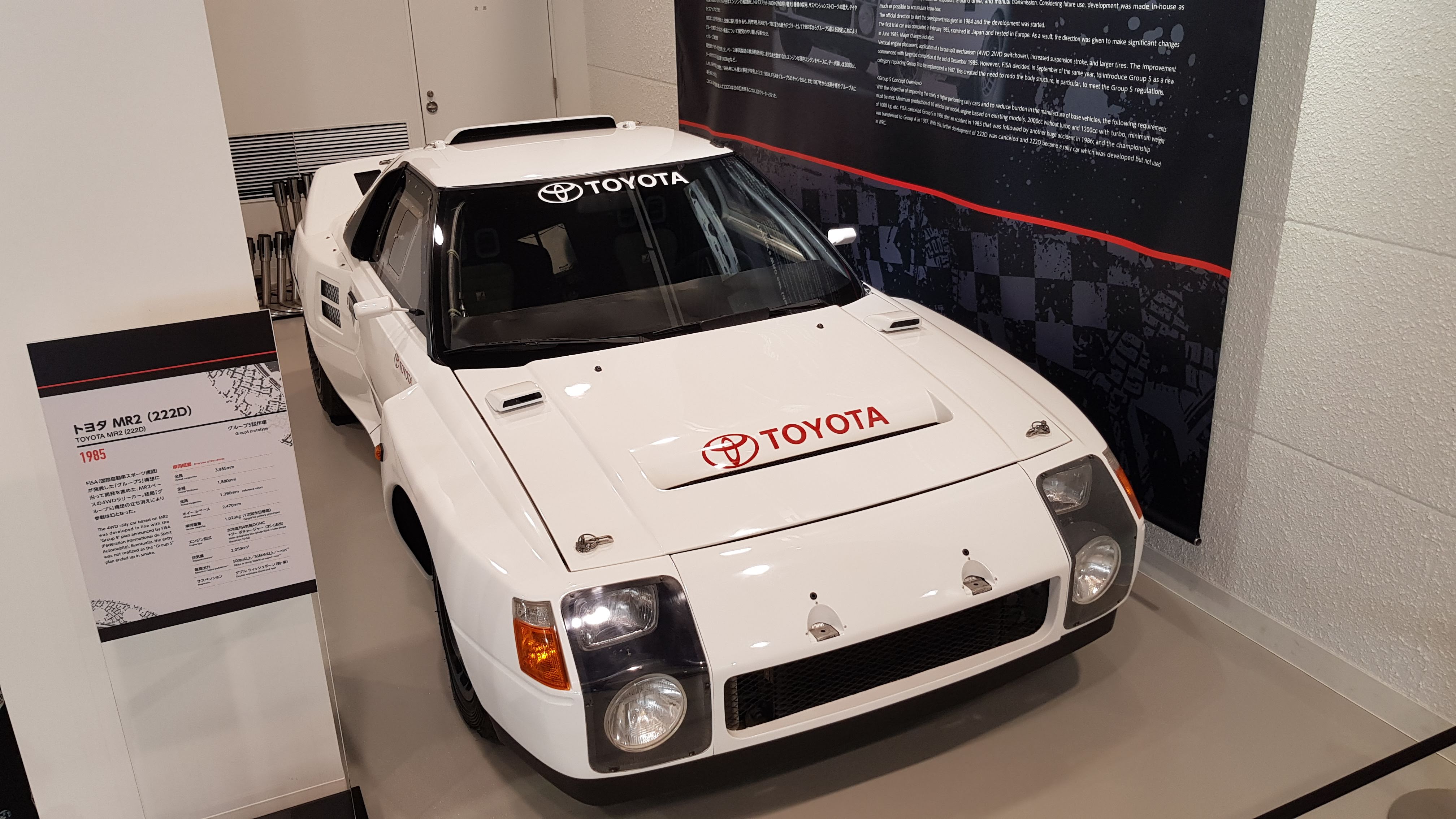 I keep meaning to get over there, hope it’s not really closed!

Speaking of color-coded, does anybody know the color code for those TMAR kyusha builds? I love that deep orange. They're a thing of pure beauty.

Missed chance for a pwn by not saying "That "Rally" sucks when talking about the Japan WRC.