SHARE Turning Back Time At The Race Of Gentlemen

‘Karen, you can’t go that way. If you need to speak to the manager, that would be me.’

One of my most memorable moments from The Race of Gentlemen 2021 came on Sunday morning, when a member of the public walking along the shoreline found their way to the closed section of beach. They wanted to walk through, a scene ensued, but the message from officials remained the same, and for good reason – it was race day.

After being cancelled in 2020, anticipation for this year’s event grew tremendously in its lead up. Perhaps unsurprisingly then, The Race of Gentlemen 2021 had one of the biggest turnouts in recent years, if not ever.

Over the course of three days, the small seaside resort city of Wildwood, New Jersey is flooded with motorcycles, cars and trucks from yesteryear, taking the town back to a bygone era in the process.

For those unfamiliar with The Race of Gentlemen, its roots can be traced back to 2012, when a group of friends in a club called the Oiler’s raced pre-1950s cars and bikes on the beach in Asbury Park, New Jersey. Since then, it’s grown into a weekend-long event, but still maintains it original ties while also creating new ones.

The first official night has an awesome bike show (more like a party) called The Night of the Troglodytes, held in a motor inn’s courtyard. I got there a little late this year, but the bikes were still on display and boy did they look good.

One of the best things about this event is all the two- and four-wheeled vehicles you see running around town. And when the sun goes down, the neon motel signs add another element.

Saturday played host to highly-anticipated event known as the Bonfire Beach Party, which followed the day’s racing events. Wildwood’s iconic Ferris wheel and merry-go-round paint the night sky until the bonfire is lit, and during this time spectators are able to walk through the pit area before it’s closed off for the next morning’s racing.

With beautiful weather and crisp ocean air in my lungs, I arrived Sunday morning. Two of the standouts were Jeremy Baye’s Flathead V8-powered Roadster and Cedric Meek’s killer ’34 Ford Coupe. My favorite part of Cedric’s car has to be the transparent front end, which is completely see-through with some gold leaf accents. In the light, it looks crazy.

I left the beach after the tide started to come in. Camera in one hand and an ice-cold Warsteiner in the other, I found a spot to sit out of the sun. The only thought in my head: The Race of Gentlemen is back. And frankly, it’s better than ever. 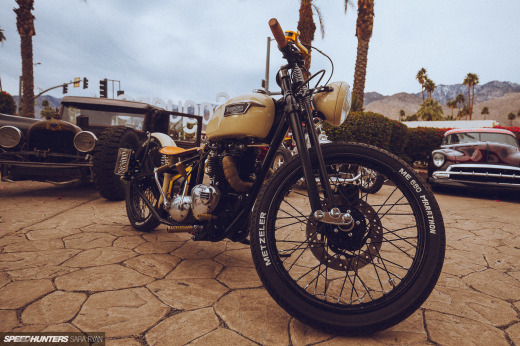 Wow, this looks like a blast! I'd love to experience these kind of events. Very photogenic.

Amazing pics mate! what a mood!!

Fantastic photography. Seems like the world is begging for a reason to simplify. Looks like a lot of fun.

Thanks for the great coverage of an awesome event!
Besides the racers out on the sand, there's a parking lot show for the custom car guys.

Now this is dope as hell!
Love how we're going back to the roots!

This looks amazing!!! More coverage of events like this please

I went a couple years back, and agree this is a great event! It's cool to see the yellow 27 car is back. IIRC it has a V8 (don't remember the make) mounted behind the driver, transmission bolted directly to the diff, and no radiator. Pushed it to the line, started, ran, shut it off before it got too hot, and got a tow back. I loved the craziness of it!

Much appreciated coverage. Went Sunday. So many people. All having a great time! I've been to see many types of motorsport. Everything from F1 to Figure 8 demolition derbies. TROG is one of a kind, run what ya brung, wring it out on the beach mind
blowing action.