“If a man does not have the sauce, then he is lost. But the same man can be lost in the sauce.” – Gucci Mane.

Well said, Gucci. For those of you unfamiliar with Gucci Mane, AKA ‘The East Atlanta Santa’, he’s a successful rapper with a penchant for face tattoos and red luxury cars on 24-inch ‘rimz’.

As women and men of the car scene, we are on a constant knife edge of scrutiny. No rare or expensive parts on your car? You’re lazy or half-arsed. One too many? You’re suddenly building your car for internet clout. Now, I’m not going to sit here and judge anyone for going all-out with a build; I wouldn’t dream of it. My favourite builds are often those with details that have been executed down to the minutiae. I’m also not going to look down upon those out there who can’t afford or justify spending dumb amounts of money on a pair of mirrors, for example. On a serious note, there are more important things in life than car parts, such as rent and food.

Now that my wise words of wisdom are out of the way, let’s delve into Pippa Brand’s 1993 Honda Civic DX.

This is Pippa’s second car, but not her first Honda. Before the Civic came a mighty Honda Jazz; even before then, Hondas ran rife in Pip’s family. In fact, she can’t remember a time in her childhood when there wasn’t a Honda Shuttle in her parents’ driveway.

The Civic had had a fairly typical life up until that point. It was purchased new by the same couple who owned it until their late years, at which point the husband sadly passed away leaving the little silver car in the care of his widow. She kept ahold of it for two more years until she also passed on, and the car was practically given away to one of their neighbours.

In the custody of its next owner, the EG received its first ever modification. A Subaru Impreza exhaust back box was fitted in place of the OEM pea shooter, although what benefits that may have provided escape me. With 89hp, it was actually down one horsepower on the mighty Jazz that Pip was used to, but she was over the moon and immediately began to save her money to put towards modifying the EG.

Being an older car, there were bound to be wear and tear items due for replacement at which stage Pip would buy an ‘upgraded’ item to take its place. Perished bushes for example meant new neochrome-coated lower control arms, and tired shocks and springs were replaced with an uprated set from an EK4 Civic.

Although they replaced tired original parts, Pip soon learned that you get what you pay for with some mods when the eBay lower control arms started squeaking unbearably over anything but the smoothest of roads. Genuine items were definitely on the agenda.

Being young though, there had to be some visual mods before any serious mechanical work could be undertaken; it’s an unwritten of the car scene after all. The original steel wheels were replaced with a set of Honda Prelude fan-blades in black glitter, and a second-hand carbon fibre boot spoiler was also fitted. It even came pre-lacquer peeled for extra patina.

On the subject of patina though, Pip’s Civic was looking a little worse for wear after a year of daily duties following seven years of sitting in a damp British garage. The paint was faded and flaking in places, and rust had started to make its way through the wheel arches. Even the ’90s-tastic pinstripes were beginning to lift way from the paintwork, so naturally when Pip got an incredible offer for all the bodywork repairs and paint to get sorted she jumped at the chance.

As is the way though, if an offer seems to good to be true it usually is, and it didn’t take long for the extent of the bodge to reveal itself. The car was three different shades of silver, and the arches were so full of body filler they could probably have stopped a bullet. This was where things started to turn around for Pip, as this setback sparked her desire to level the car up into a serious little fighter.

Parts acquisition was the next mission – specifically, all the items necessary to turn the Civic from a grocery-getter into the rowdy K-swapped weapon it is today.

Suspension was first though, as the squeaky arms and old EK parts had to go. A set of BC Racing coilovers were fitted alongside K-Tuned lower control arms for a full squeak-delete. A BWR tie-brace keeps the rear end tight in addition to the centre cross-brace for torsional rigidity. At the front, braking is taken care of by a simple yet effective OEM+ set of 282mm MG ZR discs with Honda Prelude calipers. The rear drums were retained, but as the fronts take car of 70+% of braking, Pip decided they can wait. With the car now able to corner and stop properly, it was time for more power.

The K20A2 was acquired from a breaker’s yard using Pip’s new boyfriend’s mum’s car, which I’m sure was not stressful in any way at all. At this point the car and the mass of parts were dropped off for the swap.

The engine itself sits in a partially shaved bay in Jazz Purple, with plenty of bolt-on goodies for extra power and reliability. Inlet and exhaust breathing is enhanced by a Hybrid Racing air intake on an RBC inlet manifold, travelling through the combustion chamber to a K-Tuned tubular exhaust manifold. Follow this down and back and you’ll travel along the Skunk2 MegaFlow exhaust system to that awesome period-correct back box.

Back in the engine bay, a Hybrid Racing injector rail provides sufficient fuelling, whilst a Tegiwa full-sized radiator keeps things cool under load. It’s a great looking bay, with a turquoise-painted cam cover for a bit of extra colour. Even the dipstick is a K-Tuned item for a little dress up, and the Hasport engine mounts are two great looking pieces of billet.

The K20A is electronically plumbed in by a quick release loom made by the very man who fitted the engine himself: Josh Slater at JB Slater garage. The engine map was taken care of by Jesse Halford at TDI South, meaning this pocket rocket is running 247hp now. That’s nearly three times the car’s factory output.

Driver feel and aesthetics were taken care of together, so starting from the inside the most prominent feature is the billet K-Tuned tower shifter for a more precise and positive gear throw. By this point the original shift action must have felt like stirring a ladle through a pot of soup. A Personal suede steering wheel with an NRG boss give Pip proper steering feel and control when driving the car hard, while Recaro Confetti seats and TAKATA Racing harnesses keep her pinned through fast corners.

The harnesses mount securely to the chrome Tegiwa harness bar, whilst the rear seats have made way for the Tegiwa cross brace between the rear suspension towers. Pip’s currently doing a full strip-down of the rear end to tidy it up. Just to keep an eye on the bigger cars this Civic keeps behind it, Pip has a full-width NASCAR mirror in the cabin.

Externally, the EG is a mix of trusty and unique parts for a simple yet effective visual package. The white Kosei K1 wheels were a straight swap for the glittery black Honda wheels, and they’re shod in UniRoyal Rainsport tyres.

Some of you may have just recoiled in horror at the prospect of a hot hatch not on semi-slicks, but bear with me. The weather in the UK is so dismal and wet that a set of Rainsports in the right hands will out-corner a much faster car on a set of race tyres, so these make perfect sense.

The paintwork itself was one of the last things to be done to the Civic. It’s in a shade of “I think it’s Daewoo Matiz lilac,” says Pip, but I cannot find anything online to confirm that. Denji headlights add a touch of aggression to the nose of the car, alongside the front lip which had unfortunately become a casualty of some full sends the week prior to our shoot. At the rear, the carbon fibre ducktail spoiler is a stand-out feature, whilst the clear taillights add to the overall playfulness of the little car.

The windshield scuttle panel is the most interesting though. Pip bought a carbon fibre item from Eastern Europe which the manufacturer assured was for RHD cars. The manufacturer was wrong. What they did offer though was for Pip to send them her OEM scuttle as a test-bed for a right-hand drive item, and sure enough, a few weeks later she received a shiny, new, one-off RHD carbon fibre item.

It’s the mix of touches like this alongside more reasonable items like the carbon-look NRG door mirror that appeals to me. Yes, you can go broke on a set of rims or a crazy big brake kit all round the car – and many people do – but by sticking to her guns and slowly yet surely upgrading the EG where it counts, Pip has built a devastatingly effective little fighter of a car. Taking neither herself nor the car too seriously has meant that this Civic is fun and full of character, and I would take this over a chequebook or heavily financed build any day of the week.

Long live the little lilac lightweight, and the vibe this car represents.

the "baseballcap lid flipped up" spoiler was and will always be corny...the rest of the car looks pretty nice.

IMO, this thing is a turd.

There is more, delete this article

Grow up. Where’s your car feature?

Why slate someone’s car. She built this car for herself and not you. Enough said

Didn't know this car was yours...
Build one yourself and get it featured because it's gonna be oh so good. 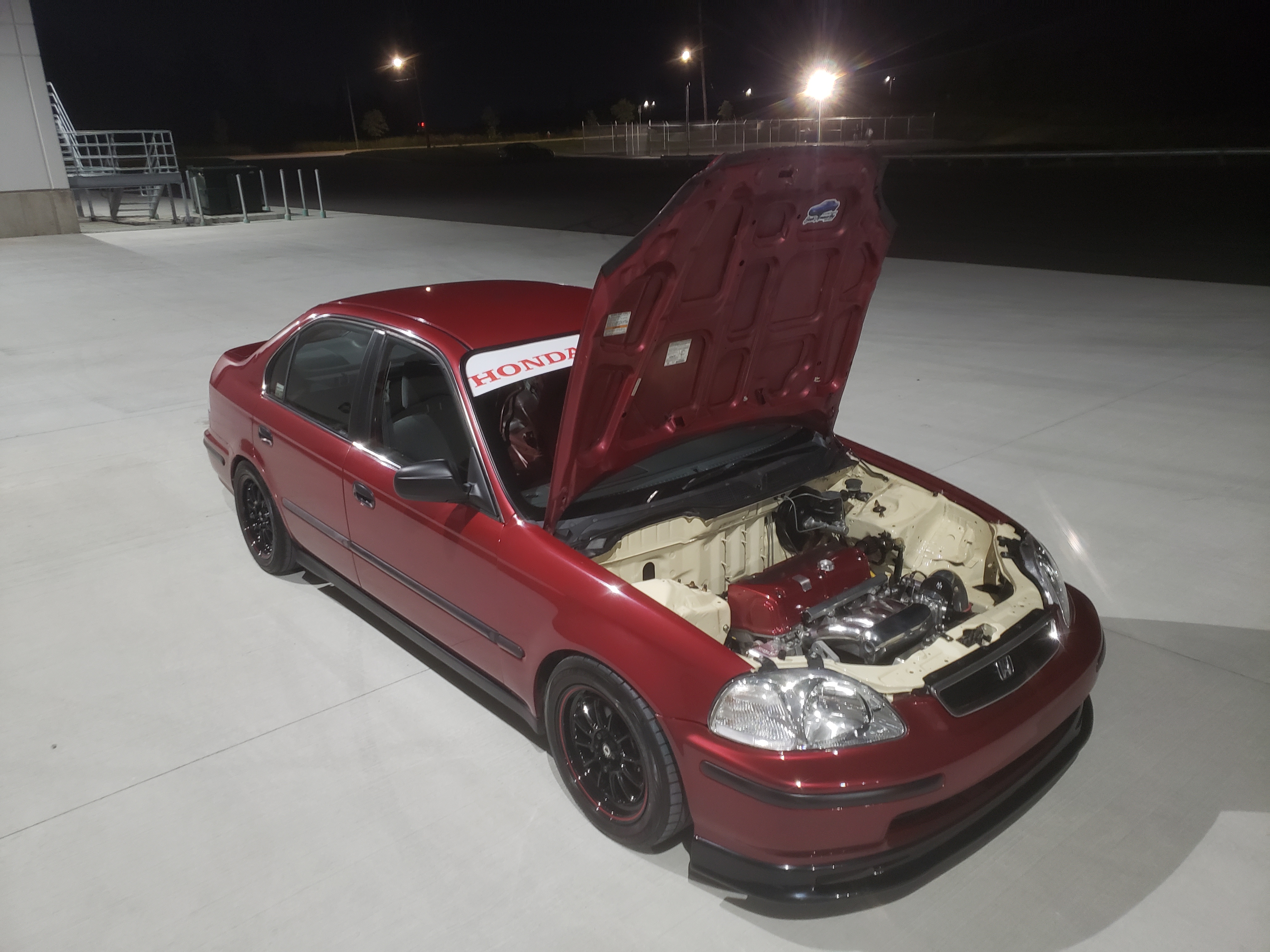 its articles and cars like these that make me stop scrolling, one off build, nice and simple nothing extra in the feature. classic speedhunters

the one off windshield scuttle panel is a nice touch

These K-Swap cookie-cutter Civics are getting out of hand

That car is aids. How did this make its way into SH? It's on what 500 TW tires. Get this POS off the website.

The spoiler looks weird
The rear drum brakes are simply a NO
The uniroyals are a really weak tire with an extremely soft sidewall. It will outperform nothing on them
The rear lights also look weird
the NASCAR style mirror is just... WTF!? Most pointless mod ever.

So yeah, it has potential, some things are really nice in it, but in the current state it seems weird and unfinished

Imagine doing what you want to your own car... Must be weird...

I do agree on the rear drums tho.

I like it, dig the colour and the rainsport tyres are a sensible choice for sporty daily driving in the wet, speaking from experience in the wet they are very grippy. For a budget build it's pretty nice.

People need to stop slating other peoples cars. She built this for herself and not to impress others. Can’t see you car being featured on here