Like so many kids in Iceland, Jóhannes grew up around cars. Hanging with his father and brother in the garage as they worked on the family Volvos – mainly 140 and 240 models – ignited the spark, and even before he could legally drive, Jóhannes was on the hunt for one of his own.

While most of his friends lusted after performance machines and supercars, Jóhannes had his own taste. He loved American muscle, but was determined to get a Volvo for his first car. You’re looking at that 240 right now, but it’s a very different car to the stock one picked up in 2006.

Jóhannes was only 14 years old when he found the 240 GL; it had a solid 280,000km on the clock, but the price was right. After a few days spent trying to convince his parents that it was a great idea, Jóhannes was able to buy the car using money he had saved from working part-time, and a little top-up from his grandfather, another Volvo guy through and through.

Soon after acquiring the 240, some small changes were made. Jóhannes sold his mountain bike to buy new poly bushings for the suspension, and then lowered the Volvo on shortened and stiffened springs. Bigger changes were on the way, though.

“After I got my license, I used the car with the original B230K motor for a few months, but then I noticed it was using more oil then usual,” says Jóhannes. “It was after summer 2009 that I decided to swap the engine.”

This is where a 2001 Ford Mustang donor car comes into the picture.

Remember that bit about Jóhannes’s interest in Volvos and American muscle cars? Well, by re-powering the 240 with a 4.6L Modular Cobra V8 – and the rest of the Ford’s running gear, including Tremec TR-3650 5-speed gearbox and eventually a 9-inch rear end – he could tick both boxes in one package. So that’s what Jóhannes did.

The swap was fairly straightforward, save for the engine bay requiring some good ol’ hammer work to open up some extra room for the V8’s DOHC heads.

Right away the Volvo was a different machine.“This was my only car at the time, and I used it to drive to school, work and other activities,” says Jóhannes. The latter included burnouts - “a lot of burnouts!”

Of course, the initial thrill was always going to wear off, and soon enough Jóhannes found himself having to really lean on the engine. Whether he’d just become used to the extra performance or the engine was losing power, something needed to change, and Jóhannes found exactly what he was looking for in a Vortech V-2 supercharger.

Before the blower went on though, Jóhannes knew he’d need to bring the Ford V8 up to spec, and this is the point where things went south. There wasn’t any problem with the engine or the numerous aftermarket performance parts he collected for it, but with the labor employed to undertake the work. The car ended up going from garage to garage without much happening, and after a while Jóhannes lost all interest in the project and parked it up.

The spark was eventually reignited by Jóhannes’ brother, but it took seven more years from then and the help of a few good friends before the Volvo saw the light of day again.

In 2018, the car was ready for the streets. An MMR 4.75L stroker kit incorporating a brand new 5.0 Coyote crankshaft had been fitted, as were H-beam rods, an MSD ignition system, Ford Racing fuel injectors and a Holley ethanol sensor amongst other things. In the driveline, the Tremec 5-speed was rebuilt and strengthened, and a McLeod twin-plate clutch and Fidanza aluminum flywheel were fitted.

The interior has been kept somewhat original, but now benefits from the addition of a half cage, Recaro front seats, Volvo 240 Turbo rear seat and door panels, and a small Holley digital display.

Outside is a similar story; Jóhannes saw no need for extreme body modifications, instead settling on some subtle changes. There’s an Autoplas rear spoiler and window louver, and black detailing in the factory headlights, but that’s it. Even the colour – Volvo 403 Silver Green Metallic – stays true to the car’s original paintwork.

In the wheel and tire department a meatier package was required to get the power down and improve overall roadholding, and for this aspect of the build Jóhannes chose Fifteen52 Tarmacs in 17×8-inch front and 17×9-inch rear fitments, with 225/45R17 and 255/40R17 Federal SS-595 rubber.

Handling upgrades have evolved from the original lowered spring swap that Jóhannes made early on in his ownership to custom QA1 coilovers in the front and GAS coilovers out back, plus adjustable upper wishbones and panhard bar, and larger balance rods at both ends of the car. The brakes came from the Mustang donor but have been upgraded with drilled and slotted Powerstop rotors, 281mm front and 267mm rear.

For the last few years, Jóhannes has been working out all the little bugs and kinks that you can expect with a cross-bred build, but he couldn’t be happier with how his beloved Volvo has turned out – especially when the 10psi of boost hits.

That doesn’t mean he’s done yet though – this is a project car after all. While Jóhannes currently has his hands full juggling fatherhood and work, there are longterm plans in place. The engine has been built to handle a lot more power than it’s currently making, so why wouldn’t he want to give it a gentle nudge?

Hearing Jóhannes’ story, I just wish I’d had more time to spend with him and his ‘240 R’ on this trip. But who knows, maybe I’ll be able to catch back up with him on my future visits home, and check in on his progress.

More stories from Iceland on Speedhunters

My uncle has the similar Volvo model, and it was built like a tank.
Just look at the bonnet hinges. Extremely beefy and almost indestructible.

Well, that's refreshing to say the less. Nice build and write up buddies keep up the hard work both of you.
I got 2 points that bogger me: who was behind the idea of adding a half-cage to a tank? and how the hell at 14 years someone was able to work and save money; unless helping a family memeber isn't this considered child abuse if under 14?

I guess the half-cage could be there for looks or later for harnesses.
I mean...if he were serious about racecar-ing the interior he'd bin the rear seat, not upgrade it.

Back then, kids ages 13-14 could legally work but only of the work is considered "light" meaning not physically demanding or dangerous. Im pretty sure its still like that today. I for example, started to work when I was 15 at a local grocery store. But it differs from town to town.

I will have to dig into the tank question.

Plus financial help from family members is pretty normal.

Yup this is very normal, i've started work at 16 during summer vacations; but i was referring to the UN regulation that defined the minimum legal age for work or else it would be considered as child abuse which i think it's 14.
And help from family members is a must at this age,my mom helped me buying my 1st moto-cross (definitely a 2 stroke).

Did some research and I basically found what I wrote.

Might be a case of a 'family owned' business as well. Where I lived, that was deffo the case. As long as no one gets hurt it doesn't bother anyone I guess.

thank you for the link and your effort brother

The cage was mainly for strength purposes but he also wanted cage without having to drill in the dash as well as blocking the entry to the rear if that makes sense.

This shows how versatile of a platform the 240 can be
You can put in anything you want and it still is robust like a tank!

Great build and it’s nice to see others using the Ford Mod motor. I also have a Vortech supercharged cobra engine powering my build as well! 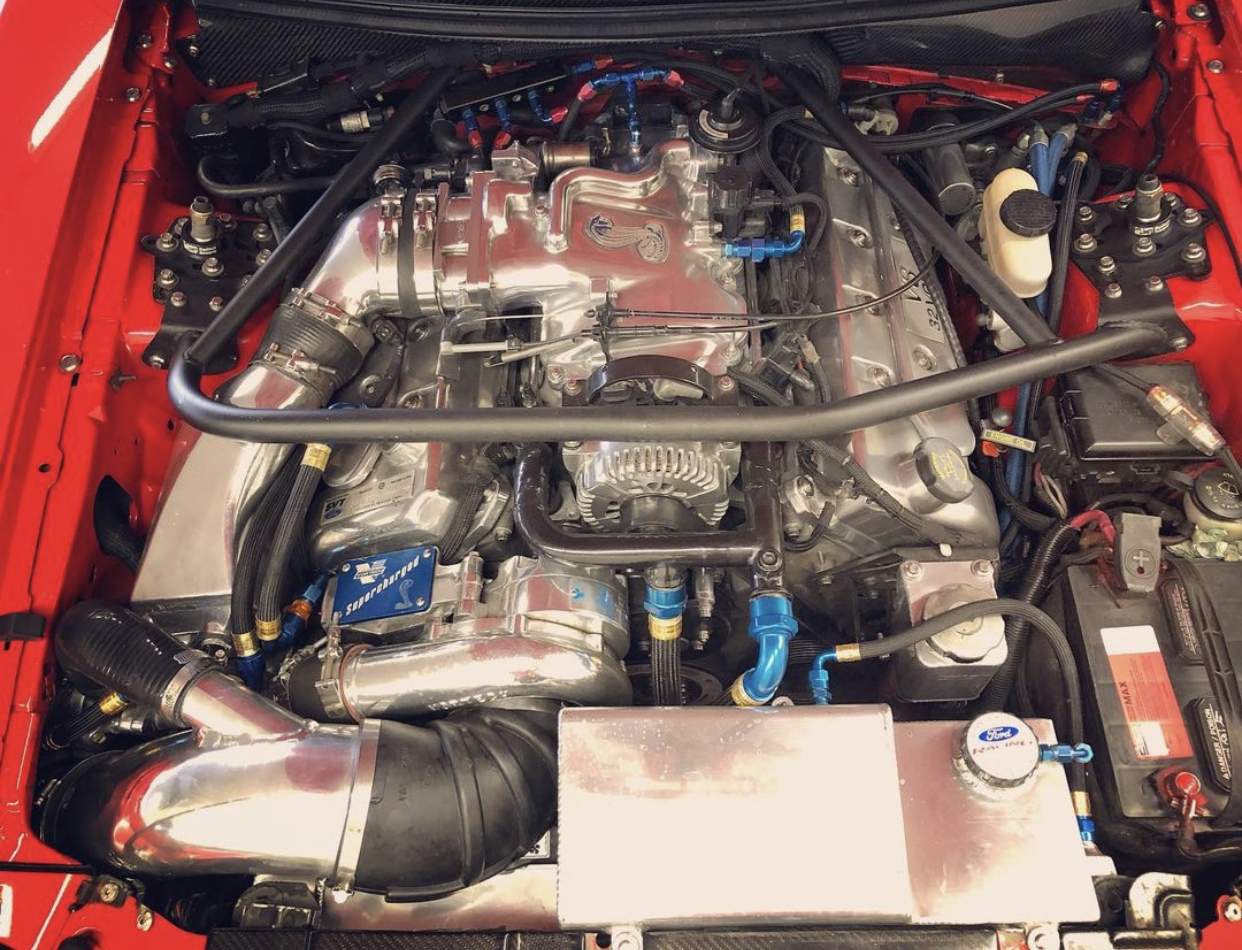