One thing I’ve never really understood is people who like to tear down their local car community. It’s entirely too common to hear of people lamenting over how their scene doesn’t compare to some other one.

Always looking over the fence at the next person’s grass is no way to live life, and we can’t all live in Japan or California.

If you truly despise your surroundings there are two solutions: Move/travel, or simply make it better. Become the change you want to see, and all that mess.

JCTD runs on a pretty simple concept: Get some of Ontario’s best older Japanese cars out on the track together outside of a competitive setting.

Apart from a few brief driver’s meetings and an on-track schedule, very little is formalized. Drivers and spectators pay just enough to make the event work; there are no vendors, no models, no cruft. Come enjoy the cars and the company for as long as you wish, and leave remembering exactly why these cars captured your attention in the first place.

Despite everyone’s least-favorite spiky virus, the first JCTD event was rather successful. So, naturally a second was organized for 2021.

Ontario is currently in a better state of affairs when it comes to Covid, so this event could be promoted earlier and to a broader audience. Word even spread to the United States, which is how the guys from Industry Garage caught wind.

Additionally, this year JCTD had access to the main track at Shannonville Motorsport Park, the larger track that provided some of the faster cars a real opportunity to stretch their legs.

Once again I was able to head trackside for a few hours, and just like the first event I was far from disappointed with the turnout.

At an event like JCTD the track is the focus, but ignoring the parking lot would be an unforgivable sin.

This Z is such a fresh build that you could faintly smell the paint off-gassing, the final coat having been laid down just a few days prior.

Late nights bled into early mornings as assembly continued, even at the track.

While not quite as drastic as the Industry Garage build, this Z also features a considerable amount of carbon fiber. I even overheard the owner saying he couldn’t get the car lower because the springs were simply too stiff for the car’s new weight.

I’m not sure what S-chassis prices are like around the world, but they’re pretty crazy here in Ontario, even for somewhat neglected examples. This makes the truly clean examples worth appreciating.

This S13 was very nicely put together and gave off serious late-’90s and early-’00s Japanese tuning vibes thanks to the white tails, vented fenders and Work Rezax wheels.

The AE86 beside it was no slouch either, and looked mighty functional on a set of RAYS Volk Racing TE37VSL 1920 Limited wheels.

I feel like a broken record admitting just how much more I like Hondas from the ’80s and ’90s as time goes on. These cars, done subtly, are truly timeless. I’m curious to see how this segment continues to evolve as years pass and values climb.

For those of you who have asked about a Speedhunters/Speed Academy collaboration, no feature promises quite yet, but if we keep bumping into each other at this frequency we just might have to set up something official.

Speed Academy‘s Ford SVT supercharged ‘Flexxus’ was in the pits for a bit, and it wears another set of reimagined OEM wheels by Augment Wheel Company. Yes, those are Supra Celica-inspired wheels, upsized and in a 5-lug fitment.

At an event like this TE37s are more than expected, and this NSX wore its set in absolutely stunning fashion.

Bringing together Japanese legends to look at is one thing, but ‘track day’ is the focus here and having all of these properly-sorted cars just sitting around in the paddock would be a darn shame.

Thankfully, the track rental wasn’t for waste and most of the attendees took advantage. JCTD is a great event for people who might just want to dip their toes into tracking without worrying about someone out to ‘win’ the day.

As mentioned, nothing is timed, but vehicles are grouped by driver proficiency. This creates a very safe event for all.

I think in total there may have been two track offs the entire day – including the near miss above – an extremely small number given the length of the sessions and number of cars circulating.

Catching the ear of Nathan Pillai, one of the event’s corner marshals, safety is something JCTD pride themselves on. If he saw a new driver doing something that might result in a dangerous situation he’d radio it in. At that point another volunteer would let the driver know how they can make their next sessions safer.

Because there’s no sense bringing all these beautiful cars together if they’re just going to end up balled up in a corner. “These cars look so great on the track, and we just want everyone to have a good time,” Nathan mentioned while keeping an eye on his brother turn a few laps in his GT3.

In general, a few of the owners I talked to trackside shared a similar sentiment. Most of these cars would easily be outpaced by something modern, but modern equivalents are not as engaging to drive and arguably not as cool to look at.

These older cars just have a bit more edge to them, and that makes the driving experience more immersive than cars laden with protective assists.

Also, nothing sounds quite like a nicely-tuned Japanese engine screaming down a back straight.

At the end of last year’s event recap, I posted that the JCTD crew wanted to hit bigger and better in 2021. I’d say they did exactly that.

If you’re in the Ontario area, have an older Japanese car and are ready to stretch its legs a little bit, don’t miss out on the 2022 Japanese Classic Track Day. I think they’re only going to get bigger and better from here on out.

Where was this? Yes it can be looked up, but as the article author shouldn't you mention where this took place without requiring your readers to go find it themselves?

The location is mentioned, and written in the background of the first photo.

Looks like it was in Shannonville Motorsport park this year. Ah yes, more than 2 hours away from the GTA and even longer for everyone south of the GTA. Why doesn't the author cover events at tracks near where people actually live?

Even in the US most tracks aren't located anywhere near "civilization."

Nobody who came to this event lived close to this track , everyone drove at least 1.5hrs to get there , not to mention the guy who came from Maryland USA , don’t worry next year we will come to a track south west to accomodate the people out west who don’t want to drive far …

Near where you live is relative is it not?

Such a great read Dave , and the photos are exceptional as always . Thanks again for this !!

Thank you once again to Dave and Speedhinters for the amazing event coverage!

Loving the coverage and especially the Elvis reference!

Great pics and write-up. Was hoping to see some 3000gt VR4s or Stealths

There was one, guess it slipped through the cracks of my cutting room floor! 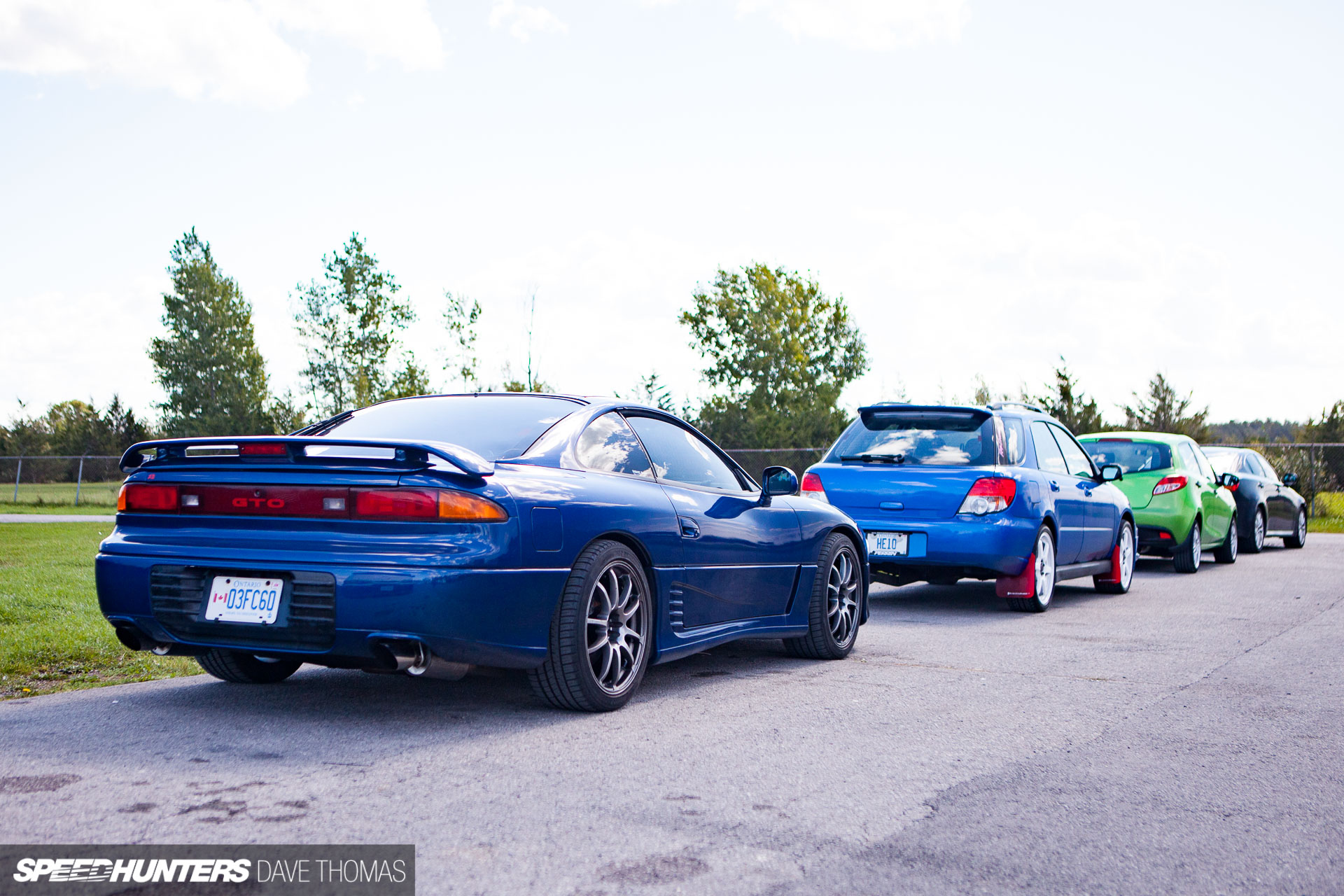 Thank you for the coverage Dave. Dream come true.

Amazing as usual! Thanks again Dave and The Speedhunters for featuring the event!

Outstanding coverage and amazing photos Dave!! Such a great time as always. It was fun to meet some people from the Ottawa and Montreal area as well given that Shannonville is roughly halfway between them and the GTA. That lady driven FC was so cool! Cant wait for next years event!

Great catching up with everyone at this amazing event, we Speed Academy dudes will be out in force next year with an old Celica and some other JDM junk we've got kicking around.

Geez. What's the info on that blue z?

No old Subarus or Evos? Was hoping to see some Rally Machines

Maybe if I get my car running by next year and I hear about it well enough in advance, I should try and make the road-trip from SK to partake, tho neither of my cars are Japanese

What kind of car do you drive?

i wish i'd known about this event, would have love to attend. OG '95 GSR integra , 2nd owner.

Hey Chris , sorry you haven’t heard of the event , follow us on Instagram for updates on the next event @japan_classic_trackay or email us at japanclassictrackdays@gmail.com to receive updates

Geez. What's the info on that blue z? I don't know why it sent as a reply to another comment