Over at Auto Project-D in Saitama, one man is embracing the Japanese philosophy of monozukuri – the art of making things by hand – and applying it to a French rally legend.

This Renault 5 Turbo is Higashitani-san’s personal project, and outside of running a prestige sports car dealership, he is restoring it during every available moment.

You might remember me introducing the build last November, and then some of the dismantling process in February this year. It just goes to show how busy Higashitani-san is and also the care he’s taking with this project.

The Japanese do things a little differently. They tend to be painfully pedantic and also appreciate the natural beauty of their work, something which tends to be overlooked by others.

While researching Japanese metal work, I stumbled across the kiribame method of tankin metal work – and a pair of special scissors that cost the equivalent of US$35,000.

Tankin is the art of shaping metals into ornamental and functional vessels. Various metals are hammered, gilded, dipped and oxidized into multi-layered, multi-textured works of art. One of the masters is Okuyama Hoseki, and I urge you to check out his work, if you’re into that kind of thing.

But of course, the most famous form of Japanese metal work must be samurai sword forging.

There is a deep bond between blacksmith and iron which is unique to Japan. It was believed that the highly-polished blades of samurai swords were able to fend off evil, even if not used for fighting, which made them highly valued amongst samurai and noblemen alike.

Japanese chef’s knives are also renowned all over the world for their strength, durability and light weight. They are super-sharp, and the best are sharpened by hand using an organic rock grindstone. They say it takes three years to learn how to hammer and a lifetime to learn how to sharpen a knife.

Some of those knives take months to hand-forge, and the previously mentioned US$35,000 scissors take almost a year to perfect. That said, I’m not at all surprised it’s taken Higashitani-san so long just to get the Renault up onto its rotisserie and start cutting away the rotten bits.

And there are plenty of rotten bits.

Higashitani-san will cut out the infected areas and replace them with pieces of sheet metal, which are formed into exact replicas by hand.

In the workshop, while there might be all sorts of presses, lathes and welders, you won’t find Higishitani-san using any of them to form the replacement sheet metal. I asked if he might use an English wheel, but he shook his head and proceeded to show me how quickly he could form curves and bends using his hand tools.

Apparently, this is the way the majority of body shop panel beaters still work in Japan. And it’s not just the local guys either; the tradition of monozukuri goes all the way to the top.

Eisuke Yoshino makes prototype car bodies for Toyota at the Production Engineering Development Center. Yes, you read that right. He builds prototype panels and parts, by hand, using hammers and sheet metal, without measuring, with only a 3D model to work from. If needed, he’ll create his own jigs to form the panels over, but that’s all the help he allows himself.

Not only are the Japanese building Toyota prototypes by hand, but also the country’s famous Shinkansen. The first trains, the 0 class, had their rounded bullet-shaped nose cones shaped by hand. The aerodynamic shapes were formed using nothing but a hammer by one man, Kiyoto Yamashita, who had previously honed his skills at a local garage. To this day, craftsmen still shape the E5 Hayabusa trains by hand, although simple cutting and bending is now done by machine. Man and hammer are irreplaceable.

By the time Higashitani-san has finished patching up this French icon, I’m sure a few seasons will have come and gone. I’m also sure that this R5 Turbo will look and drive as sharp as a samurai’s katana sword when it’s finally complete.

How Cool Is This R5 Turbo Resto Project? 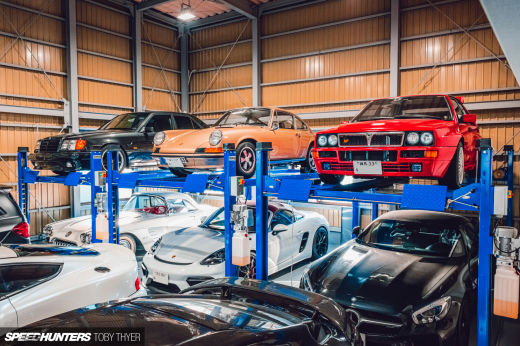 A Quick Peek Inside Auto Project-D

Good to see this skills in the age of computers...

This is a very similar approach I would like to take on my project once I actually get one. Very minimalistic. Awesome feature and keen to see where this goes next.

Wow this is fantastic to watch and full respect to these guy's and their talents in today's throwaway society.
I must get on with my Renault 16 TX that I want to take to Le Man's 24.

Now that sounds interesting! Definitely keep us updated on your project! Maybe tag us on Instagram or send us a message!

I love watching blacksmiths and panel beaters work their trade. However, I suspect you may have exaggerated the minimalist aspect of this. It's likely dozens of hammers, each with a different purpose, shot/sand bags, dollies, stumps, slappers, and spoons that are employed. Still much more difficult than using an English wheel, power hammer/yoder and bucks.

Let me know if I am wrong! I can't even begin to imagine how subtle imperfections could be removed from a compound curve with only a hammer.

Hey Mike, you’re absolutely right, I was only being dramatic. Of course these guys have an arsenal of hammers to shape the metal! You should definitely search for Okuyama Hoseki on you tube, there’s some great videos of him working!

Toby, this was well written. I enjoyed reading it. Sometimes with Automotive culture, we focus so much on the parts that go into a build, which are great, but sometimes the HP numbers and specs detract from the romanticism that is the CULTURE we so enjoy.
I very much liked the story that was told. This was well balanced, between the details of the build and the passion that it takes to do it. This is the way many of us would like to imagine our build story being told.

The journey is just as important as the dyno sheet, cheers Tim!

This is exactly the kind of article that has me constantly checking SH for updates. The sheer passion and craftsmanship being shown here is astounding. When you see someone bolt on parts, then labelling it "built not bought", expecting praise.... this is the real deal.
Thank you for sharing this with us all

Soup Motoring Classic's Esprit restoration and Bad Obsession Motorsport Project Binky has upped the ante in this kind (note: OC) of work... they even mix it with filming their work.

I'll add Retropower in the mix.