SHARE Designing An Icon, Driving A Legend: Akira Teshima & His 22B

This is not a story about the World Rally Championship-inspired holy grail of Subarus, the Impreza 22B STI. It’s a story about how a 22-year-old university freshman got a lucky break as a designer in a small automotive company in Japan, and helped create a car that became an icon.

This is Akira Teshima’s story.

Right at the end of the 1980s, Subaru entered the WRC with its new Legacy sedan. The symmetrical AWD system that underpinned this model was originally designed to tackle Japan’s mountainous terrain, heavy snow and torrential rain, and for this purpose it proved to be reliable and effective. It was also the perfect recipe for a rally car.

The Legacy’s crowing glory was an outright win at the 1993 Rally New Zealand with Colin McRae at the wheel, but by this time Subaru already had a new and vastly improved rally car base primed for the 1994 season – the GC8 Impreza.

Of the original Impreza design team, Akira Teshima is today the only one under 60. While talking with him about writing this story, he told me the lead designer, Hidefumi Kato, was now over 80 years old and probably wouldn’t want to be disturbed.

While studying product design at Tsukuba University, Teshima-san rode motorbikes and drove a Nissan March Super Turbo, but deep down he lusted after Lancia’s rally-bred Stratos.

Teshima-san is a big fan of author/illustrator Shuichi Shigeno, and especially his iconic manga Initial D. Much of Teshima-san’s life has run in parallel with themes and characters from series: He grew up racing bikes and cars on the touges around Ibaraki, then progressed to competition circuit racing, and owns a two-door Impreza, just like Takumi Fujiwara’s father, Bunta. If that wasn’t enough, Teshima-san now lives in Gunma, Initial D’s real-world setting.

Much of the Initial D series took place around Mt. Haruna (although the name was changed to Mt. Akina), and in the years since this area has become a mecca for drivers wanting to relive the nostalgia of the manga. If you take a drive here at dawn and are gapped by a blue Subaru, it’s not the ghost of Bunta Fujiwara – it’s probably just Teshima-san out for a drive. He’s a bit a legend around these parts.

There was something really special about seeing this 22B attacking the mountain roads of Mt. Haruna, but also bizarre knowing that the guy driving was actually one of the GC8’s original designers. I couldn’t wait to hear Teshima-san’s story.

Naturally, we found another Impreza owner, who, just like the Initial D storyline, was driving his father’s car, although not for tofu deliveries.

We then stopped off at an iconic Initial D location; do you recognize it?

After the 22B shoot, we headed back to Teshima-san’s office, which sits above a boutique Scandinavian furniture shop.

The first thing I noticed here was the Italdesign Giugiaro ‘Blouson’ Bridgestone bike, which sports the same silver paint and red pinstripe as the Subaru SVX and Isuzu Piazza.

In 1989, Teshima-san was one of four freshman accepted into Subaru’s design department, something he describes as an extremely lucky break. This was around the time that the Japanese bubble economy was deflating, and small companies like Subaru were suffering.

Some of their long-time designers had left or retired, and Subaru desperately needed a new model to keep them relevant and profitable. With the Impreza, Teshima-san was responsible for facets of the exterior styling, including the bumpers, lights, side mirrors, emblems, body trims and wheels.

The GC8 was primarily designed for motorsport homologation, but it also needed to be stylish and practical if it was to sell well in both domestic and international markets. It hit the mark as an all-rounder, and even won a design award in 1992.

It was fascinating to hear Teshima-san’s stories about the design process. Amazingly, many of the defining, iconic elements of the GC8 came about from practical – if not annoying and restrictive from a design standpoint – necessities. For example, did you know that the original designs for the Impreza used a flat roof? Because of budget and tooling, Subaru decided to use the sunroof from the SVX, so the Impreza’s roof had to be convex to accomodate it. Ultimately, this was beneficial for the likes of Colin McRae and Richard Burns, as it opened up extra headroom for their helmets.

Another silver lining is the design of the Impreza’s wheel arches. Because there were so many model variations, plus three different body styles and countless factory options, the team designed the wheel arches to suit all sizes and widths of wheels. Teshima-san recalls fitting a wide variety of wheels to the car during the modelling stage to ensure the aesthetics remained well balanced for all of them.

I was interested to know where the inspiration for some of the Impreza’s styling cues came from, and Teshima-san was happy to share. With regards to the front bumper, apparently the air intake opening is the same size as the Lancia Delta’s. Brake cooling was inspired by the R32 Nissan Skyline GT-R, and the embedded fog lights were an interpretation of the WRC competition rules at the time. The side mirrors were of the same design used on the Legacy, but Teshima-san revised them to be more compact.

Initially, the Impreza was designed as a four-door sedan, compact but roomy and with plenty of boot space. The wagon version was a transformation of the sedan and was intended as a weekend getaway adventure vehicle. But the most desirable, iconic, lightweight and aggressively balanced body style – which the 22B ended up being based on – came about because urbanites in the United States needed a compact car for office commutes.

That’s right, the two-door coupé version wasn’t designed because it looked cooler or because it was lighter, but because that’s what the US market needed at the time. What’s more, it was designed in a single day. Teshima-san tells me that when they found out they needed to make a two-door version, they literally rubbed out the door panels on the clay model and scraped in new ones.

Teshima-san showed me some amazing images of the modelling process and various prototype bodies from the Subaru factory and design center. Unfortunately, I wasn’t allowed to photograph any of these because of intellectual property compliance. In fact, Teshima-san wasn’t even meant to have those photos at all.

As we all know, the quirky little Impreza went on to do great things, but this is where Teshima-san’s direct involvement ends. He soon realised that car manufacturing and design – and especially at Subaru and in Japan at that time – was extremely conservative and did not allow for artistic expression of its designers.

Teshima-san waited until the promotional publications and release of the GC8 were finished and in 1992 said goodbye.

But this wasn’t the end of the collaboration between Teshima-san and Subaru. He continued to work as a freelancer and consultant under Teshima Design, producing STI parts and styling emblems, and body parts for S-series special editions.

Nowadays Teshima-san designs all kinds of products, but his biggest sellers are his rather snazzy glasses frames and golf clubs. The clubs are in the top three best sellers in Japan and are used by pro golfers across the globe.

It’s a bittersweet story of a talented young designer who became frustrated and disconnected with corporate Japan, even though he was part of the team that produced one of the greatest rally car base models the world has ever seen.

Despite that, Teshima-san obviously loves his STI 22B and motorsport in general, and I think he is genuinely proud of the work he did at Subaru.

Now, I just need to find a frame for my original Akira Teshima sketch of the legendary GC8.

That's gotta be some of the coolest memorabilia ever!

Such a spectacular article. As an avid GC owner this was chock full of surprises and wonderful images of the man and his work. Thank you for this. Supremely jealous of the sketch, and that your eyes graced those images mentioned that were not allowed to be photographed! Thank you again regardless.

A nice reminder that the most important part of the car culture is the human element. Great article on a fascinating character. Thank you!

Designers at car manufacturers are always bound by a lot of things from fully expressing their artistic vision, from corporate decisions to safety regulations. Hence why independent design houses and coachbuilders are a great thing.

How do you keep finding these wonderful locales to take pictures of?

You and Dino should put together a coffee table book SERIES with your various photos of Japan.

The 22B is like Peter Pan. The 22B design never grows old, and adored by many who knew about it.

As I understand it, Subaru changed the STi to a sedan to make it easier for buyers to convince the old ball-and-chain to let them get it.

Great interview and wish i could meet Teshima San someday!

Amazing.
When I can not drive the icon, my dream car... 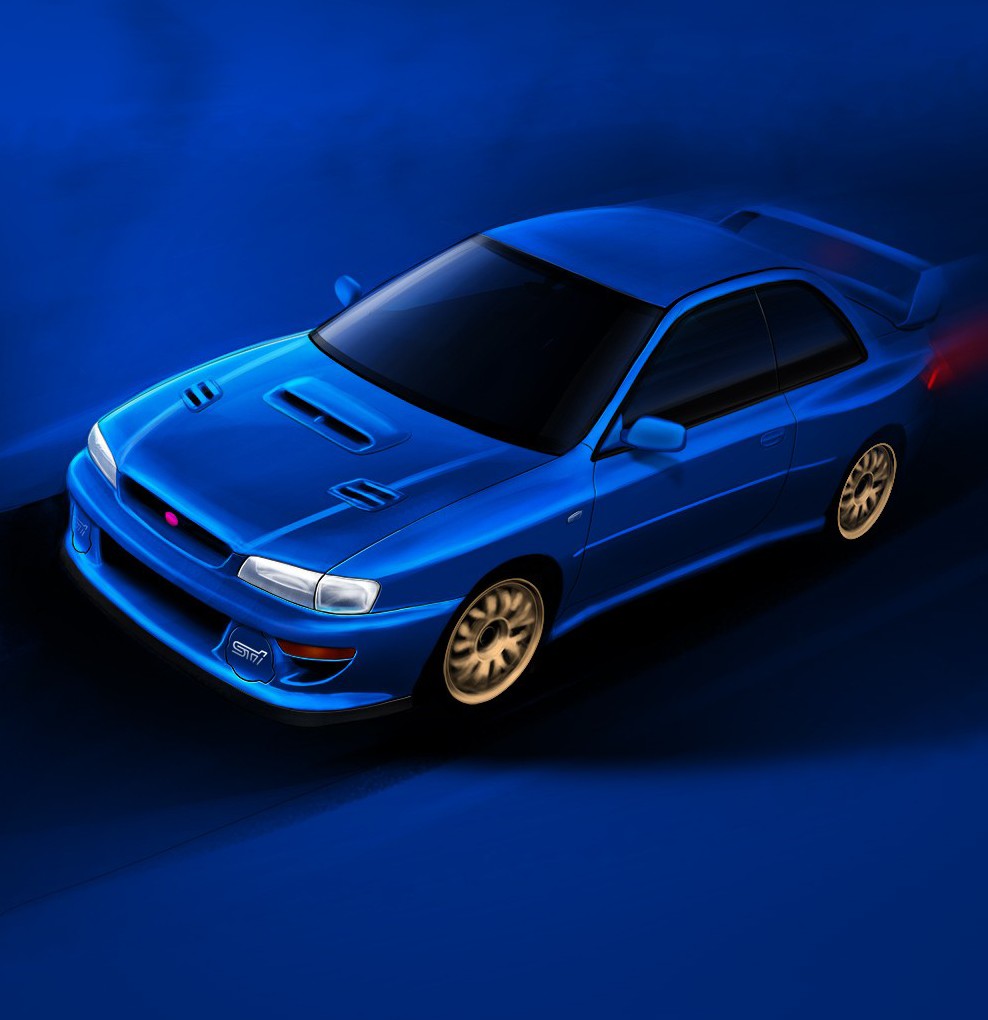 Brilliant article, it's always a joy to hear some inside information on design processes such as this.

Such a heartwarming story... Huge thanks to Teshima-san for all, that he'd done!

This needs to be a documentary film. You could have made this article 10x as long and it still wouldn't have been long enough for me.

I totally agree, but with the intellectual property issue, I couldn't publish half of what he showed me and some of what he told me. We might have to ask Subaru to make something! unless there is an official documentary I don't know about?

Thank you for this Toby. A nice window into this world.

One day, i want to go to Japan and meet Teshima-san.