Flicking through online magazines like Speedhunters, it’s great to see slick photos of project cars and custom builds, and to read stories about how and why those cars exist. But don’t for a moment think that creating these features goes smoothly every time.

This month I had two shoots booked for two very special cars. Both were a few hours’ drive away from my place and both have been in the process of being built for a few months. The first, a black nut-and-bolt-restored GC8 Subaru Impreza coupe; the second, a Tyrrell P34 ‘six-wheeler’ F1 replica hand-built by Watahiki Body Works. What could possibly go wrong?

Getting a story together on Speedhunters takes quite a bit of planning. The basic steps are as follows: find the car, contact the owner, book a time and location, attend the shoot, write the story and edit the photos. Seems pretty straight-forward? Try navigating through all that in a foreign land and a foreign language that uses three different alphabets.

The first step is one of the most thrilling. Finding the car means either having a car recommended by a friend, seeing it in person at an event, or literally trolling through magazines, Instagram and Facebook. I even use Google Maps to find interesting builds or links to builds via garages, body shops or dealers.

The second step is always a bit hit and miss. Some owners will decline an invitation to feature their car on a public website, but more often than not they are well chuffed to have a spotlight thrown on their pride and joy. Personally, this step is probably the most difficult for me to navigate.

Thankfully, my spoken Japanese is definitely improving daily and it’s becoming easier and easier to say what I want to say.

At the beginning it was pretty time-consuming to decode Japanese messages using dictionaries and Google Translate, but these days I’m doing less copying and pasting. Of course, I still get it wrong sometimes, and this is when things start to go awry. I find that even though the Japanese love making plans and triple checking things, they can be pretty vague at the same time.

Once an owner is on board, organising the shoot can go one of two ways: quick and painless or long and arduous. Usually, if the car in question is used regularly, either as a daily driver or weekend weapon, owners are pretty quick to set a date for a shoot. But if the car is going through a build process, being repaired or perhaps doesn’t even run at all, arranging a time can become a game of email cat and mouse which can go on for months.

Finding a location to shoot is another step which I really enjoy, but it can also become a logistical nightmare. It’s pretty fun using Google Maps as a tool for scouting locations, and Google Street View is an absolute godsend in terms of deciding whether a location will work or not.

It starts getting tricky the further away the cars are. Traveling into other prefectures means either a three-hour drive or an hour’s flight, so in order to keep things profitable as a freelance photographer it’s essential to book multiple shoots for the one or two days of travel. You can imagine trying to organise all the previous steps for multiple cars in unfamiliar cities with limited windows of time, good lighting and, let’s not forget, good weather.

Since I’ve been shooting stories for Speedhunters my shoots have worked out well, for the most part. I’ve been able to find some interesting cars, met some great owners who have become friends, and travelled to some fantastic places all over the country. It was all going pretty well – until this month.

I had been looking forward to shooting the black GC8 coupe for months, my excitement tripling after briefly seeing it in person at an Idlers event at Tsukuba Circuit. It was so tasty that it was snapped at the event by Dino, too.

The car was built by Yaito Auto, a custom shop with some impressive builds under its belt, including owner Yaito-san’s E46 BMW M3. Black cars seem to be a bit of a theme with this shop, as are those painted gold.

The GC8 didn’t just get any old engine refresh and masking tape respray; this was a full stripped-to-the-shell rotisserie rebuild with so many factory fresh parts it was as close to a new car as you can get. So, you might be able to imagine my disappointment when I got news of the car’s sale. I had waited so long for the other car on the itinerary to be finished that this one was now off to its new owner, on the other side of the country.

Even so, past experience has taught me that these kind of garages always have some gold or pearls to make up for missed opportunities.

My visit to Yaito Auto wasn’t a complete loss; the yard was full of project cars waiting to be resurrected, and a couple of Yaito-san’s mates were there with their Beemers so we took out an E30 for a little drive and an impromptu photoshoot. It was so much fun I almost forgot why I’d come in the first place. Almost.

After a refreshing bottle of Dekivita C (basically a fizzy Japanese Berocca drink) I said my goodbyes to Yaito-san and his friends and headed for Watahiki Body Works outside Mito City.

After not seeing the GC8, the excitement of seeing the Tyrrell was palpable. It was all looking very promising indeed.

A flatbed lorry was parked next to a Ferrari Testarossa which was sitting in front of a Toyota 2000GT, so I asked Watahiki-san if I could snap some things in the yard while he loaded up the six-wheeler.

Once it was on the truck, I loaded up Google Maps on my phone to show Watahiki-san some of the locations I had found to shoot the Tyrrell. I’d picked some back streets away from traffic because I knew the F1 replica wasn’t road-worthy, but I wanted to get some rolling shots. I wasn’t sure if Watahiki-san would want to drive the unregistered car at all, so I half expected to be adding motion in post-production, but hoped to get it on the road anyway.

But this is where my fantasy ended.

You see, through our communications I had misunderstood what Watahiki-san had been saying about driving the Tyrrell. I thought he was saying that it couldn’t drive on public roads, but in actual fact, he meant that it couldn’t drive at all. As it turned out, the Suzuki Hayabusa engine still only had a Bluetooth connection to the differential (read: it wasn’t physically connected at all).

Because of that, Watahiki-san had found a section of closed road near his friend’s house where we could unload the Tyrrell to get some beauty shots. His friend just happened to be driving one of Watahiki-san’s wide-body 911 creations, with its front and rear arches and bumpers hand-formed from aluminium. These two looked stunning together, but the location was pretty uninspiring to say the least.

Nonetheless, I shot the entire car, not wanting to miss an opportunity. In the back of my mind though, I knew we probably wouldn’t run a story about a 96% finished Tyrrell six-wheeler. Because I think you’ll all agree, this deserves a proper feature, all cylinders firing and all six wheels turning.

So, what have I learnt? Things don’t always pan out, and that’s OK. You have to walk away with the experience, a few good photos, and try again next time. If anything, I hope this has provided a window into the somewhat unglamorous side of being a Speedhunters photographer.

Enjoyed the behind-the-scenes look at putting together the incredible features on this site. Got to see that 6-wheeler running some day! Will we ever have shops like those visited in the US??

Hopefully it will be on a racetrack for November!

I’m glad you enjoyed my misfortune

Haha. Don't say that. You will make me sound like I'm sadistic.

Great points Toby. I would agree that asking owners or companies if they'd like their car(s) to be featured is an arduous task. But when they do agree, it's a really satisfying experience.

Much like how one day I decided to ask around to shoot a car that when I wrote about, it blew up the internet, especially the rallying community.

I thought someone might spot that!
I dare say it’s a custom chop. Pretty cool though!

Great write-up. That Tyrell is so cool! Before AutoCad and computers...That grey, Porsche Carrera is nice. Can we get more info on it?

What would you like to know? It’s pretty standard mechanically speaking, but the body work is hand rolled aluminium.

That's not even the cool P34, either.

The first design was much more dramatic. 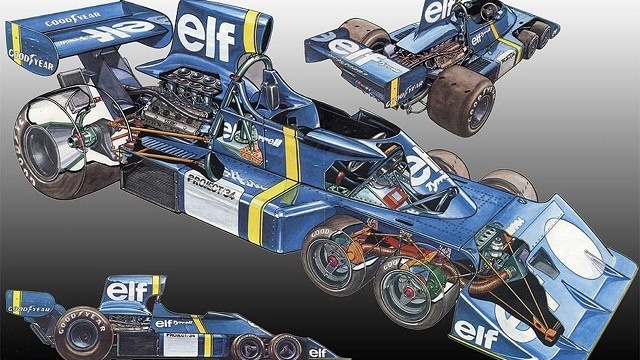 Love that gold e30,what a beautiful car it is!

I agree, unfortunately it has no registration or else we would have taken it out for a drive too!

Nice to be able to read about the process that goes into creating the content. The 911 proving that RS Watanabes look great on just about anything.

My sincere thanks for all your good work and articles in Speedhunter, Toby.
I enjoyed very much your photos, and enjoyed even more your forthrightness of words.

That’s very kind of you to say, very much appreciated thanks!

Hopefully the new owner is game for a feature

Car always deliver drama no matter what side of the lens you’re on. A different and great article

Never expected to see the Tyrell on Speedhunters
Is it the best F1 racing car? No but is it one of the greatest and coolest ever made? Definitely as it was the only F1 car with 6 wheels
Would love to see this thing driving down the road someday

It probably won’t ever be road legal but we’ll get it on a racetrack for sure.

That still would be pretty cool

Great story and photos. Waiting to see (and hear) that P34 in motion. Is it possible for you to visit Flex workshop/showroom? They have some crazy all terrain vehicles and parts

nice to see that the rest of my text vanished lol

Very interesting story, it gives us a different point of view and how things could go wrong and not everything goes as planned I hope one day you can manage to get in touch with the new GC8 owner and make a feature of it, keep the good work man!