I’ve been closely following the Russian Drift Series (RDS) ever since Dmitriy Dobrovolskiy took control in 2016. In the following years, this championship has gone from strength to strength, thanks mainly to forward thinking on Dmitriy’s part. Now, it’s consistently attracting some of the world’s best drifters.

For this reason, every serious team competes with three drivers. The stakes are high, so drawing international drivers in has become the norm, and this in turn has really helped raise the RDS’s profile .

Dmitriy is responsible for Team Aimol, and their driver line-up for the 2021 RDS season which kicked off at Moscow Raceway last weekend is crazy. James Deane, Daigo Saito and Charles Ng are three individuals that definitely don’t need any introductions.

James, who built a dedicated Nissan S14 in nine weeks, got a couple of his dreams ticked off in Moscow: He finally battled Daigo Saito and won, then went up against Russia’s best, Georgy ‘Gocha’ Chivchyan, albeit with a less successful result.

Gocha himself brought some new firepower, saying goodbye to his beloved four-cylinder SR20DET setup in favor of a bigger and more powerful Toyota 2JZ package.

Team Fresh Auto, who finished fourth in the 2020 RDS season, switched up their international driver too. Last year it was Tetsuya Hibino, but this year the team are going into battle with Ireland’s Jack Shanahan. That makes two Irishmen on the grid.

Three more drivers round out the international contingent. Kristaps Blušs from Latvia is competing with the Carville Racing Team; 2020 RDS champion Alexei Golovnya is defending his title with Lukoil Racing; and Sergei Sak from Belarus has created his own team, BY Motorsport.

All told, the Russian Drift Series has 44 drivers on the list this year, so even just making the Top 32 grid is a challenge.

To be honest, I was betting on James Deane for the first round win. I thought he would dominate right out of the gate, just as he did in Formula Drift. But that wasn’t the case. Whether it was track knowledge or national pride – or perhaps a combination of the two – the local Russian drivers were on fire.

James’ road to the win was thwarted by Evgeniy Losev in the semi-final, leading to a 3rd/4th place run-off against Gocha, who denied the Irishman a place on the podium.

Earlier in the event, Jack Shanahan lost against Arkadiy Tsaregradtsev in an OMT battle during the Top 8. Arkadiy, another drifting superpower from Siberia, went on to claim the first round with an outstanding drive, which I’m sure he will be very happy about after a challenging 2020 season.

Last year he was given the unfortunate nickname ‘Mr. Saturday’ after qualifying first at four out of six events, but not capitalizing on the advantage during the Sunday battles, usually due to technical problems with his then new Nissan 370Z. If all his car issues are now sorted, Arkadiy will surely be a championship contender this year.

One of the things the Russian Drift Series is best known for is innovation. On top of the teams championship, their Drift Dynamics system, which measures speed, angle and other parameters, is a helpful tool for the judges, and plays a big role when it comes down to tricky decision making. It will be interesting to see if Formula Drift and the Drift Masters European Championship adopt similar thinking for their competitions.

What was clearly visible for the second year, is that the European drivers really enjoy drifting on a fast and flowing track, as compared to the often slow, narrow street-style layouts they’re more used too.

Hopefully the borders will be opened soon, and I’ll be able to experience the 2021 Russian Drift Series in person, rather than by online pay-per-view (although that was impressive in itself). In the meantime, we’d like to send out a big thanks to Russian superstar photographer Evgeny ‘AirJek’ Murugin for these images. 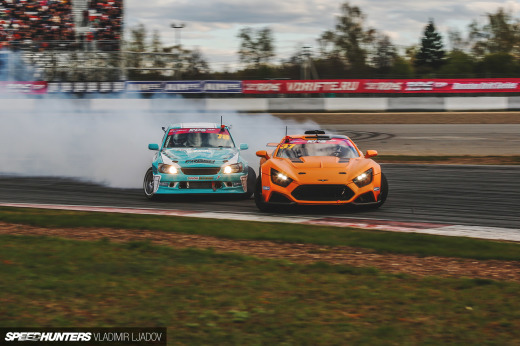 Congratulations to everyone on the start of the super season! Rooting for Arkady and Dean!

Arkasha is in top form, that's for sure!

What's the poor person with the rainbow pride parachute - target practice? Also, how do they give the cars their steroids?

Russia really needs to get with the rest of the supposed civilized world, before we entertain propaganda.

You are SO racist. Just because it's Russia doesn't mean that it's Mad Max. Before you post something, know your audience. Speedhunters attracts people from all over the world. And HOW is this propaganda? Just because the author is Russian doesn't mean it's propaganda. They're just sharing their love of drifting. I don't think I've seen a more racist comment, EVER. I hope you get your facts right one day, before you really offend someone.

You are SO racist. Just because it's Russia doesn't mean that it's Mad Max. Before you post something, know your audience. Speedhunters attracts people from all over the world. And HOW is this propaganda? Just because the author is Russian doesn't mean it's propaganda. They're just sharing their love of drifting. I don't think I've seen a more racist comment, EVER. I hope you get your facts right one day before you really offend someone.

this is a car-related discussion section. Please, let it remain so

Sorry, but I think you have been too influenced by the media. And well-known honest and truthful political media do not exist, even in the most "democratic" countries.

Gonna be rooting for Dean (like always) this season, especially with that new livery!

He will be getting better as soon as he gets familiar with the style of how Russian drivers drift.

James humiliated 3/4 of the RDS participants simply by building his car on time.
Then he met with "Losev's Line".