The BMW E30 holds a special place in my heart. My father owned a 320i sedan for almost 20 years, and it was in that car that I learned to drive. It also grew my love for four-door E30s, which I think look more visually balanced than the more popular coupe version.

Building a tough E30 sedan has always been in the back of my mind, so seeing Edgar Gumilev’s ‘BMW 330i’ for the first time got me excited.

This is one of the cleanest 3 Series I’ve ever laid eyes on, and I could never have imagined that BMW Individual’s ‘Atlantis Blue Metallic’ paint could look so good in real life – especially on a bright, sunny day in Latvia. Nacre color stripe graphics run down both sides of the car for another unique touch, and the entire look is completed with smoked front lights.

This is all on top of original IS side skirts, an Alpina BMW front lip, and rolled fenders. The exterior look is a winner for sure, especially in a world full of copy-pasted wide-body E30s.

The engine bay is absolutely pristine; every wiring harness and reservoir is hidden and anything deemed unnecessary was removed altogether. If you’re paying attention, you’ll also see that Edgar didn’t even need to open the bonnet in order for me to see what’s going on in the bay – only a third of the hood now remains.

The original engine in the car was a weird one. It was an M20B27 from a 325e model, which we didn’t get many of in Europe as they were primarily designed for the US market. While the engine came from the M20 family and actually had more displacement than the M20B25 – 2.7L versus 2.5L – it had a lot less horsepower – 121hp versus 167hp. The engine’s fuel-efficiency-over-performance design didn’t stop Edgar beating on it until it died, and when that happened the project really started.

Once the engine and transmission swap was complete, Edgar set about refining the exterior image. He started with a BC Racing coilovers to sit the body closer to the ground, and then fitted a set of custom Artec S1 wheels. However, those have since given way to the wheels you see here – three-piece OZ Futuras in a 17×8.5-inch front and 17×10.5-inch rear fitment. The wheels features 2.5-inch and 3-inch Radinox lips front and rear respectively.

If I was to modify any ’80s cars, I’d definitely be taking a page out of Edgar’s book. To me, what he’s done here is perfect.

Finding aftermarket seats to fit in an E30 is easy, but just try getting your hands on a mint pair of Recaro Orthopeds with fully functional electrics. These were the go-to for Alpina in the ’80s and ’90s, so they fit in incredibly well here. Edgar also swapped out the original steering wheel for a wooden Raid three-spoke unit, but that’s about it. These subtle changes have had a big impact on the overall feel inside the car.

Given its low stance, I’m sure there’ll be some who will question the functionality of Edgar’s ‘330i’, but seeing how he’s used it for a number of years now, I think it’s safe to say that he knew what he was doing. In my opinion, this elderly E30 is in very good hands. 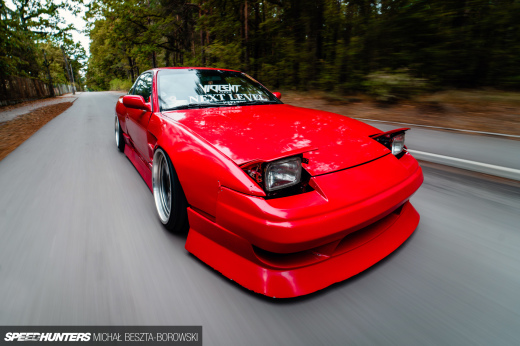 A couple more are coming

One of the best nice nip and tuck job in the engine bay. The engine looks so delicious.

Cool car, great write up, however please fix the spelling of Latvia, so people know how it’s supposed to be “…especially on a bright, sunny day in Lativa.”

Oh, thanks for pointing it out. Fixed!

I can't get on board with the wheels but everything else is very well done. Have to ask... Are those seats on the wrong sides?

That stripe on the side, damn... Love this build:)

nice coverage of story. need to know more culture of car in this region indeed. cheers!

I've had photos of this car saved on my instagram for months and am SO happy to finally know what the colour is!!!

As the owner of a 4-door 320i in gletscherblau I find this build so so inspiring and I love every aspect of it!! Great work and what a beautiful car