SHARE Ishikawa Body Are Doing What With A Nissan Vanette?

There I was again, standing on a little railway platform in rural Japan, waiting for a single-carriage train to take me further into the hills of Shizuoka. Hidden away in the workshop of Ishikawa Body are a couple of projects well worth the trek.

To get to the workshop meant taking the Tenryū Hamanako Line, a diesel-powered heritage railroad traversing 67km through picturesque countryside. If you’re interested in Japan, you’ve probably seen pictures of this line in travel magazines or blogs, and it’s even made appearances in Japanese film and TV shows. People are always going on about finding ‘real Japan’ and how there’s not much tangible evidence left of Japan’s rich history. These people are undoubtedly tourists who haven’t traveled outside major cities, because this train line hasn’t changed much since it opened in 1935.

The little train rambled through forests, skirted past Lake Hamana, through a tunnel, and entered orange-growing country until I reached an unstaffed timber station which reminded me of the Australian outback. While the train ride was all very nostalgic and lovely, what I had really come to see was Ishikawa Body’s soon-to-be-SR20DET-swapped C22 Nissan Vanette Largo.

Ishikawa Body is owned and operated by Masaru Ishikawa. The company primarily repairs and services everyday cars for the local community, but has made a name for itself building outrageous creations at every available spare moment.

As is protocol in Japan, before I started shooting the Vanette, Ishikawa-san talked through the shoot schedule at length, planning a timeline with military precision. Yep, it’s true, Japanese people love to be organised.

First up on the schedule was a tour of the shop and yard. There’s a nice collection of unique and unusual cars here, all selected as potential custom projects. You may notice a few Silvias in the mix too, and there are two very good reasons for that.

This GX70 Toyota Mark II wagon already has chopped arches, so you can probably imagine where that’s leading…

Built just 40km away back in 1976, this Suzuki Carry Wide is ripe for resurrection. It came with a two-stroke engine, so I wonder what Ishikawa-san would swap in to replace it? Through the abundant surface rust, the original green paint hints at just how funky this dinky little van would have been. Can you imagine it sitting on some tiny SSR mesh wheels and perhaps with a custom orange leather interior?

The Carry is still in production today, having made its mark across the world as taxis in Iran, songthaew in Thailand, and custom-built taxis in Indonesia where they’re nicknamed ‘Turungtung’ because of the sound the two-stroke engine makes. In fact, the ’79 to ’85 model Carry is still assembled in Pakistan and is used widely as an ambulance. The first generation Carry was designed by none other than Giorgetto Giugiaro of Italdesign, and while his vision was considered a bit wild for Japanese tastes at the time, the general silhouette has been kept.

I’m sure you’re all familiar with the Honda Beat; that bashful Honda red paintwork and those rather natty (or naff?) zebra print seats which came stock are unmistakable. I can only imagine what’s in store for this 0ne – a wide-body and turbo, perhaps? My trousers are getting tight, so let’s move on…

Sporting period decals is this S14 that’s seen better days. For some reason, on these wheels and in this colour with a red stripe, it reminds me of a VN Holden Commodore.

As I headed down to the workshop, there was one more curious old unicorn waiting for a makeover. With its Yokohama Advan AVS wheels and pin-stripe racing decals, this Toyota Deliboy looks like it might suit a painter/decorator from South London. It reminds me so much of Del Boy from Only Fools and Horses, that I can’t help but think “this time next year we’ll be millionaires!”

From Largo To Presto

So, we know that Ishikawa-san can build special machines, which is why, when I saw him start to chop up this Vanette, I knew I needed to stop by and witness the wizardry. On this particular day, Makiko was welding up some diff supports. He’s a good friend of Ishikawa-san, who calls him in when there’s something tricky to figure out.

The Nissan Vanette Largo first hit the Japanese market in 1979 and it was built in Yokosuka, just 15km from where I live. The first generation actually shared the engine and driveline with the sporty Sunny coupe – specifically the B210 and B310. So, you could say, the Largo van was destined to have an SR20 swap at some point in its life.

The first generation made a whopping 75PS and had swivelling captain’s chairs and sunroofs – the first to do so in Japan. Fast forward to 1992 and you could get your hands on an SGL Excel model with colour-coded bumpers, central locking, cooler box in the centre console, and best of all, a panorama glass roof.

It was designed to take the kids to school, go camping on the weekend (4WD spec was available), or even pick up work groups from the airport and shuttle them back to their hotel in modest comfort. It was never really designed to be slammed on air suspension and BBS wheels. But that’s what makes this project fun – and labour intensive.

To get the Vanette sitting so low requires the whole rear end to be re-engineered. New suspension mounts and diff supports are being fabricated from scratch, and considering this is likely to be the only one of its kind, there’s nothing to reference when it comes to measurements and angles.

Adding to the actual lowness, Ishikawa-san has also fabricated these custom shrouded wheel arches to partially conceal the rear wheels like a prude Victorian lady. The wheelbase has been extended back to accommodate the new driveline, so those arches have been completely rebuilt.

Speaking of wheels, Ishikawa-san definitely has a thing for – or a problem with – period-correct, rare and custom-built wheels. He’s even re-lipped some original Silvia S13 K’s factory wheels, stepping them up from 15-inch to 18-inch. During the process, he tried all kinds of combinations and fitments, but you’ll have to wait and see what he decided on.

Ishikawa Body haven’t started on the Vanette’s front end yet, but I can show you what’s going in there. This SR20DET from a donor Silvia will replace the stock CA20ET, and will be paired with an upgraded turbo and 6-speed transmission and differential from an S15. Stopping duties have been assigned to a Brembo parts-bin package.

You’d be forgiven for thinking Ishikawa-san is building the C22 to enter some kind of niche Japanese van racing championship we’ve yet to hear about, but when I asked him the reason he said simply: “I just wanted to build a family car that’s fun to drive.” With around three times as much power from a stock SR20DET, don’t let the kids eat ice cream in the back.

I’ll be back to see how that goes, and also to shoot a couple of other Ishikawa Body projects also currently under the knife. In the meantime, stay tuned for the 180SX… 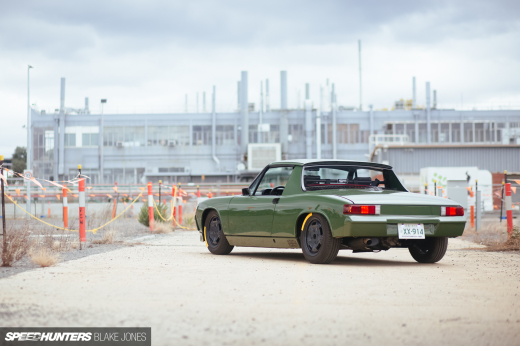 I've been obsessed with Japanese vans for the last two days and been trying to figure out how to get a $150 kei van without spending $2-3k on all the fees, shipping and making it legal in Poland. Now you're showing me this... I guess I just have to move.

moving to Japan is one way of saving shipping fees!

Loved the VN/S14 comparison, and LS swapping the Crown would really piss off some purists! Really enjoyed the story.

haha, That was never my intention?
cheers!

I just love his style and approach to his builds. Thanks for the great article.

can't wait to see it finished! glad you liked it

Tremendously entertaining article, and photos. The train ride, the tools, the slide hammers! Good lord, the wall of slide hammers! I always enjoy seeing builds in progress, especially when custom fab work is involved, can’t wait to for the 180sx article...

Cool build. Love to hear more about the technical side. That over-axle-arch made from rectangular tube is constructed slightly differently than I have seen before, with the top being one continuous pce.
Definitely want to say I am in for the other two builds getting focused on. I'd make them a very high priority to get articles finalized and up loaded!

The VN Commo on terrible Bob Jane rims and cut springs! I see the it haha!

you dug out one gem of a project. This is very interesting and I can't wait to see it finished.
Keep the great content coming, mate!

PS: love the train story, too.