SHARE 9-Seconds On The Strip, But Still Keeping It Street

In clock-battling motorsport disciplines like drag racing and time attack, it’s easy for builds to spiral out of control. You know how it goes… cars are initially entered in street classes, often more for fun than anything else, but over a while – whether than be measured in years or a single off-season – they evolve into very different machines capable of much faster time slips. It’s understandable too, because who doesn’t want to go faster?

Sweden’s Stefan Abelsson knows all about it. But his 1994 Acura Integra wasn’t even supposed to be a race car – when he bought it, he was looking for a daily.

In 2007, Stefan owned an EG6 Honda Civic VTi. Keen to go drag racing, he decided to get serious with the B16A-powered hatchback, which would involve taking it off the road – which necessitated the purchase of another car. While searching the classifieds, Stefan spotted the base-model Integra for sale at a price he couldn’t pass up. It was so cheap in fact, that the notion of using it as an everyday car immediately went out the window. It was the perfect race base.

“The Integra was completely stock when I bought it, and my initial plan was not to buy new parts or rebuild it. My plan was to fully focus on the drag Civic build,” explains Stefan.

But after a little time with the Integra, Stefan’s curiosity won out. He wondered how it would fare as a track car, so duly fitted coilover suspension and R-tires. “Before I even tried it on the track for the first time, I thought to myself, if this is fun, I will get stuck in and start to rebuild the Integra as well,” he says.

As you can see now, Stefan didn’t need to convince himself twice. But you might be wondering why you’re looking at a drag-spec Integra and not circuit-spec one…

To cut a long story shot, the Civic drag build was eventually abandoned after a business and sponsor heavily involved in the project went bankrupt. That left the Integra, which Stefan continued to build up into a formidable track weapon over the course of the next couple of years. Ultimately though, the drag strip beckoned, and after a few runs at a local test ‘n tune event to “see what she was capable of,” the car’s future as a quarter-mile destroyer was decided.

In the drag racing world, a traditional D or B-series Honda engine build would only get Stefan so far. To generate the sort of power he craved without having to resort to extreme engineering measures, he needed another solution. “I took a lot of inspiration from America, so a Honda K-series engine was the obvious choice,” says Stefan. “If you combine a K20A cylinder head with a K24A bottom end, you get a real torque monster engine, and with only having used original parts from Honda.”

The other good thing about swapping a K-series engine into a DC Integra chassis is the ease of it. Every part to complete the conversion is readily available, making it a bolt-in affair.

“The Honda K24 can also withstand a lot of power without having to touch the internal parts, and with E85 fuel [and a suitable form of forced induction] you can reach 500hp,” says Stefan, adding “if you want more power, connecting rods and valve springs are the next step.”

Getting the power to the ground is K-series gearbox running a Graf 4-speed gear set, plus a Tilton twin-plate clutch, Wavetrac differential, and 1,000hp-rated driveshafts. We can’t forget – or miss – the 13×11-inch Weld Racing Magnum Import Drag wheels with Mickey Thompson 24.5/9.5-13 slicks up front either.

Impressively, all of the work that went into building the Integra – except the engine machining and roll cage – is Stefan’s own. “Much of my knowledge is self-learned,” he says. “It began when I was around 15. I had a moped that I wanted to make faster, so I started to tune and rebuild it. As I’ve gotten older, most of my knowledge has come from reading and seeing other car builds in magazines and on internet forums. I work in a large industrial bakery, so when I spend time in the garage after work there’s a big contrast.”

One of the coolest aspects of this build is Stefan’s determination to keep it street legal. No, it’s not his only car – he eventually did require another daily – but the Integra does see plenty of road use, and has been inspected and re-registered in Sweden as a converted vehicle. “As time goes on, the car is becoming less track-focused and more drag-focused, but I will never turn this car into a pure drag car,” Stefan says. “I want to keep being able to drive the car legally on public roads, and also want to keep the look as original as possible, with some small refinements like carbon fibre details. I like the ‘sleeper’ feeling.”

As for future performance upgrades, Stefan has a clear direction of what he wants from Integra and what it will take him to achieve his goals. The car’s best quarter-mile pass to date is a 9.94-second ET at 236kmh (146mph), set at Kjula Dragway in Eskilstuna last summer, but Stefan hopes to soon have the chassis certified for 8.5-second ETs. “This current engine is estimated to be delivering between 750whp and 800whp on 2.0bar (29.4psi) of boost [it has been dyno-tuned to 720whp on 1.8bar (26.5psi)], but it will soon be replaced with a new engine built to deliver well over 1,000whp and the ability to rev all way to 10,000rpm,” he says.

With a dedicated drag/street car capable of seriously quick single-digit ETs in garage, you bet Stefan is happy with the outcome of his once daily-destined Integra. And since then, he’s even addressed the circuit race-shaped hole in his life too. “I am now sharing and building an endurance race car together with some friends under the 0510racing name. We have an H22A-swapped ’98 Honda Accord that we took from completely stock to a very competitive race car in our class in under a year. With 263whp and 977kg, it’s incredibly fun to drive.”

Stefan Thanks: “My family and friends who have supported me over the years.”

Wow- that is a *serious* sleeper.

Crazy how you can have a drag build as a daily

The home garage guy is getting close to being able to build those exotic group c, lmp, jgtc type motors from the late 70's - 90's at home.
my question is how tractable are these big turbo, high rev, 4 cyl motors? are they useful on road courses? is the lag problem being solved? not just with anti lag? genuinely curious.

He tuned a MOPED!? That's sick! BTW that's a sick build and i can imagine the look on peoples faces when they get smoked are the red light:)

Yeah pretty comon in the Netherlands at least. I had a scooter when i was 16-19 (Benelli 491), and i had changed about anything i could on the engine. Made around 15hp. Was lost of fun then.

But what can you do? do they put an exhaust on it?

Could be a mix of things really. Slight engine mods to looks. I did not grow up with mopeds so I have little information regarding that.

Hmmm, I need to look into that:)

In some countries, there is quite a big market for moped/scooters etc.
Here in the netherlands, I had a yamaha TZR, which is a 6 speed 50cc bike. If you removed the limiter in the exhaust and did some small tweak to the ECU. (Drill a hole through the 'O' of the manufacturer text, it was that easy lol), you could run a decent 95kmh.
That was my daily driver for some years, always flat out to school.

That yamaha bike shares the same AM6 engine with other manufacturers, so I guess that made it quite interesting for companies to make parts for. 80cc would be a popular choice, but obviously not street legal. 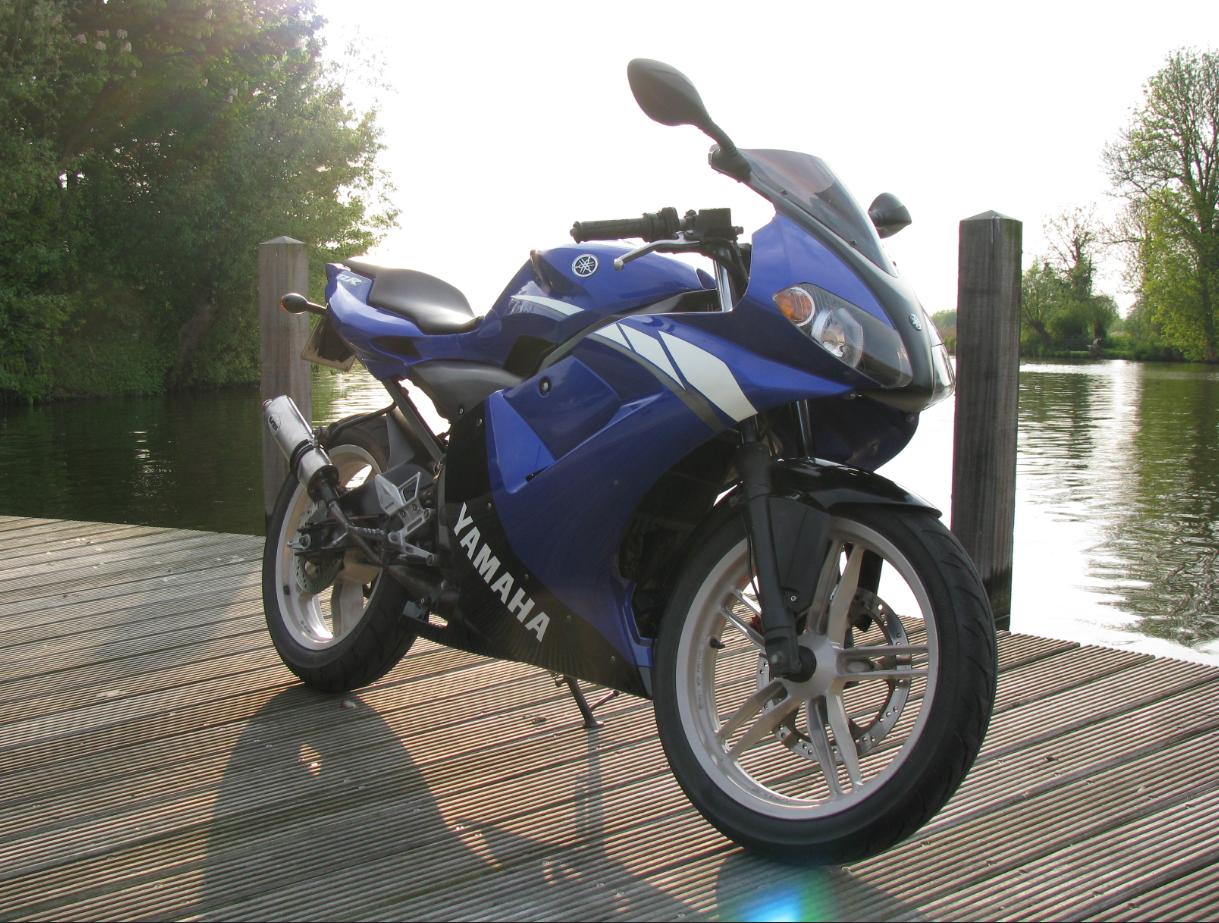 oh wow, damn that's so cool! it's incredible how people will always find a way to go fast in style and have fun!

Hello Speedhunters producers and editors. You folks have done a good job so far attracting readers from all corners of the world. However... as the name implies speed.... what I find lacking is that you hardly ever feature article about motorcycle. Come on.. motogp season will start this weekend and that is the most exciting motorsports on the planet to many. Approximately 280 rear wheel horsepower (KTM quoted 270 WHP, Ducati.. well considerably more) in a bike weighing 157 kg (347 lbs). Please take my suggestion and begin featuring bike, not just cars.

Cool car this! How I envy him, that he can just register this car as a 'converted' vehicle and still drive on the street with a rollcage etc. without worrying about the police (unlexx exceeding the speed limit). In Poland it's not that good sadly

Read following report to learn how a single mom was able to make $89,844/year in her spare time on her computer without selling anything..