After 10 years of Speedhunting thus far, you might be surprised to learn that one of my fondest memories is a wall.

Not a wall at Indianapolis, or Ebisu or Circuit Gilles Villeneuve, but a regular boundary wall between two properties. It’s not painted and there’s even evidence of moss growing on it, but I think of this wall an awful lot. Even eight or nine years later, the thought of this wall still makes me smile.

I need to rewind back to 2012, when I was asked by Simon at Classic Ford to venture into the Irish wilderness (AKA anywhere outside of Dublin) to shoot a modified Ford Cortina. This would have been pre-postcodes and pre-CarPlay, so my directions took me to an approximate area, where I then had to try and figure out exactly where to go.

Thankfully, the gleaming white Ford Cortina with large race numbers emblazoned upon its paintwork parked on Barn Levy’s driveway proved enough of a clue that even this idiot couldn’t miss.

After polite introductions, we headed to a place nearby that Barn though would work quite well (it did).

Following a celebratory burnout to finish the shoot, we returned to his house to talk more about the car and to take a look at another project Barn was working on. I had wrongly assumed that the cars were kept elsewhere, because I knew he wasn’t working on the cars in his driveway.

Beside his house was a small lane which I would eyeball as being approximately one Ford Cortina width wide, plus a hair either side for safety. It was tight enough that anything designed after 1970 wasn’t making its way through here without becoming a permanent fixture.

Barn must have noticed my confusion as I tried to Beautiful Mind my way through just how this was going to fit, and pointed out that he had notched one of the concrete support pillars to allow the car to fit down the side of the house a little bit easier. It wasn’t butchered or hacked out, but done with a level of care and consideration that some people don’t even apply to their actual cars.

The lane doesn’t get any wider, which is why Barn had to modify his rain gutters with a quick release system to move them out of the way when moving the car in or out. Mario recently wrote about how small side mirrors will ruin your life, but I think Barn presented a solid case here for running no side mirrors at all.

With the car safely backed in, Barn revealed his other project: a big-tyre Ford Pop drag car powered by a 468ci Oldsmobile V8. The drag slicks were what ultimately necessitated the wall notch, and if it was tight with the Cortina, I can’t even think what the Pop must look like squeezing out of that laneway.

The Cortina itself? A ground-up build, sub-800kg (1,763lb) with a SOHC Mitsubishi Lancer engine boosted by a Garrett T3 to produce 250hp. A car built to be driven and exploited at every opportunity.

As much as I enjoyed shooting the car and talking to Barn, it’s still that wall that I most often recall. Sure, it’s not digging a Lamborghini out of a basement, but it is another example that perfectly demonstrates how car enthusiasts will always overcome a problem.

If You’d Gone Down To The Woods This Year

That kind of power to weight in that car would be enough to satisfy even the best of drivers. Beautiful attention to detail and finish make this a very desirable car for me. Nice photos and feature. Went great with my morning coffee and a foot of snow outside.. thx Paddy

I wouldn't have been enthusiastic to read a story about a Lamborghini in a basement, I would have waited.

Thanks Paddy , the walls still there scratch free and Pop up and running and running 9.1 in the 1/4 mile all na , keep snapping 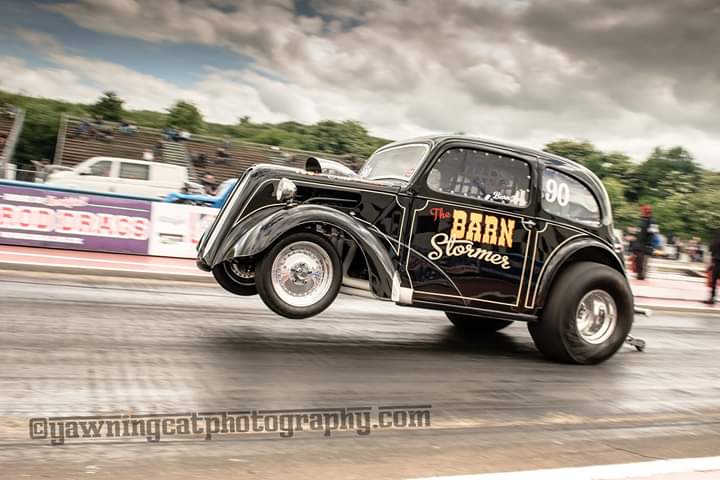 What a car, though.

Haha this is so badass. I love the fact it's boosted. Drove a car a while back making 440whp and 1700lbs. Pretty fun to be light!

Judging by the appearance, does the owner competes in the Goodwood Road and Racing type of stuff?

Along with being a manual car nowadays!

Not even a semicircle of foam pipe insulation to avoid chipping... a ballsy 10/10.