You’ve lived in the city outskirts your whole life; maybe you’re a bit bored, but have a passion for speed. What do you do? If you’re Joosep Järv from Estonia, you build yourself a badass Volkswagen Beetle drag machine.

Joosep’s inspiration for this build came about after seeing Finnish drag racer Jussi Nurmi blast 10-second quarter-mile passes in his naturally aspirated Type 1. After this, the idea of building a fast VW wouldn’t leave Joosep’s mind, so around a decade ago he bought himself an bare Beetle shell and went to work.

Initially, Joosep used a stock 1,585cc VW motor fitted with an old turbo from a diesel BMW 3 Series. With this power-plant, his Beetle ran 13-second passes on the strip – quick but not nearly quick enough.

Next, Joosep used an air-cooled 2.0L engine from a Transporter T3. With this setup, a pair of turbos taken from two BMW 525tds donor cars were used, but with the extra power came transmission breakages. At this point though, Joosep knew he was headed for quicker ETs.

Joosep could have stuck with the Transporter motor and upgraded the driveline to handle the extra power, but instead he opted for a whole new setup. He picked up an Audi 01E FWD gearbox, and because it’s a bolt-up solution for so many other Audi engines, attached it to a 4.2L V8 from an Audi A8 – the largest motor he could find for his limited budget.

The V8 required a serious amount of custom work to make it fit into the back of the Beetle, but ultimately Joosep made it work. Furthermore, he chopped the body and added a retro-looking split windshield.

Totally stock, the naturally aspirated ABZ engine pushed the Volkswagen to an 11.7-second ET on a slippy and cold concrete strip in October 2016. During the 2016/2017 winter, Joosep added some nitrous to the party, and when the car reemerged the following year he was finally able to claim a 10-second pass with a 10.9 ET.

But why stop there? Now that Joosep had tasted a little victory, he wanted more.

By now the car was lifting its front wheels at launch, so Joosep did what any self-respecting petrol-head would do – he named his team ‘WheelsUp Racing’ and added a turbocharger for more power.

As the car was now running 10s easily, all of a sudden it wasn’t meeting the safety regulations, so the Beetle was brought back into the garage, and a major overhaul that would help take the car into the single-digit ET zone began. Joosep designed his first tube-frame chassis – which weighed only 120kg (265lb) – and the Beetle body was stripped right down until there was only around 60kg (132lb) of metal left. With all components in place – including a lot of fiberglass – Joosep ran 9.0 at 242km/h.

Fast forward to the present day, and WheelsUp Racing are now working on refinements. Aero modifications like a rear wing and a front splitter have been added to aid stability; clutch problems were resolved with a fresh Quarter Master 3-disc unit and 7.5-inch flywheel; and turbo lag was remedied with SQS Racing straight-cut gears in the Audi transmission.

When I met Joosep and his team to shoot this feature, they were participating in one of Estonia’s last drag racing test days of the year. Here they fitted larger slicks out back, and Joosep ran a new personal best quarter-mile pass of 8.83 at 260.8km/h (and a 5.6 at 205km/h on the 1/8th mile)

All of this progress has only made Joosep want to go even faster. The 8-second pass sees him now move out of the ‘Super Comp’ class and into the ‘Outlaw’ class where top competitors run 7-second ETs.

Joosep says that he has a long list of upgrades in mind in order to be competitive. Spending more hours on the dyno this year than racing means that the team have a good understanding of where they are heading.

Right now the still-internally-stock ABZ engine is making 600kW and 1000Nm at the wheels, but this is being achieved with maxed-out boost, injectors, and fuel pumps, so all of them will get an upgrade for the 2021 season. Nitrous will also be added, and for stability, the body will be stretched a little longer.

I have no doubt that Joosep and the whole Wheelsup Racing crew will make a stellar job of this car over the winter, and when this Frankenstein of a Beetle reappears in spring, it’ll easily be one of the most exciting cars on the grid, and ready to go head-to-head with the quickest Estonian drag cars in its class. 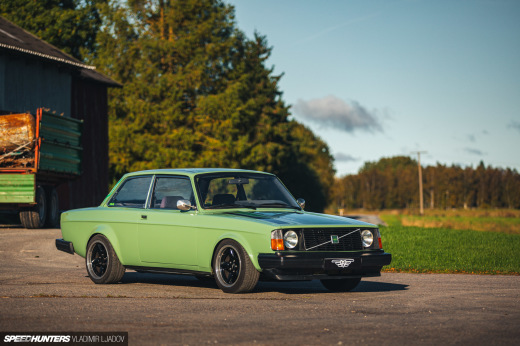 As an enthusiast of all things automotive, THIS makes you slow down while reading to really grasp of what this car has got to feel like?! So sick

frankenstein is the scientist, not the creature.

Please read it as "Frankenstein lives and he built this monster",

The best part of this article is "limited budget".
It reminds me of an old German VW Beetle that was smoking all its competitors, no similarities in between them (only similar base model) so don't ask how i can relate them in my head. Anyway I'll try to add the link:
https://www.youtube.com/watch?v=Mmv52wg6lZw