Have you ever had someone draw you at the carnival?

You sit there for what feels like a year, hand over half your life savings and at the end receive a huge portrait of yourself to carry around with you. Not a true likeness, but an exaggerated vision that makes you hate your own features and want to crawl under a rock.

Souki’s Nissan Leopard is a caricature on wheels, not only because of how exaggerated it is but also because of the impression it makes once you’ve seen it.

This is a car that sears your eyeballs with its presence, burning an image of itself into your deepest subconscious.

That being said, unlike those hand-drawn caricatures, Souki’s Leopard leaves a very positive lasting impression. I’d go so far as to call it refreshing, as well as batshit crazy. What else would you expect from its owner?

Being an EDM/hardstyle DJ and producer, Souki isn’t your typical shakotan man – if there even is such a thing. Seeing as his other notable car is a bright orange wide-body Lamborghini Diablo, it’s safe to say his style is a little… out there.

As far as shakotan cars go, Souki’s is notably different. Yes it’s wild, but there’s a certain richness to the Nissan that most similarly styled cars are lacking. The paintwork seems to be a cut above most builds, thanks to the influence of US style.

In his teenage years, Souki was fascinated by lowrider culture in the USA, so much so that he visited LA as many times as he could just to soak it all up. His first car was a 1979 Cadillac Coupe DeVille, and he even imported a Chevy Impala to Japan.

He’s never been one to leave them standard though. Even the Cadillac didn’t escape modification, and by the time it left Souki’s ownership it was decked out with a mural and sitting on his own custom hydraulics. Ten Impalas and countless show awards later, he’s put his touch on cars from all over the world.

Obviously there’s a bit of a leap between lowrider and kaido racers, but after a childhood obsessing over scale models and wide-body zokusha cars, it was inevitable that the worlds would collide.

Souki’s issue with traditional shakotan cars is that the build quality leaves a lot to be desired. Most are only built to last until the shaken expires, at which point they’re sent off to be scrapped or kept off the road. What’s the point of putting in time and effort into something with such a short lifespan?

This Leopard sets out to buck the trend and prove that it’s worth putting in the effort. I agree, and even in the photos you can see how much thought has been but into the details. The panel gaps are almost all consistent and the paintwork is gleaming.

The BBS RS wheels are blinding, polished lips and hex nuts contrasting against the gold-plated faces and perimeter bolts.

I’d almost go as far as to say that these could be the nicest wheels ever to grace a kaido racer. Not because they’re BBS, but because of how well they suit the Leopard’s warm colour scheme. The wheels tuck when stationary thanks to air suspension, again almost unheard of on a shakotan-style machine.

My personal favourite touch is the positioning of the taillights. Instead of just adding on a wide-body, Souki has pushed the taillights out to the corners of the car. This gives the rear end a thought out look, almost as if it could have come like that from factory. Almost.

It’s hugely impressive considering almost all the bodywork was done by Souki himself. When he first started modifying cars he never had the money to get work done professionally, so he leaned how to do it all himself with his mates. Engine work, chassis, paint, you name it.

Even the interior has been subject to a few choice touches unlike most zokusha builds. An extended leather dashboard adds a touch of class to what would otherwise be a plastic-heavy cockpit, broken up only by the velour seats.

The warm woodgrain Michelotti steering wheel and matching gear knob do an excellent job of lifting the dark cabin, and suit the exterior colour theme down to a tee. Even small period correct items like the Carrozzeria parcel shelf speakers add more details to the expanse of grey ’80s Nissan fare.

It’s not all about the details though with a build like this – it’s designed for shock and awe on a grand scale. After all, you’re supposed to hear a shakotan car from miles away and see it from space. Laid out at the side of the busy main road with the ridiculous exhaust extensions slotted in place, the Leopard looks like it belongs in a copy of Cowboy Bebop just as much if not more so than in Shakotan Boogie.

It goes beyond alien, especially from a UK perspective where the closest we see to anything like this is a K11 Nissan Micra with itasha down the side and a 12-inch length of pipe replacing the rear silencer.

I can’t think of any car that looks as fast whilst stationary. Even rolling at 5mph it looks like its flying through hyperspace at light speed. The fins, the splitter, the flat spoiler at the back – they’re all inspired by the Skyline silhouette racers of the ’80s, and you can tell.

Unlike those beasts of old, Souki has no intentions of taking the Leopard on track. This really is a late-night city cruiser, breaking necks under the Tokyo street lights.

Not content with just one mental Nissan, Souki is now building another in the form of a Y30 Nissan Gloria. The bodywork appears to be even wilder and with even more thought than into the Leopard. I can’t wait to see it complete, and seeing as it’s a four door it’s fun for all the family, eh?

When asked about why he enjoys building kaido racers so much, Souki simply replied: “It’s fun to customise the car myself, express yourself and show it to everyone. Japan is very conservative, and this allows an escape.”

There really is no practical use or benefit to anything on these cars, but that’s part of what makes them so f**king cool. Souki’s is an example of building what you want just because you can.

According to the man himself, “Music, cars and party are my lifestyle.” Clearly he’s living his life to the fullest.

A Day In The Life Of A Kaido Racer

Im a teen from India who is so much into banging gears and squealing tyres and full throttle corner madness! I read forums on Speedhunters to know about different cars and cultures and being a Speedhunters Member has always been a dream for me as this includes the best of gearheads giving out the "wrenching on a Japanese engine" vibes! 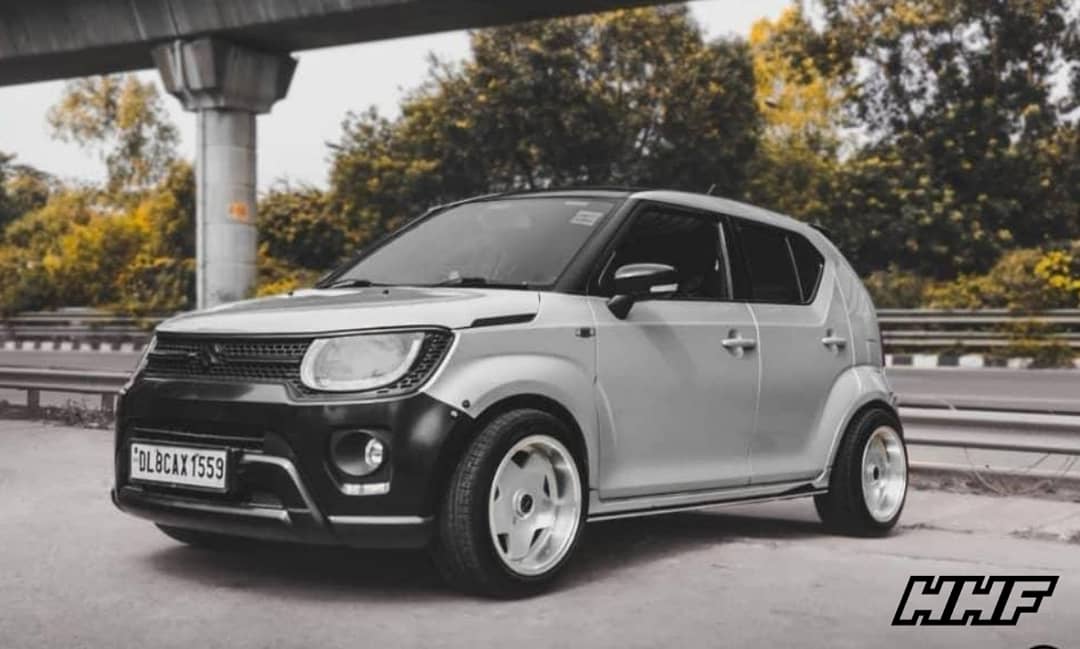 Did I miss out anything?

love the photos as always!

So great pictures. That taillights moved to corners is fantastic touch.
How it is possible to legally drive car with this crazy bodykit on streets in Japan? Or it is not legally but only without fear of cops?

That things is utterly ridiculous in all the right ways. I would never want to own or drive it, but I' d definitely be giving him 2 huge thumbs up if I ever passed it.
I'm also mildly jealous that their roads are good enough to drive that on city streets. I couldn't even get that out of my driveway without ripping the whole front end off. Even if I could, those front corners couldn't survive that long on the roads.

Love the editing, the color, the depth on ALL of these, and in general I'm impressed with Mr. Riccioni's work-- That vibrance shakes the pants! I'm curious about Souki's mixing, and if he's as exacting with that as he is with his bodywork. The reflections on the back of the trunk look perfectly straight.

OT, but we can probably thank him for bringing the Diablo back to relevance, and into the public awareness.

That thing is rad as hell. And you're right about the Lowrider influence - that paint job is almost identical to a CRX ("Orange Passion") featured in Lowrider Magazine in the 90s.

amazing pictures of a very interesting vehicle. How you capture speed at night is always stunning.
He built it for himself and it shows. Very clever move with the outboard taillights and lovely details.

I had a Tamiya 1:24 scale model kit of this generation Leopard on the shelf... and built an Australian-style ute conversion of it some years ago. Incidentally in a similar colour scheme. 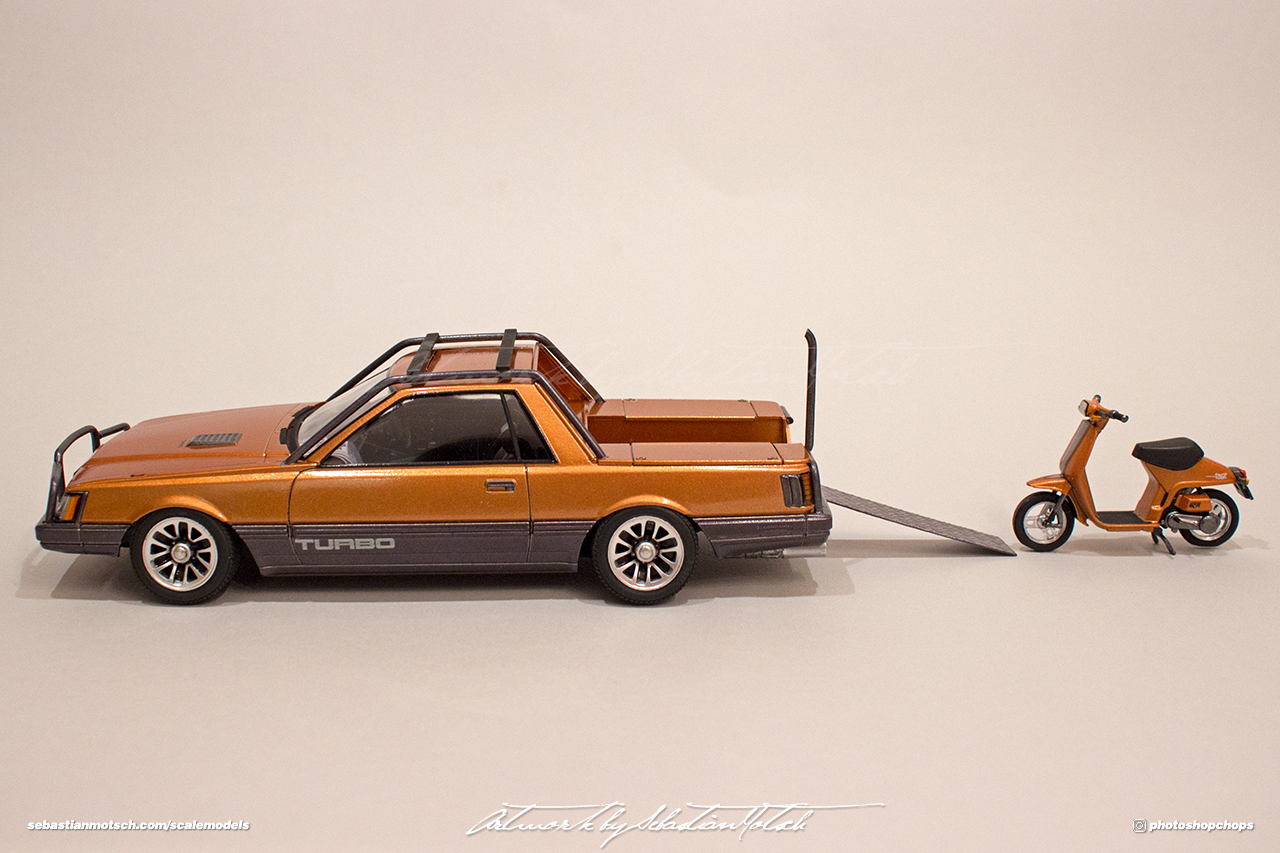 This thing looks like something out of an anime. I love it!

this is exceptionally, extraordinarily, ridiculously stupid and i think i'm in love with it

Damn it Mario :D, I'm going to be spending all day looking a Nissan Leopards now. I didn't really know about these and I really want one now (particularly an F31).

OMG! There's a wagon variant! No chance of any work today..

Associating the word racer with this car shows you how far the industry has slipped since the 90s.

I love these cars, but let’s not start shitting on the word “racer.” This is rice. Ricer as f***. It’s fun bc the owner knows he’s basically making a really nice shit box, but let’s keep the real people who drive hard and tune for a purpose out of this nomenclature. Thanks.

"Kaido" in japanese just means "street", so I guess you'd be right by calling them "ricer" which sometimes IS associated with street racers.

btw
zokusha - "gang car" with wide arches & crazy bodykits and tailpipes
shakotan - low down (a sub-style of zokusha which are more clean, just lowered more than allowed)
bosozoku - which used to mean motorcycle GANGS but now is kind of mixed with zokusha when comes to cars which includes everything like bikes, cars, even vans (although when out and about a group of bosozoku would actually include one or two cars or one van)

Kaido racer refers to the style customization more than anything, thats what the Japanese themselves call these 70s/80s silhouette racer inspired vehicles. Not sure why your getting offended over the word 'racer' lol. Hardcore tuners who build for pure speed and handling probably don't care about nomenclature but people get so hung up on being PC all the god damn time getting offended for others.

Why doesn't the name "Bōsōzoku" appear even once in this entire article?

Because Bosozoku is an improper term adapted by mostly westerners to refer to kaido racer's, bosozoku is a gang term not a car term

I love his cars. Souki-San. Fits the profile that so many car owners miss.

Be ass badass as your cars. You should look cool next to your car.

You shouldn’t look like you don’t belong in the shot.

It goes beyond so much to deliver the complete package, money, style, women, custom cars.
He is even a rockstar Dj.

I love it and I do the same.