During my last visit to BBi Autosport, I spotted something interesting tucked away in the corner. This didn’t really come as much of a surprise, as from BBi’s latest Pikes Peak build to a wild 993 RWB with pushrod suspension, just about every car in the shop is intriguing in one way or another.

What was different about this one is that it wasn’t quite a car – not yet at least. Instead, it’s a slightly terrifying looking space-frame chassis with a Rothsport Racing-built powerplant. ‘Terrifying’, I say, because I’m familiar with Jeff Gamroth’s prowess with this – and just about any other – Porsche mill. This particular 3.8-liter flat-six is from a 993 and is good for 380 horsepower through a close-ratio 5-speed G50 manual gearbox.

If that doesn’t prickle the hair on your neck, I suspect a ride-along might do a bit more than that. After all, it is a two-seater so rides are surely encouraged. But what is it exactly?

The more accurate question actually is: what will it be? We’ve all heard of, if not seen, a Porsche 550 RS Spyder, and this will be its modern interpretation by Greg Martin at IPD (Innovative Pro Design). With a buck being milled as we speak for production of both aluminum and carbon fiber bodywork, this one-off prototype will hopefully become the first of a limited production run of these roadsters.

I’ve already mentioned the air-cooled Rothsport powerplant, and if the name still doesn’t ring a bell, Jeff at Rothsport Racing is the one who puts together the Emory fours as well as the high-strung sixes for Guntherwerks. In other words, it’ll be very good.

This engine and the proper manual gearbox are paired with a mix of 996 and 997 braking and suspension bits, all held together by the aforementioned tube-frame chassis. It bears pointing out that there’s some tricky push-rod suspension componentry present, too.

The cockpit makes use of factory-issue VDO instrumentation ahead of a Momo Prototipo steering wheel, but is otherwise ‘under construction’. I get the feeling that the sky is the limit here, and anything from a similarly bare interior to a fully upholstered setup would work just fine depending on a purchaser’s individual tastes and requirements.

While we’re dreaming, how about a coupe version? This photo from the archives highlights one of the chief drawbacks of a Spyder, but on the dry Southern California roads around where this car is being built I don’t think it’ll be much of an issue. Still, so long as my inhumanly-long torso can fit under the roofline, I’ll almost always go for a hardtop.

For a sense of scale you can readily see the car is much smaller than the 993 above it, true to the original 550. So it clearly isn’t going to weigh much, either. All of this adds up to a car that will not only be incredible behind the wheel, but will also be a reasonable machine to own.

Need some brake pads? Parts are a click away. Can’t be bothered to change your own oil? Your local P-car specialist will have you sorted, and then some.

Seeing as how IPD shares the facility with BBi, there really is potential here for a proper run of these, all dialed in and buttoned up.

Projects like this can be rife with setbacks, but here’s to hoping my next visit down to Southern California procures an update. Better yet, can you even imagine what this thing would feel like at speed when finished? Well-sorted as it is sure to be, ‘terrifying’ might not quite do it justice. But bring it on, I say. 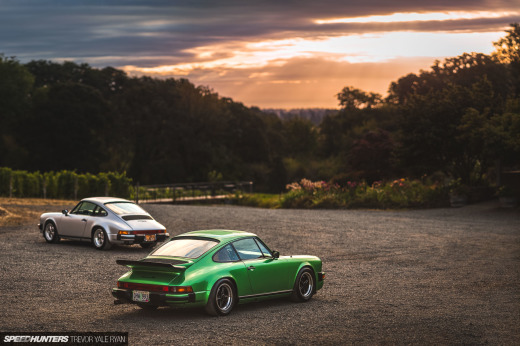 They should have built two of them, just so you can drive one with the shell off.

The idea is to build several more, so just order yours without the bodywork. Although if Porsche was offering them, the no-bodywork option would cost more.

Any plans to offer these to the public? Or a one-off project? That might have been addressed above and I missed it...sorry if that's the case.

Yup! "This one-off prototype will hopefully become the first of a limited production run of these roadsters."

Wait, so is it supposed to have a replica body (perhaps stretched to fit this chassis) or is it going to be their imagining of a 550S built in 2020?
Either way, cool as heck!

My understanding is that I'll basically look like the original Spyder, but with these modern underpinnings. I guess we'll see when the buck is done and the car is built!

I can only imagine.That build looks just like my go-kart.

Those dots look like tracking markers. Like maybe it is being used in a film as a base that will have a CG car body comped in later?

Those dots are almost surely for a 3D-scanner system to help design the buck for a body in the future.

This article reminded me of an early scene in Jurassic Park, when Grant turns his girl's head agape and gradually flops out of his jeep.
After reading and saving just about every picture, I was reminded of that Shining meme, where Jack is grinning and nodding with a thousand yard stare.

Yo this is sick!
Love the idea of a modern hot rod!

The 550 Spyder is my favorite vintage sports cars
Can't wait to see how this modern look will be like!

I live in a place with horrid public transport so can't directly relate, but I imagine job demands is a decent part of the requirement. Project car doesn't count as its not viable transportation, so I'm referring to need for daily.jobztip.com

Since i started with my online business i earn $90 every 15 minutes. it sounds unbelievable but you wont forgive yourself if you don't check it out.....

I'm with you on the coupe. That underneath an Outlaw 356 would be knockout.