Are there any ice hockey fans among us? If so, then the term ‘sucker’ pass is probably somewhat familiar. A sucker is a pass that puts the receiver in high risk of being checked off the puck, rather violently, upon receipt. The passer doesn’t intentionally wish harm toward the recipient of course; the pass simply becomes a sucker pass as a result of the play changing quickly in the opposing team’s favor.

When Kerion sent through a folder full of the various vehicles he shot during his recent trip to Ocean City, I couldn’t help but feel, at least slightly, that he sent me a sucker pass. At this point, some of you are confused, fed up, and even somewhat angry with our ‘not H2Oi 2020‘ coverage, so you might be wondering why Speedhunters continues to send anyone to Maryland for this ‘event’ at all.

The variety of vehicles tucked in the alleys of Ocean City in early October are hard to rival, practically anywhere. Despite what it may look like from the outside, and amidst all the tickets, walking bananas, misguided youth and pandering for Instagram likes, the H2Oi weekend can still be a place where like automotive minds are able to converge relatively unbothered.

So, if you can, put aside your situational bias and enjoy the first of many treasures Keiron dredged up on his latest trip to the city called Ocean.

How Cool Could That Be?

It’s a bit funny how many builds start from the simple thought: ‘How cool could that be?’. Chris Miller said that to a friend about a passing Nissan Hardbody truck shortly after he sent the motor of his Mazda 6 to an early grave.

In stock form the Nissan D21 Hardbody truck was right up there with the Mazda B2200 and Toyota Tacoma as a competitor to Ford’s Ranger and Chevrolet’s S-truck offerings. During the heyday of mini truckin’ it was an extremely popular platform to customize with small, wide wheels and a hefty drop.

But in 2020 we’re a long way removed from mini truckin’s peak, and about eight years from the last time a proper mini (single cab, short bed) truck was released in North America.

As I mentioned, a wide variety of slammed Hardbodies have been built across the globe, but a much smaller percentage have made their way onto the track. Fewer still have been properly built to go sideways.

Chris’s inspiration for his Hardbody came from an appreciation for the factory styling, coupled with the peer pressure of friends who found themselves getting further and further involved in drifting.

While not a traditional drifting platform, thinking of a Hardbody sliding through corners flanked by a pair of S-chassis had Chris wondering how cool it would be.

Making a truck work well as a drift/street vehicle isn’t a task for the faint of heart. A simple coil spring, shock and spindle swap, coupled with lowering blocks and de-arched leafs in the rear wouldn’t do the trick.

Chris can attest to this – he tried.

After attempting to live with the horrendous axle wrap that came with a traditional mini truck-style drop, he was forced to get creative. The rear suspension is now four-linked, using a universal kit originally designed for air bags.

The provisions for bags were cut off and replaced with coilover brackets, resulting in a true coilover setup for the rear. All of the aforementioned is now covered with a Rohde Fabrication bead-rolled notch cover.

To assist with vehicle balance, Chris has placed the new fuel cell considerably further rearward than the factory tank.

To match the rear, the front end was brought down on QA1 coilovers fitted with Swift springs. The steering knuckles have been shortened, and the lower control arms extended to allow for an overall suspension geometry that is better suited for drifting. Read: more angle.

Behind Work Meister wheels a Nissan 300ZX has given up its brakes both front and rear, and that includes the additional hydraulic OEM 300ZX caliper-based handbrake.

Poppin’ In the Hood

If you were wondering whether this truck has some extra ponies to back up its looks, it most certainly does. Nissan D21s share the same block as KA24-powered Nissan Silvias, but they differ in regards to intake and exhaust manifold setup. Using the truck parts in a turbo application would have been a right pain, so Chris instead used an S13 manifold to handle the intake side of the equation and a Rev9 cast manifold for the exhaust side. Mounted to the log-style manifold is a polished CX Racing T35R turbo.

The necessary fueling requirements are provided by a Walbro 255lph pump and regulated by an Aeromotive fuel pressure regulator.

Inside the block are Wiseco 8:1 forged pistons, a Brian Crower cam, and Eagle rods. A freshly rebuilt OEM head is bolted to the balanced short block via ARP head studs, while a Megasquirt standalone ECU tells the motor setup what to do and when to do it.

Out back, a subtle turn-down pipe terminates the 3-inch v-band exhaust system from the turbo back.

To get the tires turning, a refreshed stock transmission kicks power to a welded stock differential.

Of Course It Looks Good Too

The truck has seen a few visual revisions in Chris’s ownership, but its latest cleanly blends ’80s-inspired graphics with ’90s-inspired drift styling.

Grey Avery vinyl covers the entire truck, including the widened front fenders and rear bedsides. The quality of the vehicle’s new finish works as a rolling promotional item for Chris’s own shop, CJ Motoring.

The bumpers are from a Toyota and all of the LED lighting – including the clear tail lights, which are completely awesome – are also from CJ. The lighting package includes under-glow, because at this point, why wouldn’t it?

Inside, the interior is reminiscent of most tracked street cars with all creature comforts like carpet, sound deadening, and a radio retained. Corbeau buckets are affixed to the floor with Planted seat brackets, and a horizontal bar runs behind the seats to provide a safe anchor point for the Sparco harnesses.

A Grip Royal steering wheel replaces the large factory item, and the handbrake is a Twisted Images 6060 aluminum unit built for Wilwood master cylinders. The shift knob comes from We Are Likewise, while the gauge pod was handmade by Chris himself.

In its current form the truck has proven quite sorted at events, and it’s still quite capable on the street too.

While Chris did do much of the work to this truck with his own two hands, he’d like to shout out Beebani Customs, Alchemy Stdio 320, Rhode Fabrication, RZT Performance and Bavwerkshop for contributing with parts and wrench time when needed.

To bring things full circle with the intro, had Keiron not waded through the turbulent waves of Oceans City this year, then we’d likely never had the chance to feature this fine piece of automotive creativity. As a fan of both trucks and drifting I feel that would have been a shame.

Neatest feature I have seen in a while! Very cleanly executed truck.

No offense, but this truck was worth a whole article? I follow this guy on IG... his rear quarters are riveted and bondo'd like crap, his "roof spoiler" is literal house roof flashing, its vinyl wrapped, and has an eBay turbo kit... drift spec? He runs wheel spacers that convert the bolt pattern from 6 to 5 lug. I dare you to drift that bucket and not watch the wheels fall off... also, who the hell did the research for this article? "KA-powered silvias"... uh no. No silvia EVER came with a sohc KA

I used to drift with my turbo napz hardbody with 1.5” spacers all around and never had any issues. Plus my pieces together turbo kit did wonders even with that eBay special turbo. Not every drift build needs to be high dollar to be effective or fun for that matter 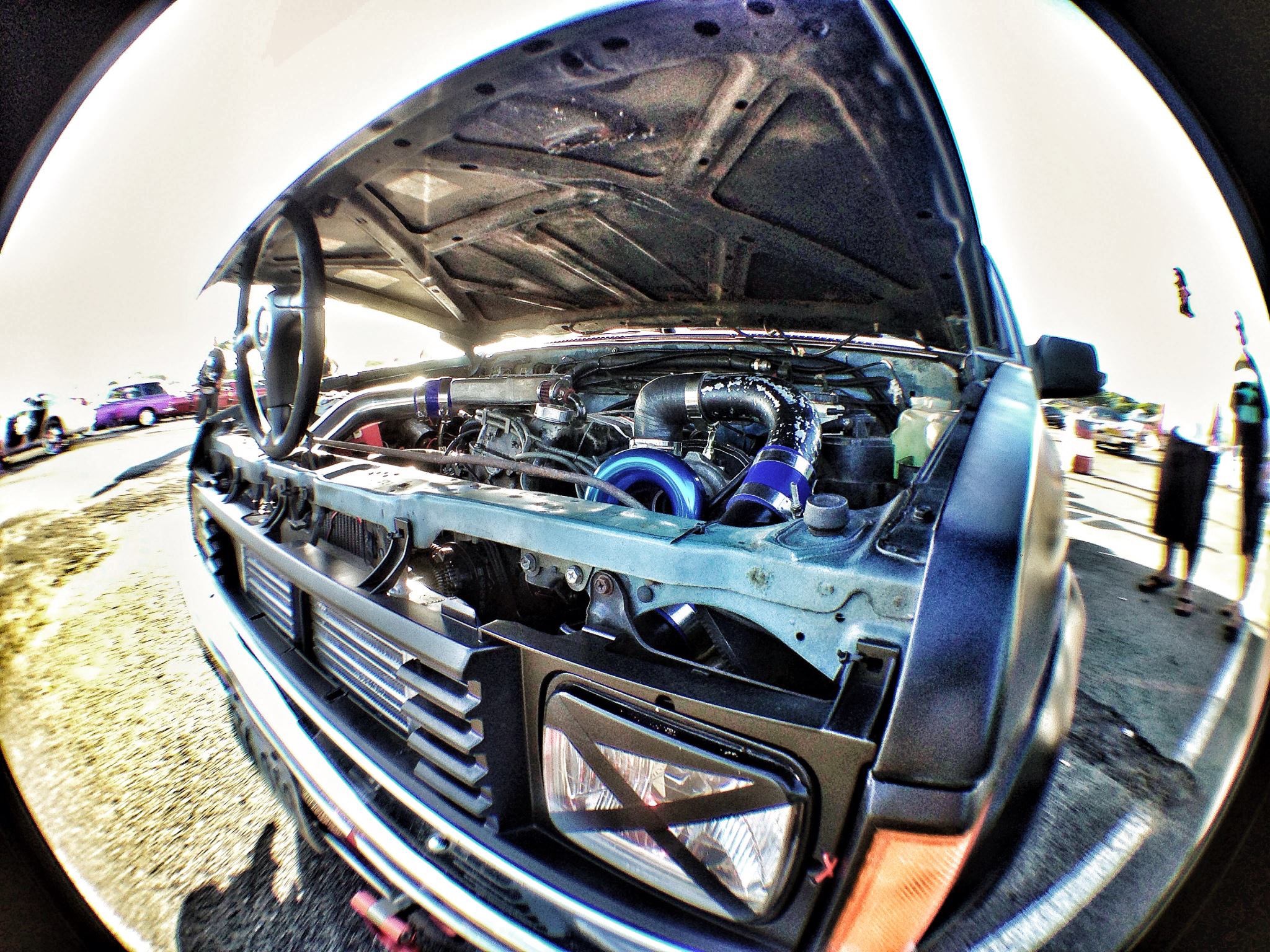 Some drift cars I've ridden in really pushed the concept of doing the most with less. Why would drift spec mean it has to be some crazy expensive overdone car?

yeah, you're mad mad. Get bent because your nonexistent car didn't get featured.

Stand back everyone, we have a professional here.

How about this... Don't follow him on instagram!! The guy spends alot of money to make himself happy and enjoy his ride. It doesn't matter what you have to say, obviously you don't enjoy your ride! So stop the jealousy shit and move on...

Yes this truck was worth a whole article.
Who cares if his quarters are “riveted and bondo'd like crap”, they look great and keep the body line.
Who cares what his cab spoiler is made of, it looks good.
I‘ve seen him drift and guess what none of the wheels fell off.
Keep that negativity to yourself guy.

bro this is speedhunters

We as a collective, IATSH and speedhunters aim to bring good car magazines not the same 300 r34s over and over again.

go back to superstreet or honda tuning mag
ricer.

Yeo hear me out. Shut up stupid

I have to say, I am a little taken aback by the sodium level in this comment. Anyway my name is Dave I'm "who the hell" made the error, I've changed it to 240sx, dock my pay one typo.

Here's a photo of the truck sliding:
https://www.instagram.com/p/BydF4-Nn27I/

I dont even own a car.

If you don't even own a car you really can't pick holes in someone elses. Now go take a shower and wash all that sand out of your vagina.

Wow you must really not like this kid huh

I just have a very large memeber.

Nice!! Mini truckin' could use a rollie-cage in the cab though.....

One of the sickest builds I’ve seen out there. The attention to detail and blood sweat and tears that went into this build is unmeasurable. Anyone who feels different is straight hatin’ since they don’t own this beautiful masterpiece. Oh and btw I’ve personally seen this truck drift many of times with my own eyes!

Wow, this is awesome. Always had a soft spot for mini trucks...but to make the chassis more than pliable for track use also?
Dreamy.

The blue tint on the photos tho. Too much

89-95 Toyota PU/4Runner bumper. It's from the face lift years since it doesn't have rivets holding the curved part. Cool build.

"situational bias"? Lol calm down, it's impossible to be biased against utter stupidity. This doesn't excuse the h20i coverage articles - but it would do nicely to just replace them. This is why speedhunters means anything, although "unrivaled" isn't the word and not a work of fine art, but a flaming aura of the very spirit of "enthusiast" it does cinder. It's rad, unique, and worth the feature of a real car mos def, and no "Ferrari" engines were wasted in its' making. Keep drifting real!

you had us in the first half, not gonna lie

I don't think I can like this truck, because I remember how EVERY SINGLE EXAMPLE of D21 I saw when I first got into cars had a big system and no ground clearance, being driven by DJ Jazzy Trevor.

Just picked up a white hardbody 5 speed. There was a previous post back in 2018 of a hardbody on TE37X Progressive Model wheel. Who knows the wheels spec? http://www.speedhunters.com/2018/11/te37-truck-division/

One of the most unique features I've seen in a while!! Great work

A Hard body with a squiggly line graphic! this took me waaay back to my early 90's Tyco Bandit R/C toy truck... and then I saw the "bring back the 90's" decal...

Anyone dissing this build knows very little about car customization. Body filler has been part of the game since the very first car was bolted together for the first time. And don't even get me started on bending metal to create custom pieces...