Unless you’ve been living under a rock, you’d have heard news of the SSC Tuatara’s recent 331mph (532km/h) record-setting top speed run. It’s amazing to see what can be achieved when you’re building a hypercar from the ground up to achieve such a feat. But equally impressive in our books is what a bunch of friends in Estonia have realized in a 30-year-old Nissan Skyline over the distance of a single standing mile.

My relationship with the people behind this GT-R predates its existence. In 2005, I was hanging on automotive forums, visiting local street races, and car spotting. This is also the year that I changed schools and met my new Russian literature teacher, who drove a classic cherry red Lada 2101. This was no ordinary Žiguli though. Unbeknownst to me at the beginning, the humble 2101 had been repowered by 3.0L turbo Mitsubishi 3000GT 6G72 engine tuned to 600hp.

As soon as I learned about the swap, I paid more attention in literature class, and also to the unassuming Lada in the teacher’s carpark. Before long I combined the two, writing my very first car article for a prominent Russian automotive website. My teacher’s husband, and the man behind the Lada build, was talented mechanic and tuner Aleksandr Сherjomushkin.

Back then, drag racing was the most popular grassroots motorsport in Estonia, and Aleksandr was responsible for a ABFlug S900-kitted JZA80 Supra that dominated local events. The quarter mile wasn’t all the team was interested in though. With plenty of horsepower on top, the wide-body Toyota was well suited for standing-mile racing, and in 2007, with Maksim Zolotarjov behind the wheel, the Supra became the first car in Estonia to eclipse 300km/h (186mph).

Estonian speed runs take place at a disused Soviet airfield outside the small city of Haapsalu. It’s the most traditional house of speed that can be found in this small Eastern European country. The concrete surface is not ideal for the speeds that are achieved nowadays, but this doesn’t stop drivers pushing themselves and their cars to the absolute limit.

Note: I’m using archival pictures from previous years of competition, so the cars in 2020 could look slightly different.

Roul Liidemann, the rival in this story, entered the Estonian 300km/h standing mile club in his Viper GTS in 2008 with a 302km/h (187mph) time slip. Back then it was running an 8.0L supercharged Dodge engine.

In 2011, all the standing mile glory went to the GT-R team after they ran 319km/h (198mph) – a new Estonian standing mile speed record. The Viper wasn’t a slouch, but this particular year only managed to clock 293km/h (182mph).

For a couple of years later both teams went silent, but rumors were abound that they were each cooking up something. In 2014, the Viper GTS returned with a new twin-turbo setup and reset the record to 343km/h (213mph).

The GT-R team needed a comeback, and a year later they returned to the airfield with a very different-looking car and a new 5.6L twin-turbocharged Nissan VK56 V8 under the hood. Driver Aleksandr Ljahh (not to be confused with the mechanic, Aleksandr Сherjomushkin) quickly upset the Viper owner with a new record of exactly 350km/h (217mph).

This record held for two years until a slightly more beefed-up Viper achieved 362km/h in 2017. That year the GT-R ran 350km/h on the dot again, but over the next two, the top speeds of both cars decreased due to mechanical issues.

But this year the tide turned in a major way. The BNR32 Nissan Skyline GT-R, with no engine changes from 2016, but running an RWD setup after blowing its front differential during a pre-event dyno session, made history when it hit 402km/h (250mph) at the one-mile mark. As soon as Viper owner/driver Roul Liidemann saw the new record, he conceded that improving his top speed to match the GT-R would be impossible.

For comparison, a brand new Bugatti Chiron can reaches 347km/h (215mph) on the standing-mile run, while the Bugatti Veyron only managed 323km/h (204mph). The truth is, reaching standing-mile speeds in the 300km/h to 330km/h range is achievable for many, but from there out every extra kilometer per hour requires a lot of work – just adding a bigger turbo won’t cut it.

On the record-setting day, I was on a rare (in the Covid age) trip outside of the country, so as soon as I heard the news, I set up a time to visit Aleksandr’s garage. I wanted to see the latest evolution of the car and talk through the team’s experience in getting to where it’s at today.

Let’s dive into the car itself, because it’s not a typical R32 even by drag racing standards. It arrived in Estonia as a mostly-stock Skyline GT-R, but only stayed that way for a short time. Through all its development though, the team have tried to keep the car as factory-looking possible.

During its 2015 upgrade, where the original RB engine was replaced with a built VK56 V8 from a Nissan Titan pickup truck, every aspect of the car was reengineered to achieve 400km/h.

Nismo used the VK56, naturally aspirated, in their R35 GT-R GT1 race car where it produced 591hp and won the 2011 FIA GT1 World Championship. Six hundred horsepower is one thing, but Aleksandr’s calculation said he required 1,500hp to reach 400km/h over a standing mile.

The VK56 engine block has a reputation for being able to handle 1,000hp, but anything more is a road that few have traveled. There was only one way Aleksandr could find out how tough it is, and the mechanics started by adding two Garrett GTX3582 turbochargers and 2.2bar (32psi) of boost pressure. As for the engine components, they’re a secret, but you can bet that there are numerous custom parts in the mix here.

It definitely wasn’t an easy road to 1,500hp. Aleksandr can’t remember how many blown head gaskets there have been, but it’s a lot. The team tried so many different options over the years, but the problem just kept repeating. Eventually Aleksandr figured it out.

For this year’s record attempt, the engine’s cooling system was improved and relocated to the rear of the car, opening up room for a dry-sump system in the front. Cooling is one of the things that differentiate this build from a typical drag car, which often don’t have any cooling at all.

A custom 5-speed gearbox was built by Samsonas especially for the project. Initially the team was going to use a 6-speed unit, but the engineers at Samsonas felt that it wouldn’t hold up and recommended five chunky gears instead. For the clutch, Aleksandr and his guys didn’t find anything suitable on the market, so they simply designed their own five-disc carbon fiber unit.

Given the number of aftermarket parts used on this build, you might be surprised to learn that the suspension is OEM. A couple of different options were tested, but a fresh set of factory shocks proved best for handling all the imperfections of a Soviet-era concrete airfield. Meanwhile, the wheels pay homage to JDM culture of the past. In the rear we have 18-inch Volk Racing Group CV Pro rims wrapped in 265-section tires, while the fronts are a slightly narrower set of Blitz Technospeed Z1s.

For the 2020 record attempt, the GT-R’s engine was first tuned for its lowest possible power, around 600hp, and they’d gradually go from there. The first run was a big success with a new record of 394km/h (244mph), but the team knew there was a lot more in it as the car was twitchy on the first half of the course. Apart from a deformed hood everything looked good; Aleksandr tidied up the tune and the Skyline was ready to hit the mile again. This time the run ended with the commentator yelling “402! 402! 402!”.

My literature teacher occasionally stunned our class with a philosophical “and now what?” parable, pointing out that there is an inherent flaw in setting life goals. So obviously, I asked Aleksandr what the future holds for the Skyline. He pointed out that their record kickstarted a fresh wave of progress in the competition, and that human beings will always want to go faster, even in this fast-paced world. As for the GT-R, it still has to prove itself in a 4WD setup.

The GT-R on Speedhunters

I remember the Lada from local magazine Autoleht. It fancied a mean looking grille and spoke wheels. Yes, its 600 bhp was driven by a female.

Great photos and write up , what a car !

This is a pretty cool R32 build

A GTR Autobahn build would be so nice

I figure that If they keep adding horsepower and increasing speed to the GTR, the concrete pavement will get ripped-out eventually.

As for the philosophical “and now what?” parable, could the answer be "rocket"?

This is quite a machine, 400 kph is no joke! Curious about that bracing/diffuser in exhaust dump tubes.

Also, can we please get an updated feature on that 6G72 Lada?! 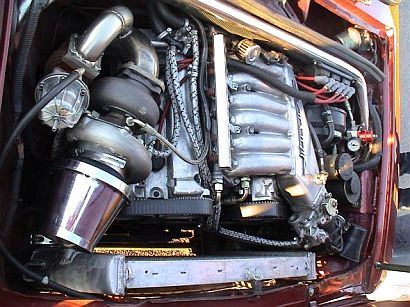 I also did feature more than decade ago for Latvian tuning magazine..here it is.. 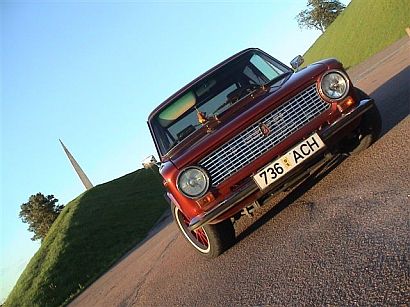 It is normal to stop any large pieces of turbine wheel in the event of a turbocharger failure.

Thanks for sharing the story Vladimir, and thanks to the team for giving access. Surely you don't mean that the car went 394kmh on 600hp though?

I wonder if they considered a Holinger gearbox? This is way beyond Group A territory but no doubt Holinger could build something special. Something for the 500kmh goal anyway...

Very interesting, I have seen plenty of Pro Mod turbos with crossbars set in the compressor housings, but I never thought about a safety measure for the turbine wheel. Learn something new every day!

they started the run on minimal settings (600hp) and already from 3rd gear the power was increased! Samsonas is a product made closer to Estonia, so I'm guessing it was just easier to work with them.

Thanks Vladimir, I didn't think of boost by gear but of course that makes sense.

Man, I'd like to see the Viper go faster with a twin turbo 8.4-litre engine from the later Vipers. I think it should be able to crack the 400 km/h mark too, given the body is quite smooth.

And agree with some of the guys here: we need a feature on that 6G72-powered Lada!

Nobody has seen the Lada for more than 10 years. The last time I saw it it had a chopped roof but was hopelessly put away into a garage.

As mentioned, because it wasn't sold here, nobody really knows what it is. There's only a handful of them imported here, and I've never seen another in the wild which suits me perfectly.jobztip.com

With aerodynamics such a huge factor at these speeds why not show more attention to it? Surely that stock bumper could be improved upon no?

A couple of years back they had an aerodynamic nose, but I'm guessing the difference is not that big when you're the only one in the "400km/h club" so they wanted to keep the GT-R as stock as possible for the JDM fans.

Wow what a cooling system.Also, its pretty rare seeing one of those old vipers ya know.

I saw Them in Estonia. Its monstr !

Incredible Skyline GTR! My buddy used to have a GTR project back in the days. He's at 1000hp when he had to sell it for a family car. Now we are off road enthusiasts and he's thinking of getting another GTR project. We'll just finish installing the suspension from 4Wheelonline onto the Wrangler and we'll check out a GTR for sale. Those machines have so much potential.

Awesome car and an awesome story!

I think this thing is a bot!

Can we please ban this person Speedhunters? They're on every single new article.