For those of you who haven’t read Project 51’s introduction, I came to this realization by diving head first into a sea of parts that I hope can be reassembled into a 1951 GMC pickup.

I did this knowing how to wrench a little bit, but not nearly with the level of confidence I have today. Throughout the project I’ve managed to bob up and down like a buoy. A lot of the time things have gone swimmingly; other times I’ve found myself shipwrecked, surrounded by bits of scrap metal and parts receipts.

Aquatic analogies aside, home projects are a war fought on several fronts. Time and money are the most obvious rivals, however the mental skirmishes are just as important. Projects can be draining, especially during the stages where they resemble little more than a burning pile of money.

Before I set sail (sorry) on my journey, I had a number of people tell me about the ‘five-year curse’. Year five, of having an immobile object, seems to be roughly the time most people lose interest and abandon ship (dammit).

2020 marks my fifth year with my project, and while I had my doubts about the curse going in, I totally get it now. A tremendous amount of change can happen in a five-year span. And these changes – which often have nothing to do with the project – can turn what was once a dream into a nightmare.

Around year three I realized I needed to work on keeping my mental state positive throughout the build or it would never get finished. Here are three things helping me stay on track…

People much more successful than myself have written at length about the importance of creating lists.

There’s a famous saying that goes: ‘How do you eat an elephant? One bite at a time’. That’s a nice quote, but even still, an elephant sandwich is a lot of bites and one’s bound to get tired, or at the very least full along the way.

Lists are a great way of organizing stray thoughts and breaking large systems of a vehicle into smaller bits. My lists are divided, and I rewrite them fairly often. Currently they’re separated by chassis, cab, motor and suspension.

The simple act of running a marker through a job has proven extremely satisfying. Ironically, so does adding new things to the list. It’s shown growth in my own ability to anticipate the scope future tasks before they throw my timeline off.

My lists also help control scope creep. If a new idea pops into my head I list it out. Grounding expectations in your own reality helps manage disappointment. For example, several people suggested I add a turbo; it’s ‘easy’, they said.

I listed it out, measured said list against my own skills, and at least for now have opted to stay naturally aspirated. The skills required to put a turbo kit together – properly – might push me closer to the 10-year curse…

Somewhat related to the above, I’ve also developed an odd habit of not completely cleaning my work bench until the current item on my list is completed. It’s a bit of a silly ritual, but one that helps keep me on task. The idea of cleaning my bench, part way through one job to start another, is enough of a deterrent to see the original job through. Admittedly, it is a problem if I am actually working from the desk.

Step 2: Get The Family Involved

Much of the work that’s taken place between update one and this one has centered around sheet metal, be it repairing it or hanging it.

Building a core support, making bumper mounts, replacing cab corners, cursing out door hinge pins – these are all drawn-out tasks that are not particularly interesting to read about. These tasks also look like absolutely zero progress to those in my household.

However, each of those jobs facilitated the truck resembling a vehicle, and that caused considerably more interest in the project around the dinner table.

In particular, my six-year-old son has taken a pretty keen interest in the truck. Every few days he wants to come out to either take photos or help bolt something together.

And here’s one of his shots. On occasion my wife has even wandered into the garage to offer an extra hand. Their encouragement not only keeps me going, it also allows me to steal a few extra minutes out of the week to toil away. Passing the bug down a generation isn’t half bad either.

My final tip is to celebrate milestones, and there are many different ways to do this. Often people choose adult beverages; I choose simply staring at the damn thing. I can’t tell you how many times I’ve opened the garage, looked at my progress, then closed the garage once more.

You know the saying if you don’t turn back and look at it you don’t have the right car? Well, I think if you don’t take the time to sit and stare at your project – often in complete silence – then you’re not building the right vehicle.

Taking a moment to look at how far you’ve come is completely worth it, even if doing so temporarily delays any sort of measurable work.

During COVID-19 quarantine, I worked my way through a list of items I had previously reserved for the body shop, and in doing so revealed an opportunity to push the truck outside as a unit for the first time since 2016.

Fittingly, I was able to get the same friend that set me down this path to help. The inspirational-to-me truck he once owned is long gone, now replaced by a new longterm project.

True to Speedhunter form, I couldn’t leave you without at least a few photos of it.

Being able to step more than two-feet back and look at something I carried into the garage in pieces was an almost indescribable feeling. I had something to show for the bloody knuckles, caffeine-fueled mornings, and significantly thinner wallet.

Of course, the truck now has to come back apart to move forward, but taking a few hours out of my day to pull it off the jack stands and confirm my vision is where I want it to be was incredibly worthwhile.

Mental gas tank refueled, I’m ready to push through to the next milestone and strike a few more items from my list.

Garage warriors, what methods help you see your project through to the end?

Thanks for motivating me.

Force yourself to knock something off your list every week. Pick an easy project if you don't feel like working on it (most times doing one thing leads to another). Don't let progress completely stall because it gets harder to restart the longer it sits.

This is a good point! Usually I set a goal per night. Some nights it gets a little frustrating when I don't hit it but at least I only slightly disappointed myself haha.

Great write-up. The family part is especially important. Can you imagine the joy you will get teaching your son to drive in this truck?

Currently he finds all the manual controls; vents and windows super fun and new.

People who suggest a modification and say "its easy" 9 times out of 10 have never done it or tried it to their own cars. It's infuriating.
This was an EXCELLENT article, as someone with an S13 in pieces (its a rescue and a semi-resto), I appreciate the hell out of it.

Question: What do you prefer to use when making a list on the windshield? Sharpie? Paint stick? Other??

Crayola marker lol. Those windshields are getting replaced.

And I agree it's easy to mod for someone else from a chair.

I'm running into something different where getting closer to completion and the smaller bits and pieces left to do seem so demotivational. Probably something like; putting so much time and money into something and now it "actually has to all work". Perhaps this is similar to writers block?

It is very interesting blog

Great article and timely for those of us who are also in the same boat. Agree 100% about being able to step back more than 2 feet and take in what you've created - it's the sum of the parts more than the whole.

I used to make lists, which turned into lists of lists.
But now I use a Kanban board. This helps me 'bucket' stages of progress, specifically identifying which items are 'blocking' others i.e. waiting for parts / paint / etc. Interior, exterior, engine, trans, suspension all have different colors to identify the task, type and stage it is at.
And the new ideas always start on the backlog.
The success of moving something through the buckets is as rewarding as crossing something off

Hahah! Are you a developer? Or in the tech industry? I almost started talking about the agile process then I realized I might be going too deep.

Thank you for the feedback, I hope with this series to hit the garage guys hardest!

When ever I felt demotivated I’d go to the local car show or jump online and look at all sorts of cars and even bikes. Seeing what could be always pushed me to get stuck into the garage. Now I’ve sold my car to work on my newly bought house, I miss the nights in the garage. And working on the house is no where near as fun.

Sit and stare for sure. Spent Friday lunch here getting it out and looking at all angles. 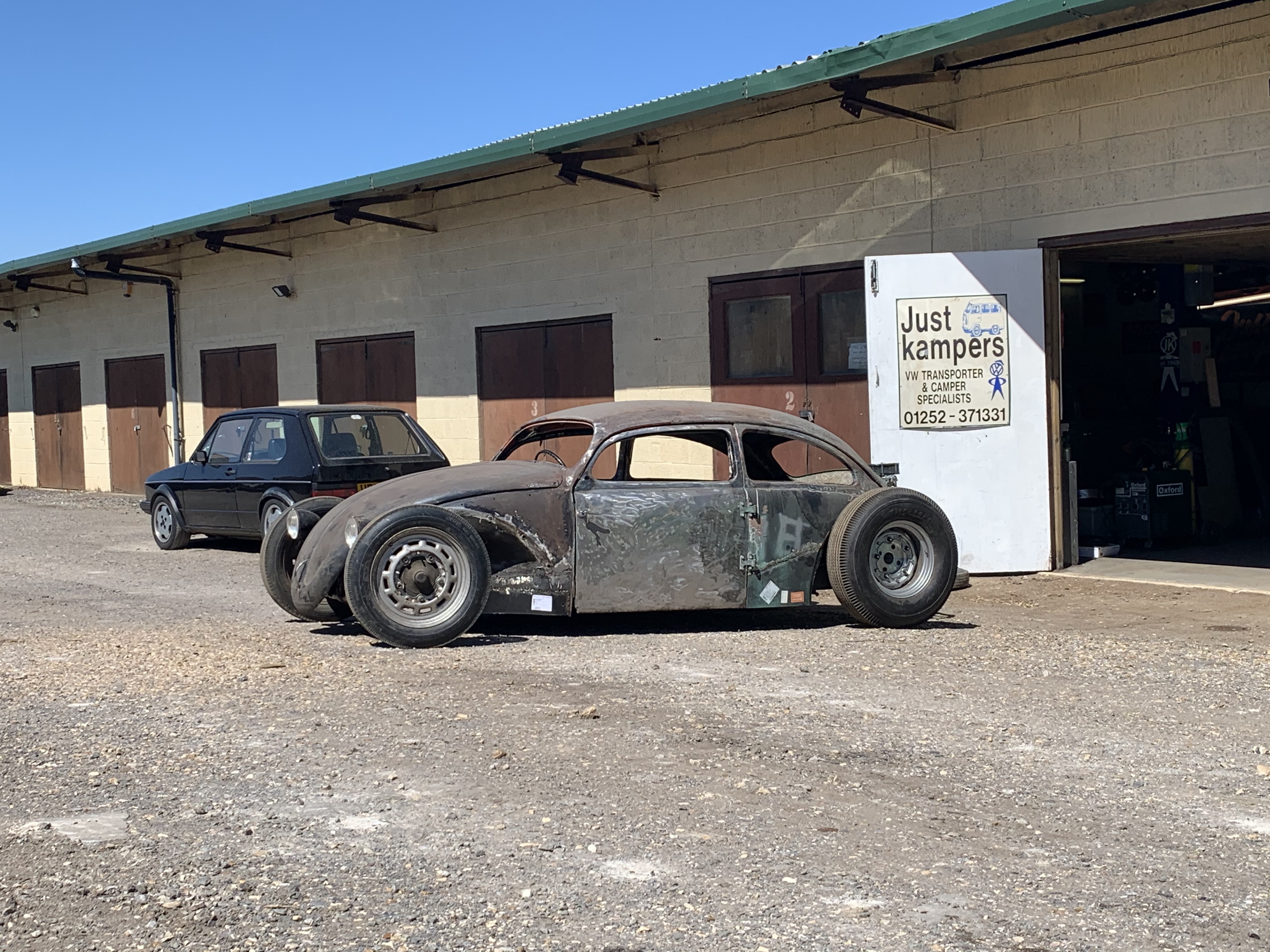 1) "Eyeball engineering" is greatly underrated. Occasionally, I roll the project out of the garage and into the driveway, grab a cup of coffee/beer/whatever and sit at least 30 feet away and stare at it... from all angles, including above, After 30 minutes or so, any "flaws" jump out at me, and I'm more inspired to reattack my list.

2) If you *really* like lists, consider using Microsoft Project. It can combine your task list with a schedule and budget.