This year, the first production road car model produced by VAZ (Volzhsky Avtomobilny Zavod) – the VAZ-2101 – celebrates its 50th birthday. While the compact Soviet sedan was originally designed as an everyman’s car, five decades on the model has found favor in modern-day Russian motorsport circles – and for good reason: these cars are lightweight, rear-wheel drive, and with the right set of modifications can be very fast in skilled hands.

While most stories on the 2101 focus on its link to the Fiat 124, I want to show you what a modern competition-spec example looks like. You’ve likely seen VAZ-2101s setup for winter drift purposes, but this one from Kramar Motorsport was built to race in the popular Moscow Classic Grand Prix championship.

The series itself has a strict set of rules, but basically speaking, the cars themselves must be pre-1987, rear-wheel drive, and use carburetors. Both domestic models and those from foreign countries are eligible. While the rulebook preserves the historical nature of the cars competing in the Moscow Classic GP, there are areas where modern solutions can be applied.

Moving a few meters away from the Kramar 2101 – which competes in the 1,600cc class – allows us to admire its beauty. The extended wheel arches and front spoiler imitate a vintage body kit known as ‘kolobok’, although the fenders have been refined with slit vents to expel hot air from around the wheels. Overall though, it still has the look of a ‘70s touring car.

The chrome door handles, headlight surrounds and side moldings are remnants of a bygone era of automotive styling; you rarely see these sort of details on modern cars.

The interior swaps vintage vibes for a more contemporary feel. In fact, it’s really only the dashboard shape, the door cards, and an extremely long gear shifter that hint at the true age of the cabin. Compare it to the interior of VAZ-2101 race car back in the ’70s, which at best would have lap seat belt and perhaps not any form of roll-over protection.

Although the engine setup is old school, Kramar Motorsport have successfully married some modern tech in the form of a digital dash/logger display and an Innovate LM-2 air/fuel ratio monitor.

You may have noticed the hydraulic parking brake. No, it isn’t about drifting; it’s required for a flawless start off the line.

Under the hood is period-correct VAZ 1.6-liter four-cylinder engine that’s been built up with high-compression forged pistons, necessitating the use of 100-octane fuel. It’s a basic setup, but one that delivers around 140hp – almost double the original power output.

Supplying fuel to the engine via a down-draught carburetor is a Facet pump drawing from a custom tank.

Radical alterations to the suspension are prohibited; the front end must use a traditional double wishbone arrangement, while the rear must maintain its live axle with longitudinal arms and Panhard rod.

According to the rulebook, 13-inch wheels up to a maximum of 8-inches wide car be used, but the spec tyre is 175/70R13, so some real stretch is possible. If we dropped this car a little, it would look nice at a stance event.

On the subject of wide, small-diameter wheels, in Soviet times they simply didn’t exist in this country. To get around this problem, our ancestors took matters into their own hands, cutting steel wheels down the middle of their barrels and welding in extra strips of metal. This method is still popular today with some Russian modifying styles.

Brakes must be stock disc/drum, but with high-temp pads and shoes in use, coupled with the car’s low weight, there’s no problem with stopping – even after a 1,000km-long marathon.

Once upon item, the car that Soviet motorsport enthusiasts drove during the weekday was the very same car they competed in on the weekend. And often, these owner-drivers would carry around their ‘race’ engines in the trunk, and swap them into their cars at the track.

Those days might be long gone now, but it’s still very cool to see these Soviet classics going door-to-door. Thanks to companies like Kramar Motorsport, the future is bright for VAZ-2101 racing too. 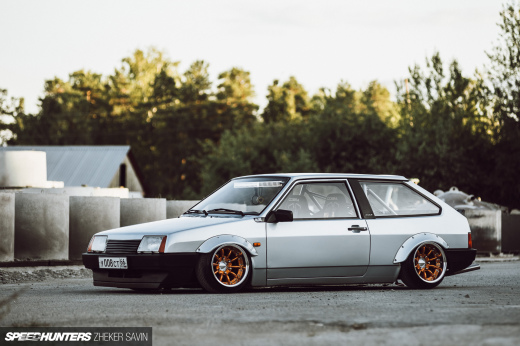 Inspired By Japan, Built In Russia

GAZ-24: From Taxi Stand To The Race Track

This is every kind of excellent.

This oldie car may have the aerodynamic of a brick, but I am lovin' it!

It's always fascinating to see those cool little soviet machine.

Not really Soviet. In essence its a downgraded Fiat with heavier sheetmetal....

The very same, produced since 1966 in Italy. The VAZ is a modified version of that car which began as a licence deal. More robust engines (read: Slower by a lot-20 horsepower for the Russian police version), thicker sheetmetal ( read: Heavier by a lot: +105KG), drums in the rear ( read: Cheaper ) and different suspension (read: Softer and more ground clearance) are the most noticeable changes.

Only the Spanish version made by SEAT is considered superior: It came with a 1.8 or 2.0 twincam (1.8 is the faster engine with + 33BHP). The Fiat version only came with a 1.6 twincam (95BHP. And the Russian version had to make do with 1.5 single cam that where only reserved for the Russian police at that time (with a meager 70BHP if that at all?).

why 210x lada build are hard to find? these lil machines are fascinating

Most of them built in too low quality, so it doesn't make sense to show them anywhere. It is too easy to get one in eastern Europe; it decreases interest and attention to details. I hope people in post-Soviet countries will understand that these cares are a treasure for different styles and modifications from bolt restoration to drifting. I am a big fan, and I'm restoring one. They are joyful to drive even at the dead-stock condition, such a European classic.

In Soviet Russia, you don't drive car
Car drives you

While these cars may look like cool a 1960s rudiment to europeans and americans, here in russia this is just a regular car. They were produced up untill 2013 (Later production continued, under license, in Egypt). Classic ladas are dirt cheap, more or less reliable, and very cheap and easy to repair. (classic ladas are all of rwd cars, that are more or less based on the fiat 124, 2101-2107 and all in between) And, since cheapnes is about the only criteria on which people choose cars here, in Russia many people prefer them to even more modern foreign cars. For many people old ladas are just daily commuters, and not a lifestyle element.

But then again, since they are cheap, disposable and easy to maintain, many people but them as their first car. I did. My very first car was a 2101 from 1981, I just recently sold it, and gom myself a 1988 VAZ 2108. Being a first car to many, it naturally became a very popular platform for modifications. You can find these done in about every style imaginable. From off-roaders and full on race cars, to hommages to ridiculous japaneese bosozoku cars.

Fun fact. If you combine production runs of all classic rwd ladas, it will become second most produced car in the world, only a little bit short of a Beetle. But, unlike the beetle, ladas aren very common outside former soviet union. I strongly suspect, if you add up all of fiat 124s and its clones, such as ladas, seats, tofases, kias (yea, kia also started out as a fiat 124) and others, this will become the most produced platform in the world.