Gaston Rossato was nine years old when he bought his first car. But it wasn’t for himself.

No, Gaston saw potential in the dirty and tired ’81 Corolla coupe three doors down when his neighbor stuck a for sale sign in it. The asking price was $200, but Gaston thought he could do better than that. So he talked to his dad Lucas, who owned a used car dealership, and convinced him that there was money to be made on the five-speed Toyota.

Gaston eventually was able to secure a $100 loan for his project, so he walked over to the neighbor’s and started negotiating. Ultimately the neighbor agreed to Gaston’s price, but only if he came back with his parents. $100 and some paperwork later, Gaston was scrubbing away on his new project car.

Fast-forward a couple weeks and the car sold for $250 on Lucas’s lot. I’m not sure what the interest rate was on Gaston’s loan, but the $150 he cleared on the Corolla with a bit of elbow grease was the beginning of something much bigger.

Gaston has since moved on from $200 Corollas, and as he drove me around last year in the modified Ferrari F430 from his collection, he explained how his position as owner, curator, and more at The Barn Miami is a dream come true.

Growing up around cars coming and going, an affinity for the automobile was always in his blood. But as Gaston acquired his license and began to enjoy cars firsthand, there would always be another car that piqued his interest. After all, you can only drive one car at once, but wouldn’t it be nice if you could pick whatever car you wanted each time you felt the need to go for a drive?

By running a dealership, Gaston has — at least for a time — access to many of his dream cars. Of course, just like with long-term ownership, there are pros and cons to be experienced. He can test drive his favorite cars as much as he wants, he can see what simple maintenance looks like on them, but his business also feels the pain when more serious work is required at an exotic dealership. But it’s all part of the deal, and it’s certainly not a bad one if you can make it work.

Gaston further explained that there’s no way to really know what your dream car really is without experiencing it, and he knew that this line of work would open the door to a multitude of fantastic automotive experiences.

Ultimately, that thought was the seed that has grown into The Barn Miami, which Gaston runs along with his father. His brother Renzo is becoming more involved as things expand, too.

We started out by stopping by The Barn Miami’s storage warehouse on the outskirts of Miami. It’s not a huge space, but looking at each of the cars in the shop it’s clear that it’s a quality-over-quantity type of operation.

I loved the total range of cars on display, from the V12-powered elephants in the room, to the small and affordable drivers’ cars, with a bit of Americana sprinkled in.

Before we headed to the showroom I noticed a map in the lobby showing all of the locations where The Barn Miami has shipped cars off to. I’ve never given dealer-owned cars all that much thought before, but for a boutique collection like this it’s actually quite pleasant to think of all of these cars reaching happy new owners. Not to mention the memories, past and future, that the automobile brings us all.

Enjoy the gallery below from The Barn Miami’s showroom, which has since moved to new location. Next time, though, we might have to take out more than one Italian bird. Does that sound fine with you, Gaston?

More stories from Miami on Speedhunters 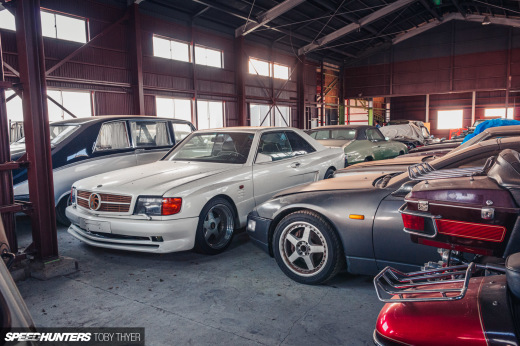