One Of The All-Time Greats

Think of super-desirable Japanese cars and the Nissan Skyline BNR34 GT-R will always be near the top of the list. Add to that a large number of high quality modifications and you’re peaking.

You are allowed two, and only two opinions on the R34: either you believe it’s one of the most iconic, most badass Japanese performance cars ever made, or you’re wrong.

Anwar, the owner the BNR34 GT-R I’m about to show you, has been a long-time fan of the Datsun/Nissan brand, starting out with a modified Datsun Stanza back in the ’80s. That’s where the speed bug bit him, and he eventually moved on to a modified Skyline GTX that he used to dominate street races with. The local police knew Anwar was racing, and made him very aware of that fact that one day they’d catch him, and that there’d be serious consequences. It was his cue to sell the car and concentrate family life. However, Anwar did promise himself that he’d one day buy a Nissan Skyline GT-R, even though they were never officially sold here in South Africa.

Fast forward a few years, and that promise was finally made good on with an BCNR33 Skyline GT-R packing 550hp. Bringing a car like this into South Africa, and more importantly, registering it for road use, was no easy feat, but Anwar’s persistence ultimately paid off. With lots of interest in the R33, it was eventually sold, but quickly replaced with an R34 GT-R – one of four now in his collection. Each one is in a different stage of tune, but this 2001 car – a Vspec II to be precise – might be the pick of the bunch for me.

The R34 GT-R has very well defined, square-edged body lines, so when it comes to the exterior it’s not the sort of car you really need to mess around with. But every once in a while, you come across an example that’s gone under the knife with stunning results. This is one of those times.

I’d never before seen one of SunLine Racing’s wide-body conversions in person, and just a handful of them on the internet. It’s rare to say the least.

The kit consists of wide front fenders, wide rear fenders, and deep side skirts constructed from CFRP (carbon fiber reinforced plastic), which is both strong and light. The fenders add 30mm of width per side to the already wide GT-R, and it looks awesome. Overall, the kit blends really well with the stock body parts too, which is always a concern with aftermarket pieces.

Adding to the SunLine Racing wide-body parts are carbon fiber eyelids and a C-West front bumper with some carbon canards attached. The stock bonnet has been replaced with a Top Secret unit, complete with latch fasteners and carbon fiber NACA-style ducts.

At the back you’ll find another pair of carbon fiber canards, plus carbon extended wing stands to mount the boot spoiler, and lastly a Top Secret carbon fiber diffuser. For a more modern touch, the taillights were replaced with LED-equipped units.

Finishing off the visual changes are tried and trusted RAYS Volk Racing CE28s in an 18×10.5-inch fitment, wrapped in 285/35R18 tyres. Through the black spokes it’s not hard to spot the aftermarket brake package feating Vari Racing 8-pot calipers with vented discs in the front and a Vari 6-pot setup in the rear.

Suspension-wise, all of the original arms and braces have been upgraded and there’s EDFC-equipped Tein coilovers installed.

Of course, the heart of an R34 Skyline GT-R is one of its best attributes – the highly desirable and highly tuneable RB26DETT. A single turbo conversion is one that many BNR34 owners chasing high horsepower undertake, but to ensure the car was both drivable and responsive, twins are retained here. They’re not stock, but Garrett GT2871 units that blow into a large Autobahn88 front-mount intercooler.

The engine itself is built around an N1 block and features a full HKS 2.8-liter kit with forged pistons, rods and stroker crank. Up top, the cylinder head has been decked out with HKS cams and adjustable gears, oversized valves, and uprated valve springs and retainers. There’s also a Tomei head gasket and a Gates Racing cambelt.

An engine of this specification requires plenty of fuel, and the high-octane stuff – a 75% ethanol blend – is delivered via dual pumps and filters, a fuel surge tank, Aeromotive FPR and an HKS fuel rail into large injectors. For cooling, there’s an Evolve aluminum race radiator.

The engine makes all the right noises, thanks in part to a Tomei Expreme Ti titanium exhaust system, which looks and sounds great. It’s all the work of South Africa’s RB expert, Steve Clark from NoSweat Racing Services, who tuned the engine through a Haltech Platinum Pro ECU to its current 800hp specification.

Getting the power to all four is the original Getrag 6-speed gearbox-based driveline, but here it’s been upgraded with an OS Giken triple-plate clutch and flywheel, and a Nismo limited slip differential.

In the cockpit it’s all business, as it should be in a car like this. There’s a Momo Competition steering wheel with a quick-release hub, along with a Top Secret gear knob.

The original seating front and rear was retained, but a Cusco 4-point roll cage has been fitted around it.

Given its performance potential, the original 180km/h speedometer cluster has been replaced with a Nismo unit that reads all the up to 320km/h and 11,000rpm. The dashboard is now also home to a Zeitronix ethanol content gauge and wide-band air/fuel ratio display, HKS EVC boost controller, and the aforementioned Tein damper controller.

A stock R34 is already special, but a properly built all-rounder like this one is truly epic. It has a more unique look, as well as being perfectly suited for some twisty mountain roads, or even a quick traffic light to traffic light race.

If only their prices could drop instead of skyrocketing all the time, then more of us could see our dreams come true. If money is no issue, though, you can actually get your hands on the original SunLine Racing demo car, which recently went up for sale recently. Go look here and thank me later.

I don't know if Im the only one but I love and hate R34s. Its a beautiful car, it performs amazingly, and the sounds are great. On the other had its way too over hyped, and its predecessors dont get the credit or hype they deserve.

Yeah the hype is insufferable, particularly if your Australian. We've had them since release, the original racing history at bathurst is incredible but this "USA JDM 'so cool man' ERA" has really ruined it...

I love the 32's as much as the 34's, but this is a nice clean beautiful example of a modded one!!

I'm sure the owner is happy but to me this is atrocious.

I will say it's good to see someone who has changed the looks AND upgraded the engine and running gear, as quite often it's a case of "all show, no go."

Really? I would have said the Skyline along with the Supra represent cars that are very rarely 'all show'. 99% of them have the engine work done first as the parts catalog is so expansive!

All was nice and great until I saw the eyelids. These abominations were already eyesores on mid/late 90's euro gti, doing it on an r34 deserves being stoned to death.

I'm on the fence about this one. It certainly looks menacing, and it probably sounds awesome too, but the Sunline Racing widebody just looks... off to me. Plus, it's a myth that you can only get good response with twin turbos and not a properly sized (read: not too big) single turbo, as MotiveDVD demonstrated. Turbo tech has come a long way since the RB26DETT last rolled off the production line, and a high mount single is much easier to maintain than a pair of low mount twins.

But I'm certainly in no position to nitpick Anwar's build; After all, he has one and I probably never will, judging by how the prices of these beauties are going. He can do with it and enjoy it as he pleases. It's clear this is a passion project and I respect that.

Just to me, Nismo body parts and subtle but effective touches like Dino's R34 and Aki Itoh's R33 will always look better on a Skyline than a wild widebody.

Interestingly enough, the actual SunLine Racing demo car just went up for sale by a private owner in the UK...

The Skyline GTR R34 is the JDM dream
A modern classic

Not a massive fan of the bodykit but each to their own. Owning a R34 GTR with a 2.8L stroker motor in Cape Town would be epic though. Stellenbosch to Franschhoek drive would be amazing! Wish I could ship mine to CPT

Some decent parts to this build, but overall the car has been butchered! Poor fitting body, and what kind of garbage are those brakes?

Great to see a GTR feature from Cape Town.

Most people won't realize what it takes to get one and then mod it in SA. Must have cost a fortune.

Hats off to Anwar.
Hope he Dices the kak out of all the Rich people in Supercars.

Hello Stefan, can you please feature the 400R that races in South African drags please? I wanna know why in the world would someone abuse a rare car as a 400R, specially when a lot of people want one.

As a fellow South African it's always nice to see builds from SA. As @Lano said, it's actually quite difficult to get a GT-R in SA and then to mod it, especially to the degree that Anwar's is.

Prop to you Anwar, hope you're giving the rich boys kak!

Always been a great Nissan man.. 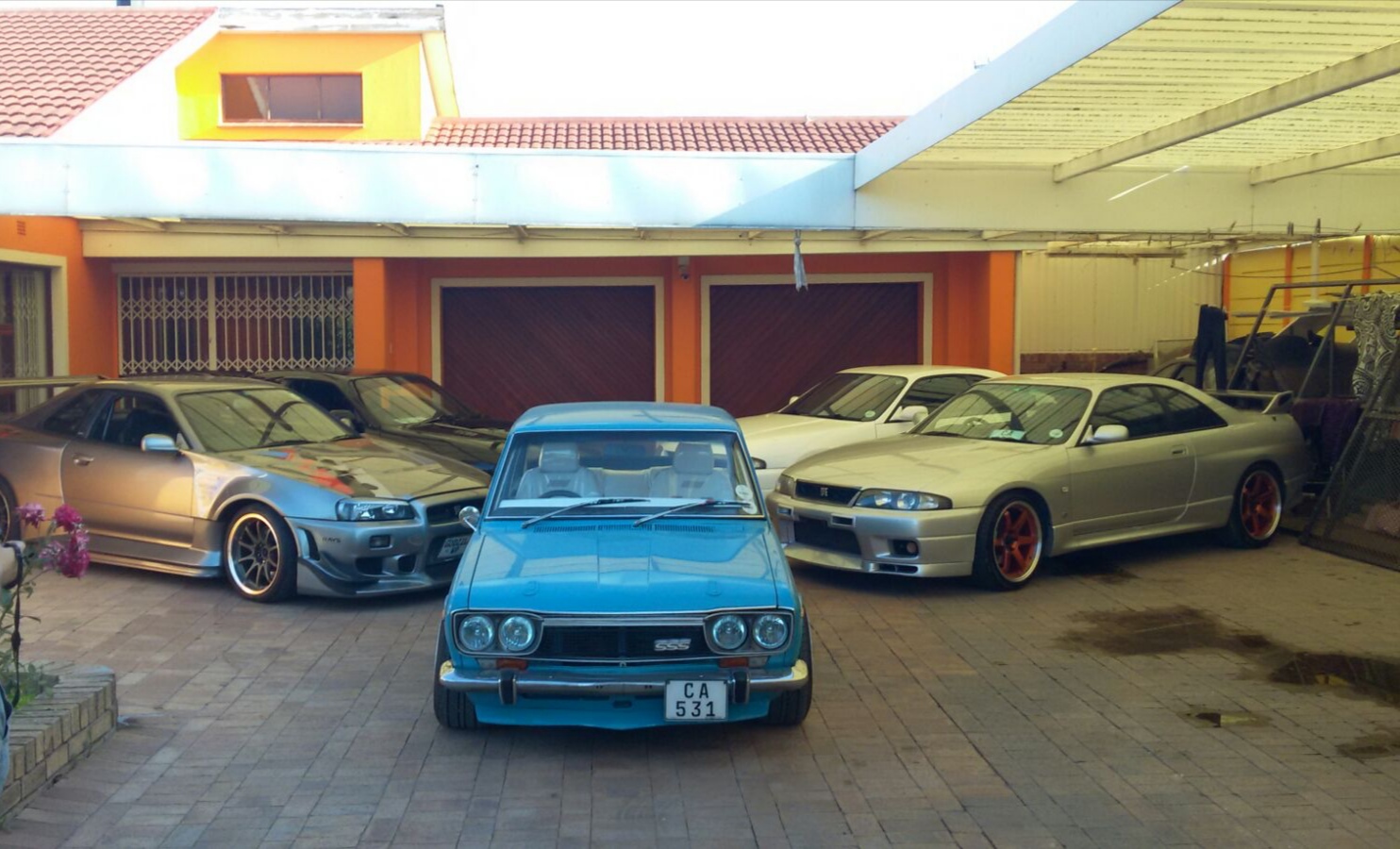