The Indonesian custom car scene has a saying: the best stanced cars come from Jogjakarta. These aren’t your typical stance builds, as here in Indonesia the scene is heavily influenced by Japanese bippu (VIP) style, hence the local catchphrase ‘Made in Jogja’.

Late last year I travelled to Jakarta for The Elite Showcase, but before seeing what this major Indonesian stance show had to offer, a friend invited to me to spend a few days in Jogjakarta where I could take a behind-the-scenes look at how local cars are built.

What I saw shocked me.

Laris Understeel is a well-known stance specialist in Indonesia. The shop’s reputation has been built on some amazingly clean builds, but what’s even more amazing than their cars is where and how they create them.

As you’ll clearly see from these images, the guys at Laris Understeel work in challenging conditions. The floor is mostly dirt and rocks, and wherever I looked there were parts.

Even the most basic of workshop equipment that most people take for granted is a luxury here, and as such many of the cars being worked on were sitting on piles of bricks and wooden blocks.

But it’s not just fitting suspension kits, most of the work requires custom solutions, meaning everything from the fabrication of suspension arms to bodywork and paint is handled in house. And let’s not forgot the performance upgrades either.

They even do custom carbon fiber.

Most of the cars I’ve photographed before have come from this very shop, and I had no idea. That’s really testament to what Laris Understeel can achieve given the circumstances they’re faced with. It’s a mix of talent and hard work, which is what the ‘Made In Jogja’ ethos is all about.

Stay tuned for ‘A Long Road To The Elite Showcase’. 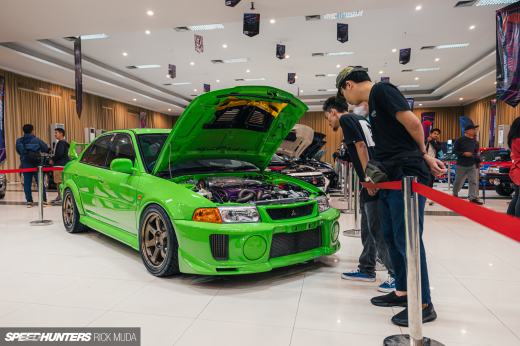 and this is how your fancy show cars are made <3 in propper car enthusiast shed!

Now that's how you make a proper fancy car!

It's pretty amazing what these shops can turn out given their very basic tools, and dirt-floor environments. You see shops like this all over South East Asia in places like Malaysia and Thailand. Generally the workers have no formal qualifications but are incredibly talented, usually working with no safety gear and just wearing flip flops.

I could never understand how people could do heavy automotive work in shorts and flip flops.

I suppose it's better than those 10-year-old kids in Bangladesh who cut up rusty old oil tankers barefoot, but only just.

I know nothing makes me feel good like the idea of doing an engine swap and having 600 lbs of aluminum and steel swaying gently from a chain over what are basically my bare feet.

No thanks. I firmly believe that safety is a matter of perspective and yet I won't work on cars without steel-toed boots, long pants and protective glasses.

Great article and definitely an eye-opener for those who weren't aware of these shops. These guys are the most creative because, as was mentioned in the article, the things we take for granted are a luxury to them. Although I do agree with the comment about the conditions it doesn't take much to have a clean working space and be a little bit organized. In fact I would think it would be more common for them to build custom tools, a functional workbench or storage rack seeing the workmanship and creativeness they have with the cars.
One has to wonder what the clientele is for these builds. I would almost think that cars like these would be considered extreme baller status there.
Can you imagine working with very few environmental restrictions, if any?... now that would be awesome...

That place looks like a scene out of Fallout! Love it.

That place looks like a shithole. Why not spend a week just cleaning? Would make work way more efficient.

Yea, there is no excuse for the mess. Take pride in your shop and clean up ffs. And are jack stands made out of gold over there? Unless these dudes are getting paid in rocks and dirt, for the types of cars they work on they should be able to have some money to invest in their shop.

that's what I was thinking. dirt floors may be unavoidable but sloppy piles of shit everywhere is just lazy.

I think us westerners can never really understand the South East Asian state of mind. We are used to adapting and organizing our surroundings for us whereas in there chaos is the norm, stuff just happen and people adapt.

I'm from South East Asia and I have a shop. Its just laziness to keep a shop in such disarray. If the owner took pride in his and his people's work he would keep his shop organized despite having a dusty work floor. He should model the behavior for his people to follow. If the boss allows it, the people will think its fine.

If you think I'm westernized in my views and are bashing my own culture, stop being lazy as well. Hold yourselves to a higher standard. If you don't, no one will.

While I understand the challenges of living in a third world country (Philippines), where labor charges are no where near westernized cultures, you cannot expect your 3rd world shop to have the same level of assets as a westernized shop. However its no excuse to keep it dirty and in unorganized. Its a reflection of the tone set by the boss.

I think I'd have a pretty hard time to leave my car in a shop like this.... all the respect to the guys working there and what the do with minimal tools but still, a little bit more organisation and a concreat floor woulnt hurt

I can't see your point of view but I am assuming you have never been to Indonesia.

I havent indeed. Only seen european garages and those are usualy quite tidy and well equiped. Even the most basic shops have a bridge at least

To think I bitch about not having a half hight lift in my garage to change my oil and do minor stuff. But yeah bricks and stuff is pretty shifty.

In all seriousness, we need to find ways to get people like this into public office the world over.

If they're so dedicated to cars that they'll work in OSHA Hell to satisfy their passion, imagine what sorts of laws they'd repeal if given political power.

I'd damn sure vote for a guy who's sole qualification for office is that he made an entire engine block out of JB Weld and Gorilla Glue if he promised to get rid of car inspections.

I need to know the story of this E90 M3 with a base 3 series front and Brembo kit.

Thank you for this eye-opening article.

Ive seen public toilets in africa that were cleaner.

I think it's all a matter of perspective and mentality.
You can work on a dirty floor full of rocks, parts and other obstacles, or you can clean it up. You can put 60k$+ car on bricks and fit custom-made carbon fiber, or you can weld together a basic jack stand instead.
These guys just don't give a shit, that's all. They do care to get stuff done, and props to them on that, but their surroundings are their tertiary priority.

If I left my hard earned pride and joy at a shop to get work done I'd expect them to respect it a bit more than just propping it up on bricks and bits of wood.

Looking at the expensive and fairly new customer cars, is this shop an example of rich Indonesians exploiting the poor (but extremely talented) ones by paying them pennies to work on their cars??