“Ron, would you like to visit the shop known for creating six- and eight-wheel vehicles from scratch?”

On my recent trip to Jakarta for Black Auto Battle, Audi, one of the event judges, knew that I really wanted to sink my teeth into the extreme side of Indonesian car culture. It came with a warning, though: “Many locals believe that Kupu-Kupu Malam [a well known custom vehicle builder in Indonesia] uses mythical powers to help them create their cars. People have seen and heard strange things at the garage…”

I knew this was going to be one of the craziest garages I had ever visited, but with the addition of spiritual entities thrown into the mix, it elevated things to a whole new level. Mentally prepared, we headed deep inside Yogyakarta, and soon enough had found our way to Kupu-Kupu Malam.

It’s abundantly clear that this isn’t the sort of company only interested in its bottom line. The staff at have a true passion for creating automotive art.

In terms of physical size and what I’ve become accustomed to in Japan, the workshop is huge. A variety of creations in various stages of completion were parked up around the place, patiently waiting for their chance to be reimagined.

They don’t have to wait long though, as the team at Kupu-Kupu Malam have developed a formula to churn out a 100% original piece in around eight months.

When you think about the types of customization going on in a lot of these builds, maybe the locals were right about spiritual assistance…

Nothing is off limits – if you can dream it, there’s a good chance Kupu-Kupu Malam can build it – but not all the work undertaken here is crazy customization. Full restorations and smaller scale modifications are also handled in house.

For example, this supercharged Honda S2000 is in the middle of having all of its exterior panels replaced with carbon fiber equivalents.

Kupu-Kupu Malam even worked alongside the Indonesian government to create the country’s first homegrown electric vehicle.

The Selo’s maiden voyage consisted of driving from Yogyakarta to Jakarta – a distance of 800 kilometers (a little under 500 miles).

The bizarre six- and eight-wheel show-stoppers that brought me to this workshop in the first place sit at the front of entire operation.

Ironically, these two cars weren’t created in attempts to win trophies – which they have – but just for the sake of creative expression. When others build to conquer specific categories, Kupu-Kupu Malam build for the art value.

Audi told me that it was originally six-wheeled, but the owners wanted to keep evolving it so decided to add another axle.

In terms of functionality, it’s the six-wheel creation that reigns supreme, with a supercharged Chevy big block V8 up front sending power to the rearmost pair of wheels.

Retro styling blends with futuristic elements all throughout the vehicle. It may not be to everyone’s taste, but the amount of customization and effort gone into creating this has to be celebrated – especially when you consider that it started life as a 1968 Chevrolet Deluxe.

This is, without a shadow of a doubt, the most extreme car I have ever laid eyes on. How about you?

Seriously bonkers. Even crazier that it's based of a yaris chassis hahaha I wanna see those things rolling on the streets

If Hotwheels had a manufacturing plant for 1:1 scale vehicles, this would be it.

Whilst some of the builds are questionable, that's up to the owners decision. The thing you've got to tip your hat off to is the craftsmanship.

Many readers will remember Lipu/Leepu from Chop Shop London Garage, and the ridiculous "one off masterpieces" he made. These actually look good. I mean, as a kid, if I was to see that 6 or 8 wheel car going down the road, or at a show, I'd lose my shit. Literally.

It's about pushing the boundaries, and sometimes vehicles can be art pieces. Look at the Cali LowRider scene. You want art, you look at some of the detail that goes into those cars. They're just beautiful

Whilst I lean way towards JDM/Euro, time attack, stripped out racecars, , restomod and hillclimb machines, I can only appreciate the hours gone into creating some of these vehicles

It's nice to see that there are still some garages around the world that aren't afraid to experiment with designs. That EV itself looks better than many other attempts from much larger, and possibly higher funded manufacturers or independent workshops.

Great pictures, lovely article, and apologies for the essay

It just really sparked a time of back when creativity poured into cars. Yes, simplicity is key, but now and then (and not to a ricey extent. Don't get it confused), it's nice to see something different!

No picture of the orange Karmann Ghia behind the 8 wheeled monstrosity ?

For something homemade and from scratch, this is bonkers!
I mean really this is something very good!

As locals..i can say..Kupu2 malam is the most well known custom car workshop in indonesia... they have been winning thropies since mid 00s... the golden age of crazy builds and bodykits Imo...

Liked the article but please give the 6 and 8 wheelers an article each.
Too fantastic not to.

Am I the only one that saw “Cat Oven”?

Cat oven is paint both, cat is means paint and oven is something like micovawe. Cat oven refers to the way a car or something else which are paint in a both or sterile room (oven) in order to get the maximum quality of painting. 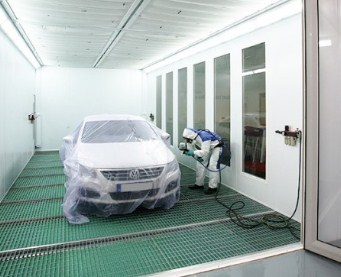 I gotta say this is pretty wild, especially given where this shop is located. The multi wheel cars look like the final boss of some insane video game from the 90s. Really unbelievable work. Even if it isn't your thing you have to give respect for the fabrication and the fact that damn thing started as a Yaris. haha this one is something else guys. Sick!

Ohhhh "Manta - Der Film" comes to mind with those 6 sets of wheels!

THAT 8-Wheeler... first time a real car looked crazier than Hot Wheels.
At first I thought it was some silly photoshop-ed until I realized that IT'S FREAKING REAL.
Now THAT'S CUSTOMIZATION TO A WHOLE NEW LEVEL.