Ducati describes its Scrambler as “the essence of motorcycling and a world filled with freedom, joy and self-expression.” It’s a pretty cool bike in stock form, but self-expression is the perfect term for what’s been done to this example.

Race! is known for building some of the best custom motorcycles in South Africa, so when a customer wanted to turn his 800cc Ducati Scrambler Classic into a one-off creation, they immediately took up the challenge. The result is this – the ‘Cortado Racer’.

According to Wikipedia, the word ‘cortado’ “is the past participle of the Spanish verb cortar (to cut), in the sense of ‘dilute’, and can refer variously to either coffee or espresso drinks throughout Spain, Portugal and Cuba.”

This is quite an apt term for this project, as it’s a really strong build that’s literally been cut, a custom chop at the rear decreasing the overall length of the bike.

After the bike had been stripped back to bare metal and the custom chassis work was completed, a stunning off-white and beige two-tone paint finish was applied. Copper striping in key areas was then added, along with some custom decals.

Special mention needs to be made of the custom leather work, which incorporates the Ducati logo on both sides of the fuel tank and diamond stitching which follows onto the seat.

Around the rear of the bike, the section containing the mudguard, light and numberplate holder was removed to give the bike a much cleaner and sleeker look. A new curved clear LED rear light was fitted, while a compact number plate holder was installed on the left side of the rear tyre, though it rarely has a plate attached to it.

The Rizoma catalogue was fully raided for this build. There are tiny little bottom mount mirrors, black billet aluminium grips, billet brake and clutch levers, gear shift, sprocket cover, footrests, front indicators and just about every other Rizoma option for this bike you can think of.

The wire wheels were also reimagined with black spokes, while the mounting connectors were finished in gold. And check out those brake discs.

The last piece of the puzzle came with a louder, better-looking and partially heat-wrapped titanium Arrow exhaust system.

Have a listen for yourself.

Race!’s Cortado Racer is a great example of talented people turning something decent into something ultra-cool. The café racer style of bike building is something I don’t see going out of fashion anytime soon. 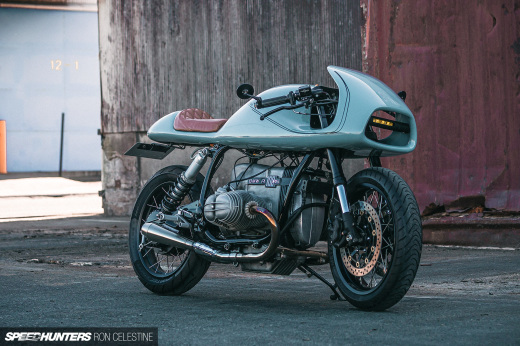 A Biased Take On The Baddest Harley Bobber

FWIW the spokes "mounting connectors" are called nipples in the wheel building language. Motorcycles ones are typically steel or stainless steel. These ones are probably nickel galvanized steel that gives that golden look.

Also Cortado is a café con leche, similar to an italian caffè Latte which in this build probably refer to the colors of the bike. In some parts of spain like in andalucia there can be 10 different names for mixes of coffee + milk depending on the ratio which is quite complicated to foreigner. And it can be quite funny to see someone from Málaga trying to order and find a way to express how he wants his coffee when he is in a foreign country.

Amazing! Anyone, who looks at a manufacturer's finished product as a starting point for their own creativity, is a true innovator.

Not only is the bike nicely done so is this feature. As a car fan turned motorcycle enthusiast, I really like the bike features. I’d love to see more here on speedhunters. That said, any recommendations for other sites? Speed hunters is my go to for everything car related, and while they are trying to move into bikes, who else do you recommend? Looking for those who appreciate art and science with exceptional photography

bikeexif.com is great (a bit too highbrow sometimes, but hey), pipeburn.com is a good one. I'd recommand meta mag too (they produce great content along with amazing video edits)

Wow, this bike is aesthetic af