As we know, if there is a car culture in existence where you are, then there will certainly be a cars and coffee type event to come with it. As it turns out, Saudi Arabia is no exception to this.

Unfortunately for me, my delayed flight at London’s insult of an airport caused me to miss the opening event of the Global Auto Salon, but luckily, my buddy Danny Phantom had a bit of a better experience and managed to make the connecting flight to Riyadh in time. From our discussion, it was quite the extravaganza as well.

I wanted to be there personally to get a solid grasp of the local car culture, as I firmly believe cars and coffee events surpass what any show can deliver in terms of culture authenticity. But I think I can make do with the photos Danny managed to snap, plus he gave me the lowdown on how the event went after I arrived later in the day.

The first thing Danny noted was that the Saudis absolutely love American domestics. And judging by the extraordinary turnout of Chevy, Ford, and Mopar cars and trucks at the event, I couldn’t argue against it.

It’s interesting to think about, because here in California, we almost cringe when the domestic guys show up (the newer domestic cars, that is). They tend to have a negative wrap associated with them due to often tasteless modifications, and an odd desire to attract attention towards themselves by being obnoxious in various forms. But as the saying goes, you always want what you can’t have.

That’s not to say American domestic cars are hard to come by in Saudi Arabia, because we can clearly see they are damn near everywhere. But one of the locals mentioned that the high-dollar performance cars are a bit of an obstacle to obtain. That’s mostly due to the limited supply exported to the country from the States, which I can understand. But that makes me wonder why I didn’t see more European cars around, as they would be the ideal choice since they come from neighboring countries. For the most part, everything we came across on the street was either Japanese or Korean, which again would impose a higher import tax. Confused, I stopped questioning it and just accepted it for what it was.

That was, until I came across these photos of a lifted Mustang, and whatever this paper mache creation is. Though I was confused again, I guess I can understand the usefulness of the Mustang in or around the desert. But I’m not so sure I can say the same about the makeshift supercar thing. I’d like some input from you guys on this one, what do you think it is underneath?

Poking fun aside, the overall turnout of the event looked to be quite fun and diverse. And I loved the fact that the locals happened to bring their own small kitchen to provide Arabic coffee for everyone.

For those that don’t know, take a glance at the images above and you’ll see the traditional way of serving coffee. It’s far more intimate than the American idea of cars and coffee, as it requires you to sit down, have a conversation with whoever is serving you, and truly indulge in the experience and presence of friends and enthusiasts.

But before we wrap this coverage, I have to make it point to speak a little about my favorite car. I was already excited to see that there was actually a lowrider in attendance, but what really made it unique was that it wasn’t just any traditional lowrider. Instead, it seems as though the owner took the general concept of what a lowrider is supposed to be, and added his own personal flavor to the mix.

Looking at it from a far, you’ll notice the typical custom paint job and small-diameter wire wheels with white walls and hydraulics, but investigating further into the details, you’ll see that the airbrush work on the car reflects men in traditional Arabic clothing, notably the keffiyeh (male headwear). I’ve seen other parts of the world embracing the lowrider culture, so this isn’t the first time the lowrider scene is shown outside of California, but I don’t think I would’ve ever expected to see it in the Middle East of all places. Just imagine, you see this thing roll up, and the guy that gets out isn’t dressed in typical lowrider attire, but instead is wearing his thawb (mens robe), and proceeds to let his pet cheetah loose while making his stroll through the event. It’d be pretty epic to say the least.

Needless to say, the opening event of the Global Auto Salon in Riyadh was pretty awesome. A diverse mix of cars, an enthusiastic and welcoming group of people, and most importantly, an introduction to what we should expect from the main event that would take place throughout the course of the next few days. More on that coming up soon.

More stories from the Middle East on Speedhunters 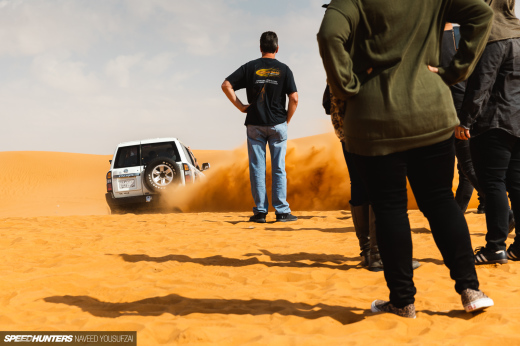 Interesting stuff. I'm going to go for an MR2 underneath the makeshift supercar (looks like it's still a work in progress to be fair).

Would never have expected to find a SP2 in Saudi Arabia. Nice to see our cars being appreciated throughout the world.

Saudi Arabia has an amazing car culture
It is very diverse

Danny Phantom is a great cartoon, what a great username for a subtle reference to a great show.


Great cars, great article, much love from the east coast. About to do some sick parking lot donuts and skids. Now thats its winter (its like PVC drifting in japan without the PVC)

Funny.... I don’t see any women around. Maybe its because women don’t have the right to go to one of these gatherings on their own in Saudi Arabia. I really hope this comment is not deleted. ... Women should have equal rights, including the right to modify a car or turn a wrench. Guys, let’s stand up for all the ladies who deserve the right to be hot rodders.

@pat, I wont delete your comment, but only because I want to make it clear that this is not a political opinion forum. This is an online magazine, sharing an experience that was had in a region that is not so popular in terms of car culture. As mentioned in one of the previous articles, we are "global car culture". We will not exclude any part of the world over political disagreements to what some people "believe" is wrong or right. lastly, there were plenty of happy women there, this event included, and you will see that with further coverage coming. No is being forced to read through, or see this coverage. If you don't like it, or anyone else for that matter, then I am sorry you feel that way, and I wish you a happy day moving forward. You can skip through my next 2 stories if that makes you or anyone feel better. All that being said, I will not tolerate irrelevant political comments on my coverage, so best to keep your opinions that are non automotive related to yourself.

The intense heat of Saudi Arabia must take it's toll on these cars, especially the plastic and rubber outer panels. How do they compensate for that?

Wow this looks so awesome!! Thank you so much for sharing this.

I like the look of that boxy white one. Don’t know what is underneath but it looks cool.

I also like that you would sit down and have a conversation and coffee with someone as opposed to grab a quick coffee, snap a photo and move on.