If there’s anything I’ve learned from SEMA this year, it’s that the best place to enjoy the event is from the comfort of my own home, some 5,000 miles away.

Okay, maybe I’m a little bit jealous of our own Team Brexit enjoying the Nevada sunshine, the neon lights and the general positive vibes of Sin City, but I don’t envy the mammoth effort required just to get around the show while trying to identify the cars which need to be captured and shared.

Factor in a healthy dose of jet lag, and the rain outside my window doesn’t feel so bad after all.

I do think the best way to document SEMA is to cast as large a net as possible. It’s pointless to become fixated on one or two builds at the expense of the rest, as there’s nearly always something just as, or even more exciting around the corner. SEMA rewards graft.

Mark must be of the same opinion, as this gallery of engine bays from the Las Vegas Convention Center covers pretty much every major engine layout you can think of: vees, inlines, flat-fours, turbocharged, supercharged, naturally aspirated and even spinning triangles.

By presenting such a wide variety of applications, it also allows us to gauge what you’re most interested in, so we can chase them up at a later date. I’ve definitely spent longer looking through these photographs than writing the short pieces of copy which accompany this gallery (quelle surprise I hear you say), but there’s definitely more than one in here that I want to know much, much more about.

For starters, there’s this billet 26B with two huge turbochargers mounted either side in an AWD FD3S RX-7. How can you not want to know more?

Then there’s this humble looking Honda B-series in an ’85 Civic. Although there’s not much humble about a 240whp B16B on ITBs.

There appears to be more motor than car in this 1973 BMW 2002, which is fitted with a single-turbo-equipped S55. Ryan was quick to point out that they’ve done away with the top-mount charger cooler and made a V-shaped cooling pack at the front instead.

But what about the longitudinally-mounted K-series engine in that Civic Si? There’s also the GReddy-equipped B58 along with the red Camaro drag car with an LSX Tall Deck and a not-so-small 106mm Garrett turbocharger hanging off the front. There’s some big superchargers on display too, along with some exquisite bay work and velocity stacks glinting under the lights. There’s definitely a lot of engine bays here that reflect the excesses of Las Vegas, but I see nothing wrong with that.

The more I see from SEMA this year, the more questions I have. Maybe being there isn’t the worst thing?

The SEMA Show on Speedhunters 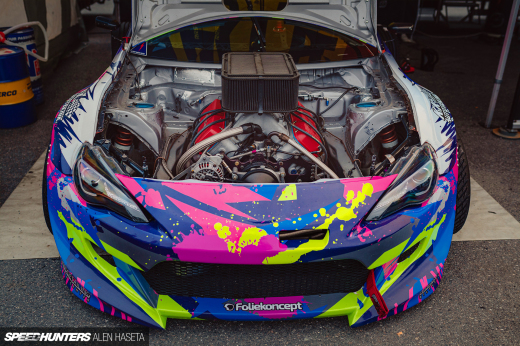 I finally understand the name “baywatch”

I like that this article is right next to the "Knowing When To Stop" article.

Let it never be said, that Speedhunters isn't about variety!

that 1973 BMW needs a spotlight

Wait what? There were two billet 26b 4wd FC3S at SEMA?

somebody giving rob dahm a run for his money.

Gambit - there's a wealth of infomation here on the site: http://www.speedhunters.com/tag/photography-guide/

I'd recomend checking these stories out, and I am sure some of our photographers will give you some tips on the type of camera that might be good to get started.

If you are serious about getting better for short money you can grab a photography book from the library, get a used SLR 35mm film camera, buy a few rolls of film and start going through the lessons. You certainly dont get the instant feedback of digital but you can get fantastic quality images for 50 cents a shot. run some black and white, try different brands of film, look into buying lenses. it's not as easy as throwing down a grand or so for a new chunk of digital kit but the pictures you take will feel more special and you will take more time in the setup because the releasing shutter costs you a little. Craigslist here has at least a dozen old SLR cameras for less than 100 bucks, film costs a couple bucks a roll, processing is cheap. do a quick search on good used SLR cameras and take a gamble.

I 100% disagree with what aaron has said here. Film cameras are cheap on the front end, but have a lot of cost on the back end if you are shooting a lot. With film and processing, you are looking at about $15-20 per roll for 36 shots...You can pick up any Canon Rebel off craigslist for less than $200 and start shooting. That's what I would do. After the initial cost, you are only really spending money to upgrade stuff from there.

Don't get me wrong, shooting film is great (and I do shoot film thru an AE-1 Program), but it's not cheap at all in the long run. It's way easier learn from your mistakes with digital too as you can review your settings and see why the shot didn't come out the way you want.

I thought only bro-dozers had Bluetooth driveshafts @ SEMA???
Going by the pics that 'AWD' RX7 certainly looks to have a set of these rare shafts in the front Paddy

And it looks fuggglyyyy with those wheels and off-road ride height.

Just another bull***t 'gram car to gain followers and impress 12-year-olds at SEMA.

But you'd have finished the car in time no problem, right, twist?

If argumentum ad hominem is the most You can come up with, should I really reply?

At least look up the definition of 'big words' before attempting to use them for the first time. It should be obvious that my jab was directly related to what you were attacking. Please, do go on about how an unfinished car is such an oddity at SEMA, an event infamous for last-minute builds. It's not so much a car show as a place for vendors and shops to show off their products, skills, and services, inviting potential customers to buy them. It's right there in the acronym. By putting that car in the event, even in a not-quite-finished state, they're only saying, "if you have an FD and are interested in this swap and drivetrain conversion, come to us, we can do it for you." Plumbing and wiring aren't difficult to figure out these days with all the standalone ECU options available to us. Given that four-rotor swaps have been done already, I'd imagine that its main purpose was to show off their billet rotor housings. Maybe that AWD conversion as well, but there are a handful of shops out there by now that will make you custom axles.

Actually there's some pretty clever engineering gone into that drivetrain with C7 Corvette control arms and spindles, midship Gallardo transaxle and custom torque tube.
The chassis work really is astounding, I'd say on par with or even more impressive than Dahm's with his big-buck catalog parts and a lack of basic knowledge about engineering.

With huge amounts of quality work gone into that car it's understandable to arrive with a semi-unfinished car. So I apologize to the owner for making harsh remarks.

Sadly the exterior doesn't do it for me, perhaps it's the 20-inch Vossens or weird fitment. I'm not a stance guy, but something seems way off. For getting attention though, (which i presume is the goal) it's spot on

Credit to the builder @subiesinglecab

It's also missing a radiator cap. Not everyone is a match for the "SEMA Crunch."

"number 5 is alive" ;0 that second last photo reminds me of that robot movie short circuit!

The '85 Civic is starting to roll out build details on RyWire's YouTube channel, for those interested. Beautiful chassis.

Ligit technical question:
Why do tuner exhaust fabricators weld many angle-cut segments of straight tubing together to form curves, instead of using preformed mandrel-bent tubing?
If performance is the goal (and not looks), I'd think the weld beads would increase turbulence & reduce overall exhaust flow.
Thanks!

It's mostly for looks (and to show off welding skills). Mandrel bent would have best flow, then this, then crush bent last. The welds shouldn't interrupt flow much on the inside of the piping as the cut pieces are welded from the outside and weld should not penetrate much to the inside.

Makes sense. Thanks for explaining.

Way too many nice ones there to see all of them! I thought mine looked okay too. 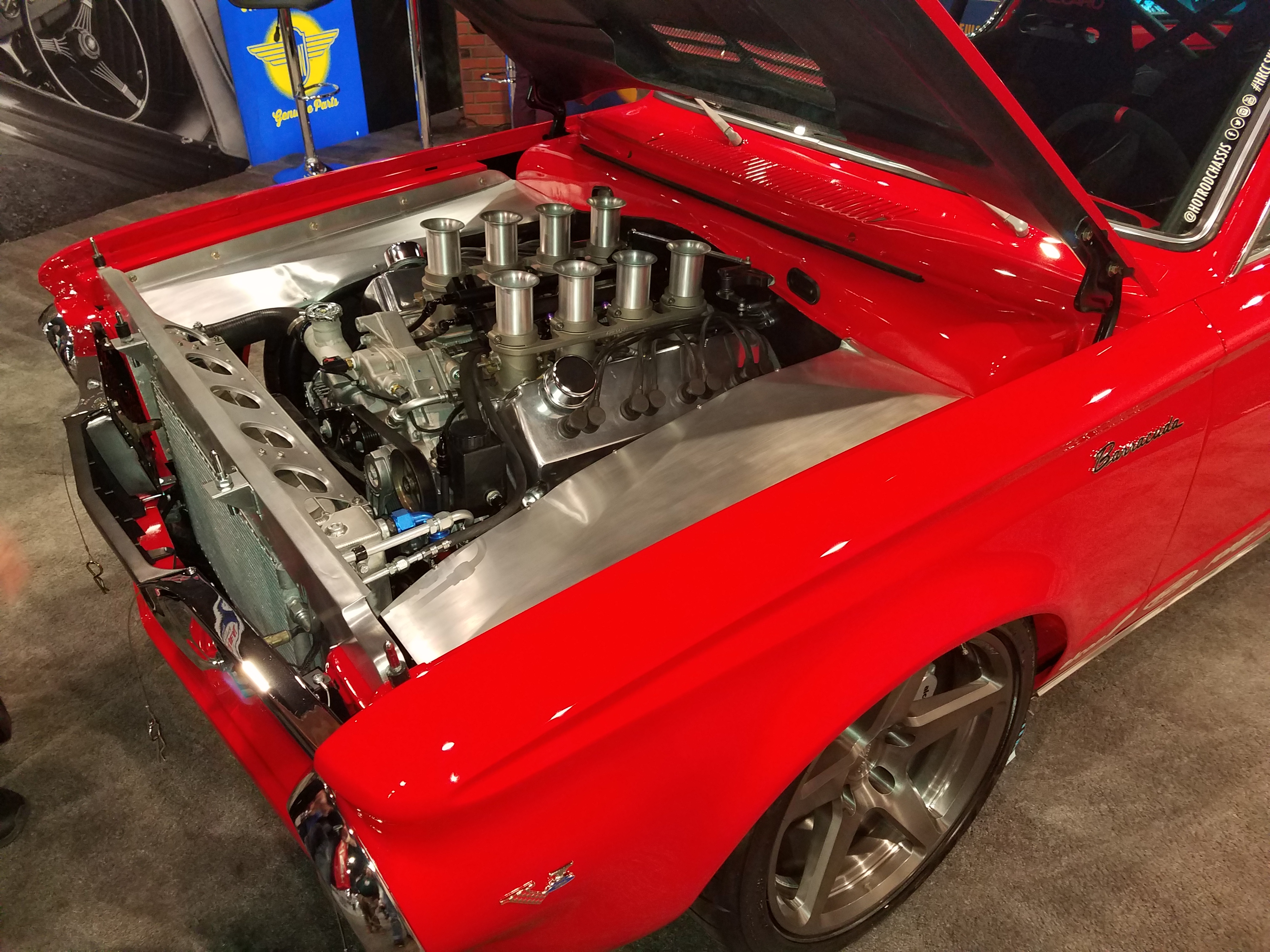 After looking at all these turbo cars, I've finally paid attention to how they're actually set up. What I've deduced is, I have failed in making sense of how a turbo system works.

How the hell does the expelled, or extra exhaust escape?

you sound like you have understood most of it. when the throttle closes when u let off the gas, all that pressurised air would normally back up against the throttle plate and eventually stall the turbo so the blow off valve either releases that excess air into the atmosphere or if it's recirculated back before the compressor so it just kinda loops. boost controllers work with the wastegate to regulate how much exhaust gas is spinning the turbine. If there was no boost controller the turbo would spin infinitely faster till it blew itself or the engine apart. the boost controller (at whatever the desired boost level) opens the wastegate which diverts exhaust gas around the turbine wheel and into the exhaust pipe or screamer pipes.
hope this helps

So if I see a cap on an intercooler like on the red car, it's that a water to air exchange variety? The other question is why do twins on a straight 6 vs. a bigger single? Seems like the turbo on the opposite side would get less pressure, or have more lag.

Thats a 4 rotor engine & seems the turbos are the same size, each one is probably being spun up by 2 rotors each..meaning they are running in parallel like you would see on a v6 or v8 engine so they would balance each other. And yes i think you're right about the intercooler being water to air

Okay. Each pair of rotors has their own exhaust manifold or header feeding their respective turbos?

I imagine so..cant say ive seen a setup done this way before..usually just one big turbo so am curious to see how its all packaged and piped

That makes two of us I guess! The fabrication appears to be impeccable.

Mine was the red Eg Civic with the hood exits. Thanks for the pics!

To me, it's like you got Rob Dahms RX7 and this Red RX3 mixed up, because that RX3 isn't AWD, but Rob's car is. No pic of Rob's car though. Just trying to help

Ok I've found it, yes the red thing is a 4wd fd3s with a 26b, it's ugly as sin and high as a kite. It uses a lambo transaxle and corvette suspension. Nowhere near as nice as Dahm's car

I made the cut. Last photo is my ae86 beams swap.

It always puts a smile on my face when I see tuners still rocking Honda's B-series engines. That's true dedication.