SHARE Liberty Walk’s GT Racer For The Street Has Arrived

When I visited Kato-san at Liberty Walk earlier this year to talk about NFS Heat, he was eager to show me a few renders of the new cars his company was working on.

On top of the vehicles he plans to debut at the 2020 Tokyo Auto Salon in January next year, Kato went into some detail about the Lamborghini Huracán you see here.

While the now classic LB-Works over-fender approach continues to define Liberty Walk’s ever-growing line up of aftermarket aero kits, this year Kato-san introduced LB-Silhouette, which is a whole new approach.

Launched on the Ferrari 458 at TAS 2019, this new range is more like a total body conversion rather than well-contoured fender flares. It’s another step up altogether, a true restyling of the base vehicle.

And spearheading Liberty’s attack on SEMA this year is the LB-Silhouette version of the Lamborghini Huracán, which we shared renders of back in July. Now it’s a real thing.

This conversion, which costs from US$39,000 to as much as US$60,000 (depending on materials chosen), visually transforms what your baby Lambo looks like.

Design-wise, the best way to describe it is a Japanese interpretation of a Super Trofeo racer for the street. It still retains the visual impact that rear box fenders synonymous with the works-look bring, but the rear spoiler treatment with the fin running along the center of the louvered engine cover is the detail that caught my eye first.

It will be cool to see this conversion at SEMA in a couple of weeks’ time interpreted in various flavours, but for now I am interested in what you guys think of it all.

Is this the direction you like seeing Liberty Walk go towards, or is the LB-Works over-fender approach still king? 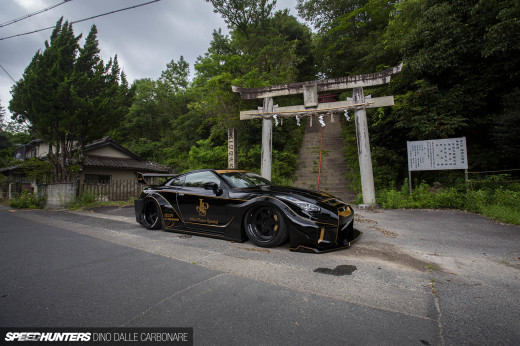 I'm not normally a fan of this guy's work, but this is very appealing. Reminds me of the NSX Mugen RR. I love it.

Oh my! Yes please. This is really the way to go. As a fan of smooth transitions on bodywork I’m glad the race car style bodywork may become an actual thing instead of rivited fenders.

seems Liberty Walk has tired of trying to offend, and now prefers to focus on making handsome cars instead!

LOL! This is a new line of kit. The "offensive" kits will continue to come.

haha no doubt. I don't like their usual kits but I appreciate that they are pioneers of that look. I think this is a great evolution of their style.

LOVE IT!! I wish I could afford for them to finish my custom 240sx widebody

For Sale: One Kidney.

What I'm wondering though: For that kind of money you would assume you also get wind tunnel testing and aero numbers? But then again: no ajustable aero to speak of? So that isn't likely is it? Especially with a high drag front end. It's all the little things which makes it seem like a tropheo, but it not being up to par with one from en aerodinamic standpoint.

More drag, les efficient cooling, bigger frontal area. To me this is more something allong the lines of: "I want something to look like a GT car, but I actually don't understand what makes a GT car work". Or in Short: A poser mobile....

Lol, I think you meant "aerodynamic"

On that note, I'm interested in seeing what would happen if the owner were to drive this thing around a track at speed. I think its aero looks *much* less dubious now than it did in the prior version.

Appearance-wise, I want to see this at a usable ride height, because its awesomely-racecar visual impact is diminished by its lack of purposeful stance. I think the design is awesome, nothing short of it.

From what i can see and know because of my line of work: The tropheo actually has a more rounded of front section, lessening total frontal area. It has a much smaller grill on the trofeo leading to less drag. And more downforce because of a better designed splitter.

The one thing that gets me the most though is the ducting. The trofeo has leading ridges. This kit doesn't. Those leading edges actually serve the purpose of creating a low pressure region below the ridge. Thats where the duct is, so it helps flow.

This kit doesn't have those ridges. Therefore the ducts create extra drag. But because the ducts now opperste in a high pressure area, they will actually flow backwards at speed, hurting cooling.

Thats why Dallara is involved with the trofeo....

Now I see what you mean. From the perspective of someone who knows very little about these things, my first thought was, "That looks like a Performante front splitter, if one were cut in half. I wonder if the designer knows that you need the whole thing..."

It's easy to visualize why the vents would end up deflecting air, here, instead of allowing it to flow through the body. I say "visualize" because the airflow can be mocked up in Solidworks by a fool like me.

Hopefully those who buy the kit will refine it, Dallara-style. Neon underglow is probably more likely, however...
I don't think aerodynamics are very important on a car made to slide, that will likely never see more than 70-80mph. IMO, you take on a certain responsibility to "do it right" when making a kit for a car this capable.

The issue is that you need a low pressure area downstream of a high pressure area. Nobody commenting here knows how the ducting is run, nor where the low pressure areas reside. It could be well designed with wind tunnel testing, or it could simply be cosmetic. Guessing and judging based on these pictures, or based on aero that you have seen on racecars is kind of pointless.

First things first: Only the botom plate is a splitter. Not the spoiler-ish kind of deal that on top of that. A splitter if done right, is kind of free downforce without large amounts of drag asosiated with it. The spoiler above it is all drag and just a design feature. It could have effect, but if that where the case it's only placed there as a balancing function.

Be carefull about visualising: Its not always a flow path you imagine. There is pressure and turbulence involved. especially with vents where air is passing through.

But lets face it: The things I mentioned earlier are just the simple things one can see visually without looking at data. With data it will stay the same or get worse, but it never improves.

As for drifting or slow speed driving: Of course they are still important: even at those speeds they play an important role. The influence handling above 50KPH and things like gas milage above that. making them work right on a car that is traveling sideways is a whole different matter though. not so much because there is no flow, because there is. But more so because flow is entering the car at a different angle.

This has to be the best widebody kit I have ever seen on the Huracan
We need this in NFS Heat!

When I get a Lamborghini Huracan, I'm definitely twin-turbocharging it and getting this Liberty Walk kid with some Work wheels

Truely another level! To the King!

i digg this , the wing aera needs some work , just dont know what its missing or how the angle should be etc .. but everything else seems to be on point .. ride height need to be up just a little with more meat for tyres..

Wow this thing is insane from every angle. Cant wait to see more from SEMA

I love this new approach. It's clean. Gundam-spec.

This looks beast. Wasn’t really fan of the bolted-on-overfenders look but this I like.

wow! Finally a lamborghini I can like. Feels like a GTA car. Libertywalk has done some great work in the past but this blows it out of the water, talk about a total transformation, wow! I feel like this could get me into supercars now and i can stop hating on them so much as of this very moment.