SHARE A Carbon-Clad Proton Satria Neo With A Twist

Over the past couple of months I’ve been doing a lot of travel in the pursuit of speed and car culture as a whole.

Jet-setting across the globe can be quite exhausting, but it’s something that I live for. I’m truly grateful for the opportunities, and even more so when travel is combined with a good cause. Drive4Paul Malaysia was exactly that.

If you haven’t heard of the Paul Walker memorial charity events before, don’t worry – they’re something I’ll go into full detail about in my upcoming Drive4Paul event coverage. But before I get into that, I want to highlight a few of the special cars that filled up the Bandar Malaysia venue last weekend, starting with an interesting Proton Satria Neo build.

Every time I come to Malaysia, I always want to try and find a local car – normally a Proton of some sort – that has been customized. While roaming through the sea of modified machinery at Drive4Paul, a good friend pointed out one build worthy of a closer look.

The owner, who simply goes by the name Narock, acquired the Neo as his first car over a decade ago. In the time since then he’s done a lot of customization, and that includes making many carbon fiber parts himself from scratch.

Having just tried my hand at composites by building a custom carbon air box for Project Rough, my interest was immediately piqued.

Like I have, Narock started off with small carbon fiber bits and pieces, but as his experience with the material has grown, so too has the complexity of his carbon projects. The basic shape of this custom carbon fiber rear bumper comes from the stock Satria Neo item, but Narock has added vents to give it a unique look.

The carbon bumper up front is a fusion between the original Proton item and that of a BMW M4, which Narock told me involved a lot of work. Maybe I should look at some mash-ups for my Skyline…

The custom composite treatment continues inside with a number of pieces formed from red carbon fiber.

Narock’s Satria was displayed at Drive4Paul with its hood up, and for good reason – the engine bay has received some serious love as well.

If you didn’t know what you were looking at, you’d be forgiven for thinking that the stock engine has been upgraded with – at a minimum – intake and exhaust modifications and some detailing, but there’s a lot more to it than that. In factory form, this Satria Neo’s engine was orientated with the intake at the rear of the engine bay and the exhaust at the front. Here it’s been twisted the other way around.

Narock’s thinking behind this, was that if he was able to have the intake on the front side of the engine rather than against the firewall, he’d be able to take full advantage of the air rushing in through the newly-designed front bumper. The upgrade was achieved by dipping into the Proton parts bin and custom-adapting Mitsubishi engine components from the previous generation Satria.

It may not be producing huge power, but the estimated 180hp being sent to the front wheels from the tuned engine is plenty for the lightweight hatchback.

The transformation of this Proton has taken over four years to get to this point, and it’s a brilliant example of Malaysian tuning. It definitely got my brain thinking about what I can do with Project Rough as well…

In the meantime though, stay tuned for more from Drive4Paul.

More Stories from Malaysia On Speedhunters

Drive4Paul: Making The World A Better Place, One Event At A Time 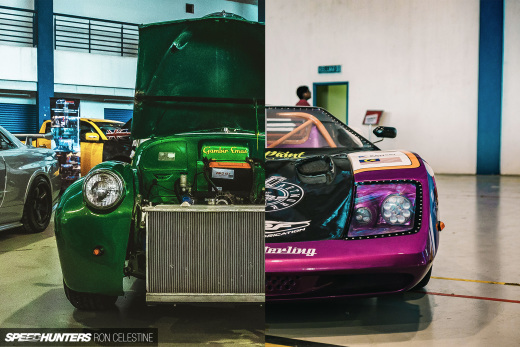 Finding The Weird & Wonderful In Malaysia

I own a CPS satria neo , best handle hatchback out there the best i loved this car since i got it , the speed was lacking but man this car on a good road reved out heaven , driving around in a ST 2019 and honestly feels num compared to a satria bring back the Satria neo

Just as information and to clarify for readers out there, Proton used to be Malaysia's national brand (Perusahaan Otomobil Nasional ( or National Automobile Company). . But today only the name is retained. Today it is owned by Geely 49.9% stake. Also, Proton top seller today is simply a rebadged vehicle from Geely.

I also got a satria neo as my first car (one of very few in Australia). Glad to see these mad little hatchbacks getting some love!

Sarawakian here. How'd...? Head-shakingly amazed by his nawaitu. Also interesting 2b hearing his stories with JPJ...

if i am not wrong, carbon parts like hood, fender, bumper are considered illegal by the road transportation dept in Malaysia. These parts are not tested, no crash worthiness nor safe for driving on public road.

Anyway, I like the creativity of blending proton and BMW design....

Hey from Wiki Lotus worked on the pronton? did Lotus work on any other fwd? and mitsubishi and some dedicated car nuts...... for a front drive road car rev happy = fun. I think I want to try one

Lotus was involved with development of the EcoTec series of engines for GM's FWD cars.

"Maybe I should look at some mash-ups for my Skyline…"

Lol obviously not the same.. be creative now

carbon goals there Ron...
this guy does a good job

I really like the idea of someone doing custom carbon work on something that's not normally modified. Its really unique what has been done with this Neo, especially the melding of two completely different manufacturers and styling cues. I like the idea of taking the BMW vents to make it more aggressive, while also forging the front bumper in full carbon to keep the weight down. I'm stuck on that front end because its one of the most unique pieces of kit i have seen this side of SpeedHunters.

Best of luck in your travels.

Are there any full view 3/4 shots with the hood down? I

Great work, looks like factory parts.. This guy should be work in europe or amerika and build his dreams from carbon! Or our dreams haha i need a tailgate for my BMW e39 touring, does he get the job done? ^^

Nice clean work! We need more guys like him!

He should seriously consider ITB for a intake upgrade. You can build a huge airbox and duct it straight to the front bumper for a 'ram-air' intake. They tend to make serious power. They used that a lot in BTCC cars.

what engine he use?