The best part of any car show is that air of mystery beforehand. You just don’t know what’s going to show up, and it really could be anything.

Well, actually, the best part is perusing the show and digging for those off-beat cars you were — or maybe weren’t — expecting to see. This being our first time to the All British Field Meet held at Portland International Raceway, Sara and I really didn’t know what to expect.

In terms of appreciating older British cars, I think we have a long way to go in the States. It’s probably due to the fact that most, if not nearly all, of their owners are just a bit beyond social media age. I think if they weren’t, we would see a lot more mainstream appreciation for these old roadsters and British cars that we tend to view as a novelty here, rather than a proper driving machine. When it comes to driving, I haven’t found myself behind the wheel of many British cars, and I think that’s true of most of my peers as well. A shame. Probably.

But at any rate, I’m sure you can imagine my excitement as I was strolling down a row of Minis, each different from the next, when I found something truly out of left field. Something that involved some serious bodywork I’d never seen on a Mini before.

Minis have been modified since the dawn of time, so it was no surprise to see a number of wildly modified examples at the show. From off-the-wall bodywork to period-appropriate additions; from a simple Honda swap to a race-bred Vauxhall transplant – there was a bit of everything in the Mini camp.

It’s just further proof that there really is no limit to the number of ways you can modify a Mini; all of which are correct, by the way.

Already a favorite in factory trim, this race-prepped Jaguar E-Type with six velocity stacks checked all the right boxes. I have driven a E-Type before, but it certainly wasn’t one like this.

Four, three, or two wheels, the All British Field Meet had you covered on just about all fronts. That is, as long as it was something British you were after.

The All British Field Meet on Speedhunters 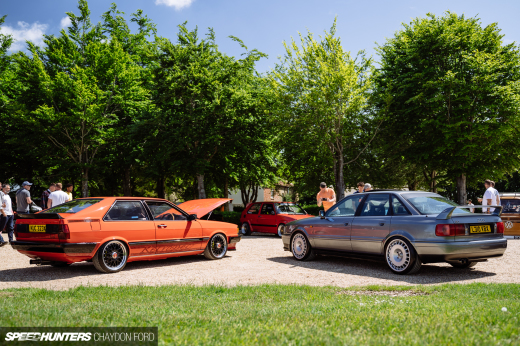 Good to see those Mini Marcos GT things look just as weird in real life as they do in Gran Turismo...

Its a Shame really that the Car industry is basically owned by other nations. Ah well, lets be nostalgic, and enjoy the great things we built. and the crazy things we built in garages in the UK.

Still weird to see that most people visiting this site don't know what they are looking at. The first picture for instance: That a 7 or 8 port head on that mini, which is quite rare. The bodykit on the Clubman estate is a Zeemax bodykit from back in the day.

Its a crossflow head. Not rare at all. You can buy one from Moss. Just uncommon as they are very expensive and in many race bodies, illegal.

For a mini it is. Ever orderder one? Backorders for months. Let alone on the second hand market, where they are non existant. Mini spares sells them, and I believe mini sport does to? But does that make them any less rare? Because you hardly see them at all.

Trevor, if you have an interest in fast mini's, I can thoroughly recommend the book 'Mini: The Racing Story' by John Baggott. full of interesting cars and an insight into a largely lost era of motorsport.

You can say that again!!!

Trevor, love the pictures! and if you're ever around the coastal Virginia area, and want to try out some open-top British motoring, I've got a Spitfire 1500 for you.

Wrong coast, but I'd take you up on that if I could! Thanks man, maybe one of these days...

What's the white car in the second to last photo?

Nice to see the Vauxhall-powered green Mini is still in a constant state of development. It been quite a while since I've seen that car, good to know its still plugging along.

Looks like a few BC boys were down there. Right on!

would really like to see you guys do a feature on gildred racing. they have a 500hp rear mounted supercharged V6 mini. The Super Cooper.
it's faster than a mclaren 675LT.
and they have a number of other interesting minis too.