Drifting is a sport that comes with real risk. It’s not a matter of if you’ll be involved in a crash, but when - that’s the nature of the beast.

Sometimes you get lucky and it’s only a love tap from another car that came in a bit hot, while other times it can be a little more serious…

Unfortunately for Manabu-san and his KE70 Corolla, the latter was experienced during SLY Summit’s grassroots drift event at Sportsland Yamanashi circuit last weekend.

As Manabu was coming around the final bend that leads to the small front straight, two other cars at the top of the hill had spun and come to a complete stop.

Flying up the hill, Manabu said he completely missed the yellow caution light flashing next to the pit lane entrance. To be fair, it would have been hard to see anything with so much sunlight flashing through the trees that surround the circuit.

By the time he realized that the cars on track were stationary, it was too late.

Fortunately no one was injured in the resulting accident, but as you can see in the images, both ends of Manabu’s KE70 didn’t fare well.

The real reason I wanted to share this story is because of Manabu’s positive attitude after the accident. Once he was over the initial shock of the crash and the fact that his KE70 was pretty much a write-off, I asked him what he was going to do now.

“The next event is in October so I’ll try to have it fixed by then, or I’ll re-shell it,” he said with a smile.

Manabu didn’t waste any time either; by the end of the day a random KE70 shell arrived at the circuit on the back of a flatbed. After confirming that the 4A-G engine and drivetrain was still salvageable, he had bought a replacement shell from a nearby seller and was already planning the swap.

When it’s your passion, you should never give up – even if you hit some objects along the way, just as Manabu-san did. What an absolute legend.

I bet I know what was going on in his head. I’ve been through the same exact thing

Was it, "Oh no! I knew I forgot to do something this morning! I could have saved 15% or more on my car insurance by switching to Geico!!"?

funny thing, Manabu's already got the donor car's front clip and rear stitched onto his car.
he's @Spirant032 on Instagram. It's been interesting to follow during the repair process.

Haha exactly! He doesn't play around does he

What a good sport! Much respect! 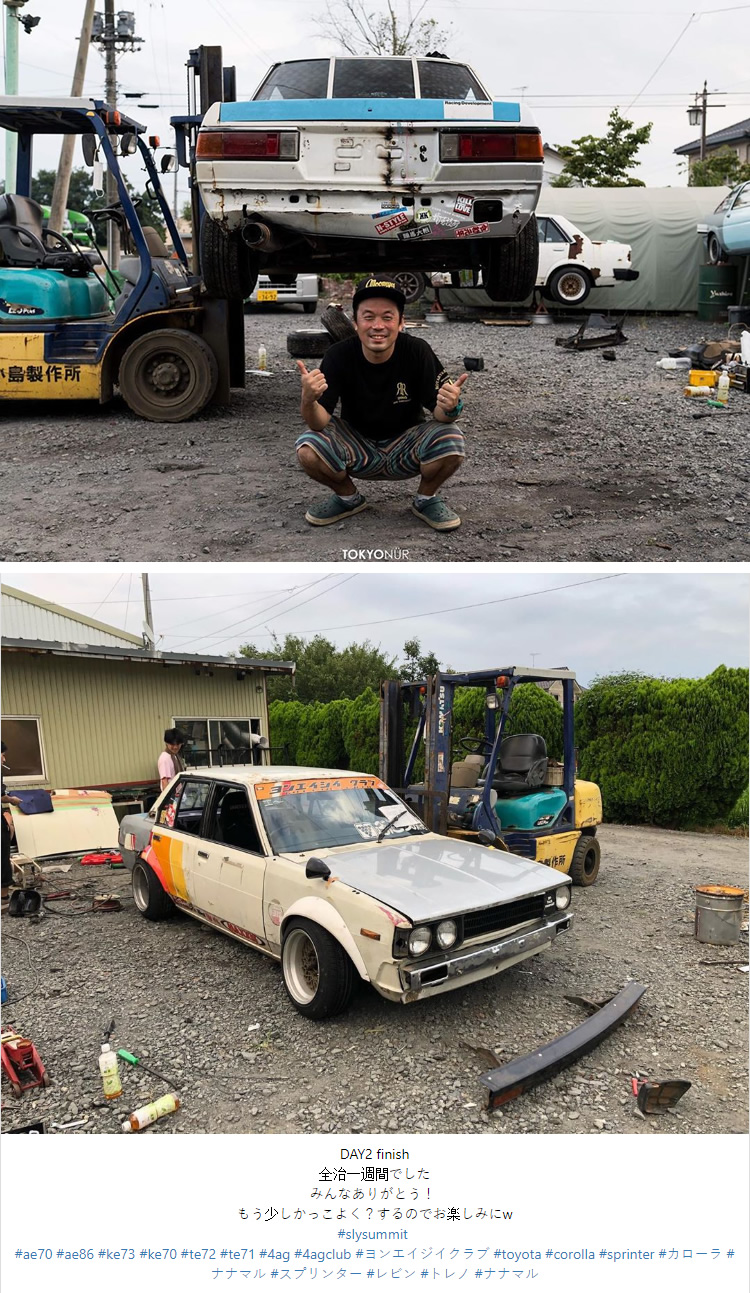 Haha was faster than I could get this out

Glad to see there are still KE70s around in Japan. Heard they are a near extinct species over there today.

Compared to Malaysia, they might as well be. But they are here ^^

Haha yeaaa. I didn't know he was going to go that route but I saw pics shortly after lol. Guess he figured that was the better approach

Christ, judging by the images here in the comments, I need this guy to come give me a kick up the arse with my datto xD

More of this. We getting back. Short and to the point

As Paddy said, definitely appreciate the feedback. Will def try to keep this theme going whenever possible !

Appreciate the feedback, Ricko. I know you're a regular, too, so it means something. I think Ron knocked it out of the park with this and the Hakosuka stories.

I love this new format!! Loving these random grassroots coverage.