SHARE The Ultimate AE86 Festival (That’s Not In Japan)

At a small race circuit in Kildare, Ireland (around 45 minutes from Dublin’s city centre) 210 AE86s gathered last weekend. It’s a significant number, as it’s almost certainly the largest gathering of AE86s outside of Japan, and there are whispers that it might have even been a larger gathering than anything ever held previously in Japan, too.

The problem is, no one has ever formally recorded an official number, so it remains unofficial for the time being. For perspective’s sake, a cursory glance on the search engines of the world wide web reveals a Toyota UK press release from 2015 where 13 AE86s assembled at Japfest that year, while the US-based 86FEST gathered 32 examples in 2013, but has been dominated by the new ZN6 (FR-S, GT86, BRZ) ever since. Similarly, an ’86 gathering in Japan earlier this year at Fuji Speedway was also inundated with the more recent model.

It’s a lot of fuss to make to for what was built as a humble, basic and affordable sports car back in 1983, but the legend of the Hachiroku is well documented both here on Speedhunters and across automotive media as a whole. Even the various AE86 sub-cultures have been explored in-depth, and it’s rare now to find an ’86 enthusiast who doesn’t have their flag nailed (metaphorically) to a particular model, be it Levin, Trueno, coupe or hatchback.

Then there’s the cars which share a lot with the AE86 both in spirit and in DNA. That simple lightweight, front-engined and rear-wheel drive recipe that’s all but impossible to beat from a driver’s perspective.

For a group of cars which all share the same chassis code, it’s impressive how much variety there is amongst them all. Okay, the ‘UK-spec’ cars all follow a similar and near identical recipe (I wonder has any owner ever tried to get into someone else’s car by mistake?). While this style isn’t for me, the cars are nearly always incredibly well cared for and mint in their condition.

It’s the Japanese variants that continue to do it for me. Whether they’re styled street cars, professional-level drift cars or circuit hacks, they all have a certain amount of charm. I guess what makes them most appealing is that they’re nearly all driven as intended.

For the first time, the annual 86Fest was held on a Saturday as opposed to its normal weekday slot. While things were a bit slower to get going in the morning, by the early afternoon the entire paddock in Mondello Park was overrun with cars. Each break between the track sessions saw more and more cars join the party, too.

At 2:00pm, almost every AE86 in the place queued three abreast on the start/finish straight for the traditional parade lap. Some 190 cars slowly toured the track, with the procession stretching back further than the eye could see. By the time the first cars returned to the paddock through the back entrance near turn 2, the tail end of the convoy was still only rounding turns 7A and 7B.

While the weather did its usual Irish trick of giving several different seasons in a single day, it didn’t seem to have much impact on the day (save for people running for shelter randomly). There were ice creams between the rain showers, so it wasn’t all bad, I suppose.

It did have the effect of all photographs looking like they were taken in different months.

The AE86 is simply a car which you either get, or you don’t. If you’re in the latter camp, that’s fine, it won’t change the owners’ enjoyment. They’ll still carry on doing what they love, oblivious to what others outside their community think.

I’d like to say that I still wouldn’t buy one, but at this stage, I don’t think I can afford one even if I wanted to.

The AE86 on Speedhunters

AE86 Owners Are A Different Type Of Human & I Love Them

You gotta love the 86

Im glad i got the opportunity to have a chat with you Paddy, any coverage of this event just does not do it justice. It simply just has to be seen to be appreciated!!

That being said, you've done an awesome job of capturing the magic of it!

Cheers, Eddy. Good to talk to you!

By far the most fun slow car I've driven. Every time I think about selling to make room for another car I drive it and realize I can't part with it. I'm bias but everyone should drive an AE at full tilt at least once.

“Not Japan” it’s funny that you had to say that. Lol

Just covering my own ass!

Is that 111 car a Celica? And if so, are there more pictures?

Not in its current guise, but we have featured it previously – http://www.speedhunters.com/2017/12/the-worlds-best-celica-drift-car/

I remember that article. Love this car! I wouldn't have guessed it was the same car with the visual change. I'm looking to build an RA21 Celica in the near future. Something about these cars just gets me.

I do believe it is. You can check this out for more pics of it. https://www.instagram.com/harryhudson1989/

So glad I decided to go there. It was an awesome event.

Anyone who puts spotlights on an 86 should be hung drawn and quartered.
Such a terrible idea 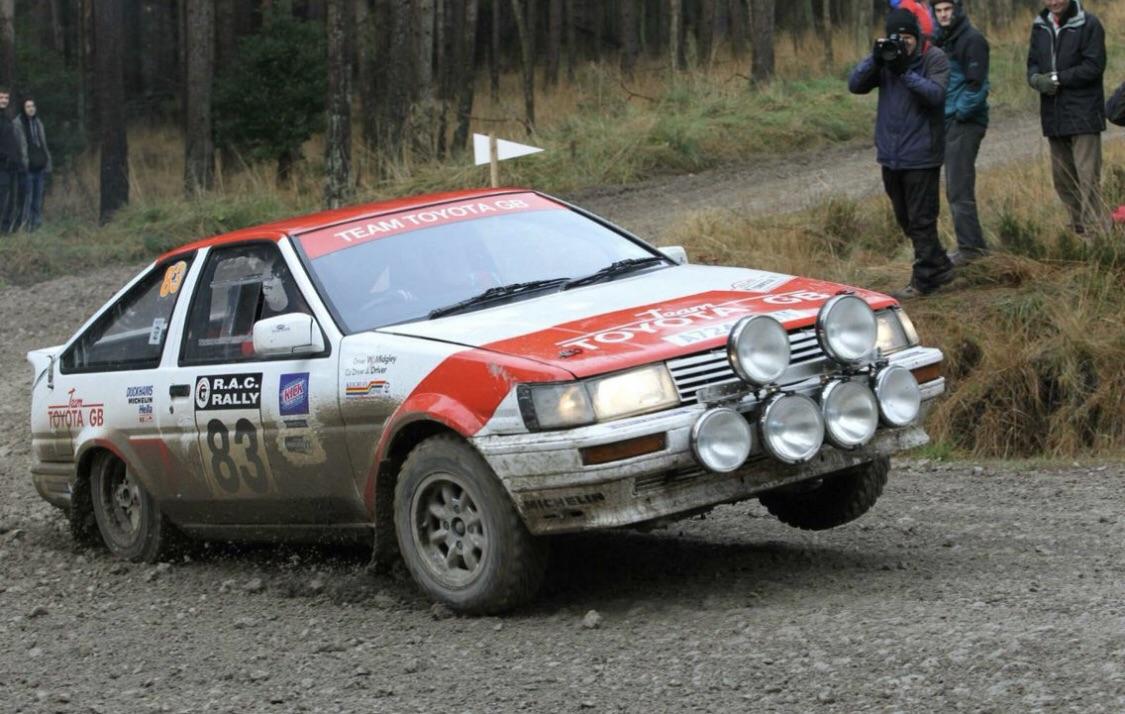 You do know that the ae86 always had a huge presence in rallying right? And i hope you also know that in Ireland and Europe in general,rallying is probably the biggest form of autosport. Spotlights on a 86 is a rally thing,some people like it,some don´t, but it is a look that will always be popular

If all your friends jumped off a cliff, would you?
Just because you can, doesn't mean you should etc etc

I mean, if you like putting tumors on the front of a car and completely ruining the look of it then sweet, whatever you're into....

Paddy, how much would a good condition AE86 cost in Ireland?

Talking to a few people at the event, a budget of €10-€15k would be needed for something 'good' with regards to a Japanese model. A good UK / Ireland car could be worth €20k plus.

That's really interesting to see how highly coveted UK/Ireland cars are in relation to other parts of the world. I've owned my Canadian AE86 for 21 years and have witnessed the ebbs and flows of the "scene" here in Alberta. You don't see too many of them on the road anymore although there is the odd one at a car show. The ones that pop up on the classifieds are either rust buckets ($3-6K), half stripped "drift missiles" ($6-10k), or (in some very rare cases) pristine examples.

The funny thing is that the pristine ones are typically listed at $10-12K CAD but nobody buys them. Most people leave comments saying that it's over priced. What A LOT of those critics don't understand is that buying one that has been ravaged by tin worm is going to cost an arm and leg to get under control. Getting a seasoned auto body technician to cut, patch, and paint a vehicle this old is never going carry a good return on investment. It's got to be a labour of love otherwise it will never be finished.

Prices vary wildly depending on spec etc. For some reason the UK spec car fetch more of a premium in Ireland. Looking the few cars for sale at the moment your looking at 10k euro for a car that is in road worthy condition, mods being wheels, suspension, exhaust, but realistically could do with a respray and inevitably some welding. Prices go up from there. Booters were traditionally a few thousand cheaper but have now began to creep up to coupe prices from a few years ago

Thank you for the information Peter. I had to really think about what a "booter" was for a minute! Lol

Picture #47 is lit! And will there be a feature on the BN Sports car?