There’s honestly few more effective ways to feel old than reminiscing about the past.

Sure, some mornings my popping joints serve as a firm reminder I am no longer in my teens, but what really makes me feel decrepit is thinking that at one point not only was there a landline in my household, but that we couldn’t couldn’t use said line at the same time our computer was connected to the internet.

Worse still, that computer was the only way we could connect to the internet, and it had less processing power than my current phone. Absurd in hindsight and a time that will soon become a distant memory.

The ’80s and ’90s were an interesting time for automobiles. The gas crisis of the 1970s was still on the minds of basically every manufacturer (which helped usher in the production use of turbochargers), pop-up headlights had yet to be mandated out of existence, and near the end of this time automakers were finally figuring out how to better incorporate 5mph bumpers into vehicle designs.

Keeping cars of this era running – especially the less significant to more eccentric – is no easy task. Because these vehicles weren’t really designed to go the distance, OEM manufacturers stopped making replacement parts for them quite early on.

In an effort to keep many of these cars alive, niche communities arose simply out of necessity.

That little ‘catch-22′ when it comes to appreciating these cars, is where Ontario Canada’s own Oblivion show got its name.

This is an event designed to celebrate not only the iconic cars of the ’80s and ’90s, but also the less-than-memorable ones that somehow managed to worm their way into the hearts of North American car enthusiasts.

Oblivion: Episode One, was hosted in a parking lot, but the sequel was held at Ontario Place. For those unfamiliar, which is probably some 95% of you, this is a Canadian amusement park that had its heyday in the heart of the ‘rad era’. Think bumper cars, waterslides, Legoland, paddle boats, and most notably, the world’s first permanent IMAX theater (the golf ball-looking building in the background of many of these photos).

Today it lives purely on borrowed time, waiting for one of the several proposals for its reimagining to pass through bureaucratic red tape.

Somehow, the Oblivion show-runners managed to grease the right palms and host what I am pretty sure is the only car show to have ever taken place within the actual venue.

If only I could remember useful information nearly as long…

When discussing the rad era it’s easy to default to the mainstream vehicles that remain fixtures of the automotive community. I truly appreciate those who keep cars like the E36 BMW M3 in exceptional shape, but I was really curious about the individuals that kept oddball cars around.

What makes them want to keep the fringe vehicles from the crusher?

There were plenty of Foxbody Mustangs made, but the SVO models were special in that they didn’t come with the famous 5.0-litre V8 this generation of Mustang are known for. Instead, they had a 2.3L turbo four cylinder under the hood. The car above, which is an 1984.5  model, came with recessed headlights, disc brakes all around, and redesigned suspension by Koni. SVOs didn’t sell in huge numbers and thus are fairly rare.

This SVO is now in the hands of a Ford parts specialist aims to keep it in peak operable condition as an example of the turbo Mustang that laid the blueprint for those that followed generations later.

Not all the cars kept around and displayed at Oblivion II were memorable by any sort of performance measure. Hyundai in the ’80s wasn’t anywhere near the brand it is today, and the cars they produced were largely considered throw-away.

The Pony was a big seller here in Canada, so the streets were littered with them once upon a time. Most eventually succumbed to rust, thanks to the salty brine we spray on the road at the slightest hint of inclement weather.

The owner of this car stopped winter driving after realizing he had one of the few operable ones left in the area. After more than three decades with a car 99% of the car community tells him to part with, he’s developed a bit of a sense of humor about it.

My favorite of the cars that really had no reason to still be on the road was this brown-on-brown 1980 Pontiac Grand LeMans.

Urethane front panels well worn, trim dented and paint faded, the car was far from pristine. But it was clear someone put some effort into keeping it around this long, and I had to find out why.

To gain an appreciation for this car’s significance to its owner, I want you to think back to your childhood family vehicle. Maybe your parents bought it new, or perhaps they acquired it secondhand, but either way it was most certainly a memorable fixture of your upbringing.

The way it smelled, the way the seat hurt your back on long road trips, and the gum that was impossibly stuck in the ashtray. There may have been a thousand other cars like it on the road, but that one was yours.

Never before have I been reminded of my own family runabout more than with this car. The feelings of nostalgia it provided via brochures, sales receipts and era-correct accessories made it one of my favorite cars of Oblivion II.

I also have no shame in admitting seeing the Tyco Scorcher 6×6 in the rear seat brought serious feelings of envy from my past. It’s hard to put into words exactly how much nine-year-old Dave wanted one of these.

So I’ve touched on the American and the slightly obscure, but how about the sleeper classics from the rad era?

Like most of the cars of this time, imports were extremely plentiful and thus didn’t get the attention or preservation they deserved until years after their production ceased. Hondas in general saw all manner of disrespect shown toward them.

Disposable daily use, racing of various types, terrible modification on top of terrible modification, clean examples of BAs, DAs and EFs are so very hard to find these days that if you want to pick one up you need to be prepared to part with a fairly large chunk of cash.

This makes those who are preserving cars of this nature today pretty smart.

This ever-increasing value isn’t just true of Hondas, but Toyotas, Nissans and Mazdas are creeping up in price as well. With each passing year I wonder which import will become this generation’s ’32 Ford, ’67 Camaro or ’65 GTO.

But that doesn’t mean they should all be bubble-wrapped either. Mildly tuned examples like the Cressida above are perhaps the perfect method of preservation – nothing done that is sacrilegious, but it’s not factory-stock either.

Sadly, in what seemed like no time at all the awards were over and the event was coming to a close. As the varied tones of different vehicles barked to life I hung around in true Speedhunter fashion to catch a few of the cars rolling out.

Those who saw these odd line-ups pull out onto the main road were no doubt a little confused about what was going on, and maybe even confused as to what year it was.

If you can’t quite get enough nostalgia take a further look back in time at the View-Master gallery chapter below, and if you’ve got any questions about models that have gone unmentioned do feel free to ask. It probably shows, but I could reminisce for hours and hours…

Is that tiki/bamboo roll cage in the turbo II FC track legal?!??!

I freakin loved the Scorcher! I had a red one too when I was 5 or 6 and my older brother had the Fast Traxx. Both of them absolutely hammered for back then and the Scorcher was tough, used to bounce off brick walls at full speed haha. I've always wanted another one ever since (Syd, Australia)

What kind of Ford is the grey one with the BXCV 441 license plate? I've never seen one.

Yep, as DSKF said it's a Ford EXP, a weird 2 door that existed in the 80s I think before the escort and Tempo if I recall.

interested in the Fiat Coupe, because I don't think they are sold in North America. is it one of the first to come to NA? and which version it is? is it with the 4-cyl Lancia Delta Integrale engine or the top-of-the-line 5-cyl 20v turbo.

I think it's the 5cyl, it was imported the owner also has a skoda.

thanks. although the Fiat Coupe is not exactly rare in my country, it is interesting to see someone in NA drive one.

Seeing that Scorcher 6x6 and then reading your comment hit me right in the feels. I know how that was.

The louvers on the dark Prelude are 1/4 that are known to exist the world according to the owner. (You can barely see them on the front shot - the dark lines on the rear window)
Those 2 Preludes are insanely well done!

Hey Dave, great post! Wish my Legnum made it... Will you be shooting at Radwood Detroit?

I knew your car would be there (SK LEDS) but then for whatever reason I didn't end up finding it. I don't think I can do Detroit this year sadly.

Just curious, in the pictures after the article, what in the sweet hell is that olive green jeep looking thing? That thing looks absolutely sick! I want one for myself. Does anyone know? 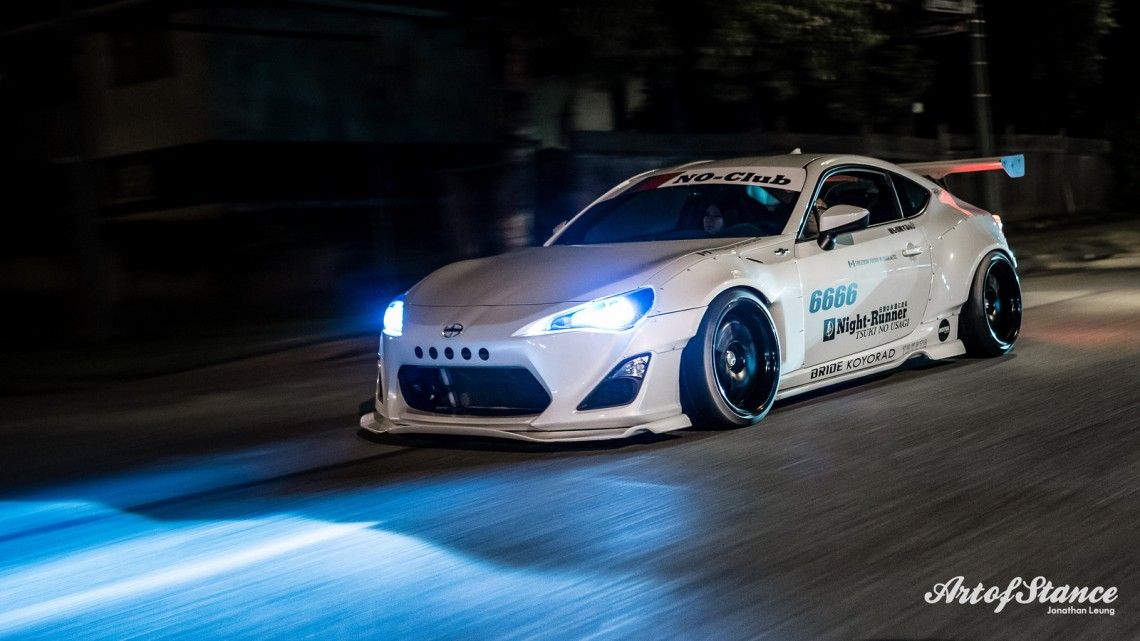 It's a Lada, liek the plate says.

Yup. Lada Niva. From the former Soviet Republic. In the UK they enjoyed a dubious reputation but Top Gear mucked about with one to immense hilarity and it took just about everything they threw at it. And they didn't throw gently!

Yup, they are everywhere here. Canada was the second largest market for the Niva after Russia.... something about handling ridiculously cold conditions and built like a brick $h!t house.

neighbor kid had one with 2 15" subs with chrome three spoke wheels. His was the gtz model.

I was secretly hoping someone would appreciate that photo.

Hey, Canada. You know what? You are alright. Stacy cool.

It was an awsome show. One of a kind for sure.

One of a kind..? This show (as cool as it may be) is a direct copy of Radwood. And not the only one, either.

Totally were Volvos, I'm not sure how I didn't take a picture of any, considering the first turbo car I was in was my dad's 91 940se.

There is what appears to be a Volvo 850 T5-R sedan lurking in the photo of the white Prelude. With bike rack(s). It looks to be driving out (or in) and is also in the background of the shot of the blue Pontiac. If it is legit, I would say it is very rare.

Great post! You mentioned the preservation required and I was blown away by this one gentleman's Monte Carlo. The interior was immaculate and he claimed it was all original. It was unbelievable.

Dave!!! Thank you so much for featuring my Project Tarmac EF Civic! This made the years of hard work worth it

That's preeetttty much it, save for a few repeats.

I'll see if I can find, or feature, some Rad era stuff though before winter hits.

Great coverage of an awesome event. Thanks Dave!!

Nice!! I also spy a cameo from Yuri of the StraightPipes Youtube channel!

it was a great day and awesome weather couldn't of gone any better. Thanks for the great article and pictures! Cant wait for Oblivion 3 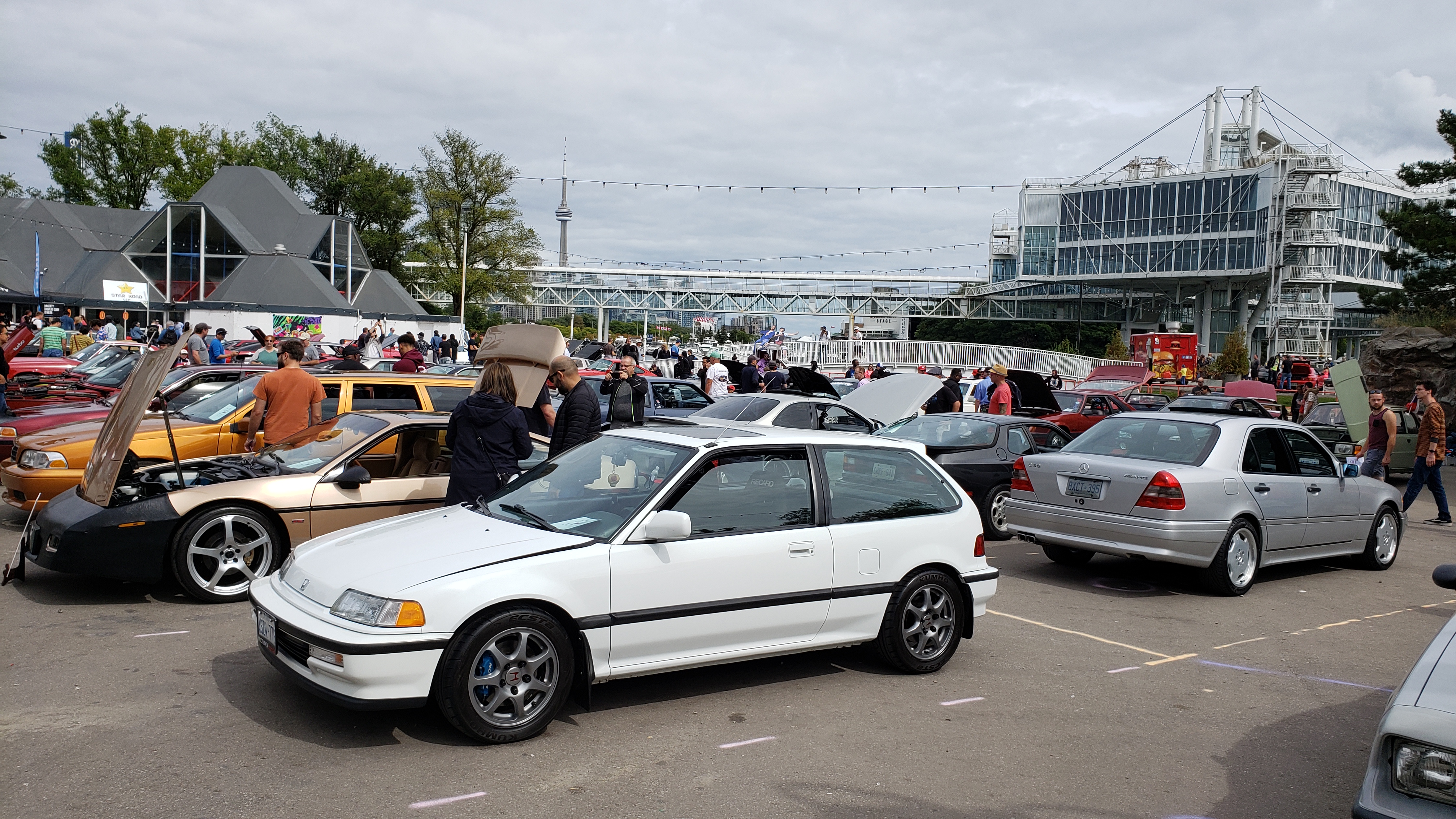