There’s really no shortage of things to do, but with Naveed on patrol this year, I realized I could take it easy. Imagine that…

Rather than killing myself at Laguna Seca, racing over to squeeze in a concours event before heading back to the track, then finding the energy for a late-night meet and so on, I opted to do something I haven’t for a few years: kick back and relax. I say that, but Sara and I still managed nearly 7,000 shots at the Rolex Monterey Motorsports Reunion and a few other events over the course of two days. We only published about 160; it’s weird how that works.

Film, on the other hand, lends you the opportunity to slow down. Way down. Of 96 total shots taken on three rolls, 89 have found their way into this story.

The lion’s share were indeed taken at Laguna Seca, but as I’ve already posted a preview gallery of my favorite shots and with Naveed already filling us in on the details surrounding the featured marque at the RMMR this year — IMSA — there’s no sense carrying on about what happened there by smashing on my keyboard repeatedly.

Some of us are visual learners, after all.

While the vintage scenes from the track will always inspire me the most, there’s far more to Monterey Car Week. Some of it falls through the cracks, like a random McLaren F1 sighting, running into a little muscle car show, or the scenes at RM Sotheby’s as they stage for another day of auctions — all of which can be seen in the galleries below.

You’ll also notice down below that I ended Car Week in the exact location where I kicked off our coverage: at Impeccable Inc. Here, a number of awe-inspiring projects are under the knife, and it was cool to see the progress on a very special car since my previous visit some months back. The body in red primer – just as it was prepared originally — you’ll see at the end of the gallery, is actually the same car that I finished off that first story with. It didn’t look like much back then, but it’s amazing the difference a year makes.

At any rate, hopefully it’s just that little bit more inspiring to see these vintage behemoths of yesteryear on a vintage medium.

If you’re a long-time film-shooting purist, I’ll be quick to admit that I’ve hopped on the 35mm bandwagon in the past few years, but at the same time it’s nice to see film’s popularity on the rise in this digital world. On that note, it would be cool to see some of your favorite automotive shots that you’ve captured on film in the comments section below, particularly those from events with an old school theme.

Frankly, of the thousands of digital shots from the weekend sitting around on my hard drive, many are probably better than these, and might even tell the whole story a little better. But there’s a sense of character that’s lost along the way.

So, I’ve gathered my shots from those three rolls — Kodak Color Plus 200, Gold 200, and finally some expired Mitsubishi MX-III 100 — and posted them below in chronological order. You can use your imagination for the rest.

Friday On Film Saturday Is For Shooting
ADVERTISEMENT

That shot of the 550 LM catching a sun ray is just sublime.

Thanks! I love that car more than I should. Something to do with my childhood and NFS III, I think...

It's always a treat to go to an event like this because you will never see these cars out on the street, Hope you enjoyed the event!

Those W123's wagons fill me up with envy hehehe

for a car that wasn't every exciting 'au naturel', that race prepped 924 looks great! anything IMSA i s'pose...

IMSA bodywork is the absolute best.

That McLaren F1 LM... that's exactly how I would order mine!

Awesome work Trevor. The 550 LM shot and the panning shot of the Canon car (group C? I forget) both caught my eye. What film body do you shoot on? I just picked up an AE1 and a 50mm f1.4 to play with.

Thanks Xander. These were with my Canon EOS 1V. Cutting edge tech about 20 years ago, but I didn't want to mess about after replacing my Nikon FM2 when I broke it's shutter curtain. And I can use all my modern EF glass with this.

I've heard good things about the later Canon EOS SLRs. Definitely makes for an awesome pairing with your modern gear. Before long you'll be scouring for weird expired films and shooting 120 through vintage soviet glass and all kinds of weird stuff

Haha by your definitely it looks it's already too late for me! One of these rolls (the Mitsubishi stuff) expired in '05.

I think the oldest film I've shot with is this - http://www.speedhunters.com/2018/12/old-cars-old-film-mooneyes-on-expired-35mm/

Here's the soviet glass, too, although this was shot on digital - http://www.speedhunters.com/2018/08/shooting-million-dollar-935-22-lens/

Medium format seems to be all I'm missing. Probably won't make a go at that any time soon, though, if I'm honest.

I've just started shooting on 35mm too, after my partners dad gave me his film camera they took on holidays when she was younger. It's a lot of fun, and really makes you slow down and frame your shots and really think about what you are doing. Here's one of my first shots on Kodak Tri-X. 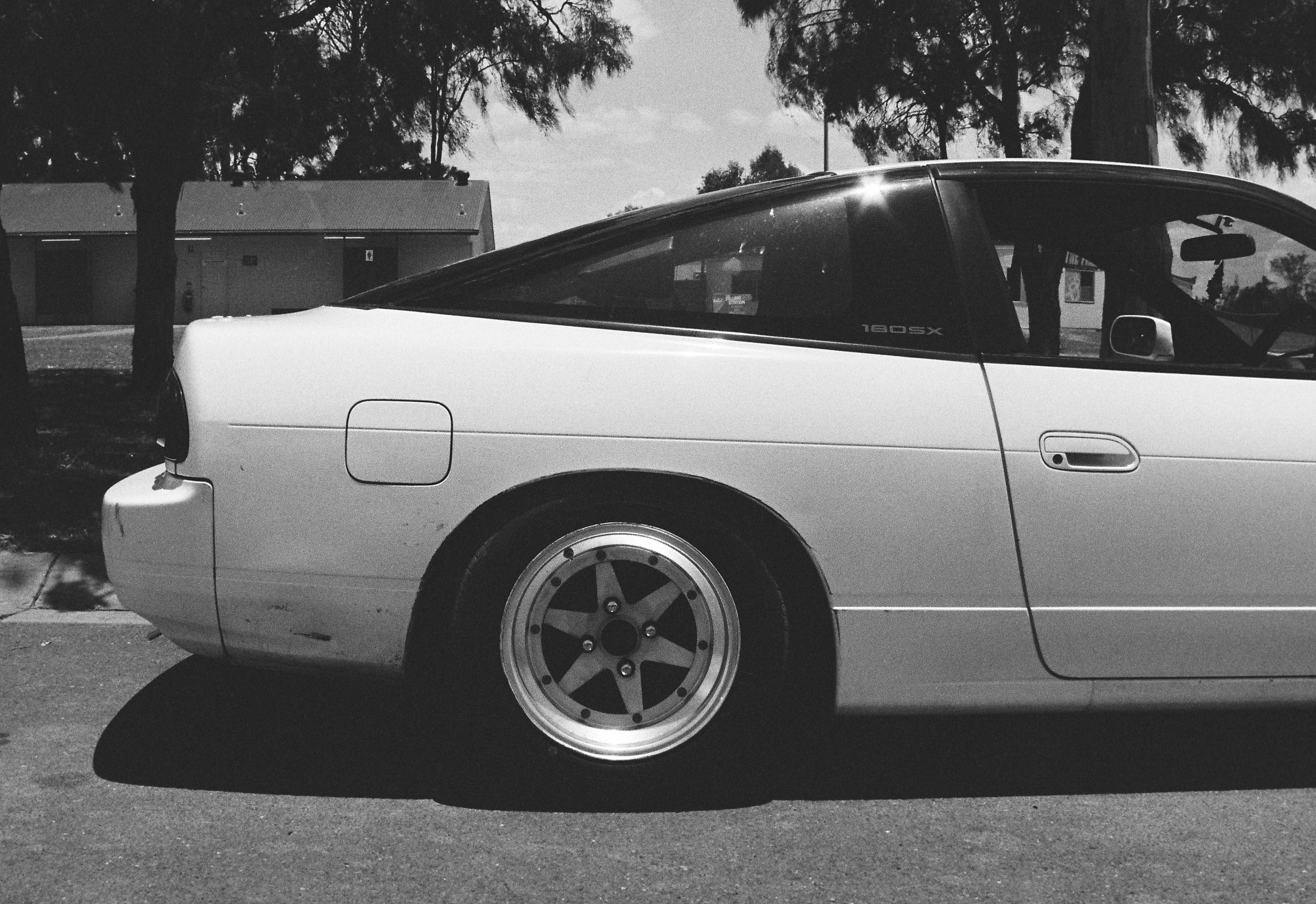 Nice! I'm not much of a B&W guy but it's just so cool when it's film. Thanks for sharing!

Love seeing how 90% of the cars shared nothing with the road going versions. Except the fiberglass that made them "look" like a Z car or a corvette.

I am so thankful you guys have been posting more and more film photos this year.

Fantastic photos! I don't know how you make film look this good, but I sure do enjoy your talent and perspective.

I've been shooting on 35mm for years now - haven't picked the camera up in a while. I'm pleased to see analogue media coming back into use - film photography has something digital doesn't, I find it hard to describe but I feel it's something to do with 'atmosphere' or 'feel'.

I used to run a small business making photographic books - the shot I've selected was a Lotus Exige owned by a family friend, who has since sadly passed away. Shot on a Canon EOS 30V using Kodak BW400CN film. 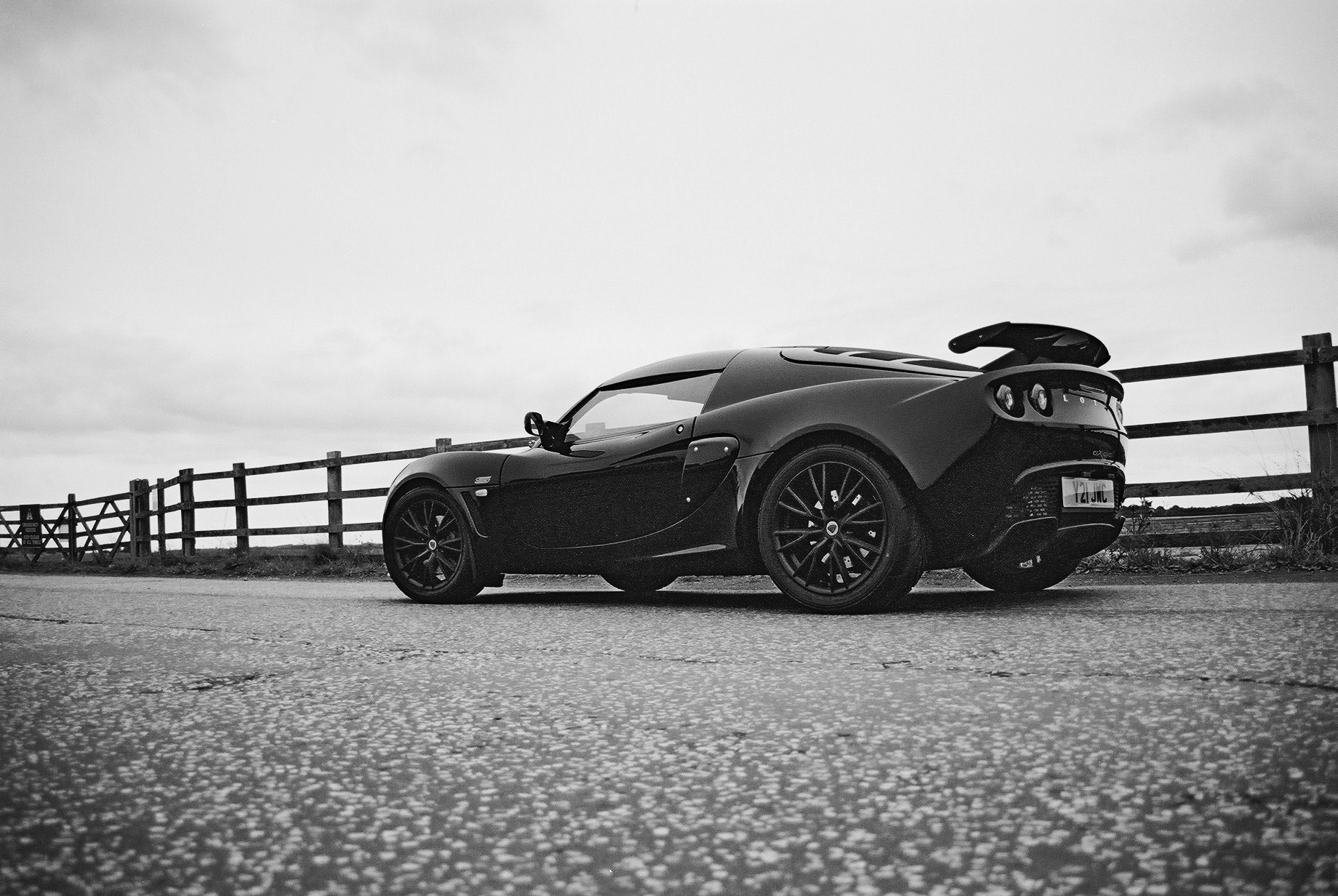 Sweet! That film lends itself nicely to that subject and setting. Black and white has always been a struggle for me, only roll I've ever shot that I really really liked was some Potsdam Kino 100 from Lomography which I tested and published here a while back.

It is pretty cool to see film being used more widely, though. I know of a number of prolific portrait photographers who never stopped. You just really have to know your stuff to get it just right, pairing the right locations and subjects with the right film type and so on. There's definitely a lot to it that I haven't come close to mastering.

It was a great film stock, unfortunately it has since been discontinued by Kodak - the closest alternative I feel is Illford XP2.

As you say there are definitely certain subjects that lend themselves to monochrome imagery and the Lotus definitely fitted that bill. You can almost dive into the black body of the car.

Not sure how many 35mm SLR bodies you have (I still have the 30v and I also have a 1N RS) but if you have two bodies and a selection of lenses I would load up one B/W and one colour, take them out and go for it. Perhaps avoiding trying ‘too’ hard to find subjects that definitely lend themselves. I’ve shot lots of stuff in B/W and sometimes have been pleasantly surprised by something I though wouldn’t look great when letting the shutter off.

I've only used their Delta 200, will have to try to XP2 if its anything like the shot you just shared. Was the image processed much after the fact? And I'm guessing the car itself was black?

Anyway, I shoot with a Canon EOS 1V. I started out with my grandpa's Nikon FM2 but broke the shutter a while back and then upgraded. I have a Minolta from my other grandfather from the same era, and a number of other film cameras that have been handed down to me which I haven't tried out yet. Sort of hard to justify using any of them when I have the 1V, but sooner or later I'll get around to goofing off with them. Hoping for some funky light leaks.

Yep, the car was black.

XP2 is still C41 process so still relatively easy to develop, well here in the UK anyway. The other illford film stock available tends to be a different process so just be sure what you’re buying is C41.

I know what you’re saying. The 1N I have makes every other film SLR seems massively outclassed.

I have a rolleiflex SLR body with rangefinder lenses I have tried to use, but the imagery I get is a bit too old school for anything I’ve ever shot. Perhaps if I got into shooting extreme vintage engineering from the 30’s etc it might work. I feel the 1N and 30V I have create the best blend of sharp imagery with the analogue feel.

I saw you touched on medium format in a post further up. I have shot on medium and large format in the past, they are fun but a much bigger challenge in terms of setting up shots and the size of the kit - especially when going to large format.