A few months back, you may recall me mentioning a special 911 that I drove to Luftgekühlt for my buddy G.

I initially wanted to spotlight the car during the event coverage, but after driving it down from the Bay Area to break in the new motor, I realized the car deserved a bit more of a story to really highlight its uniqueness in a sea of 911s. If you’re scratching your head about this Porsche, don’t worry, I was too when I was first introduced to it.

Upon first glance, the modest silver paint with matching Fuchs wheels and whale tail give the appearance of any normal G-body 911. I did, however, notice the Euro fender side markers, so immediately figured it was a European import car, which proved later to be true.

The modest lowered ride height was also an immediate Euro-model giveaway, but it’s also a modification than many Porsche enthusiasts opt for when building or restoring their cars, so I wasn’t sure if it was just a change G had made.

Further peeking into the cockpit, I came across a few odd features. ‘No sunroof, manual windows, no radio… and wait, no back seats?’ I thought to myself, confused as to why everything was missing. Of course the sport seats (which have more dramatic side bolsters) were also an uncommon option for a non-RS or non-RSR car.

I suddenly began to think about why Porsche would remove all of the comfort features on such a late model car? Mind you, this was developed very late in the ’80s, so A/C and power windows were damn near basic necessities, especially for high-end luxury cars.

Finally, while I was driving, I caught a glimpse of the ‘Clubsport’ sticker on the driver side fender peeking through the windshield. My initial thoughts were that I’d been seeing a few ‘Clubsport’ variants of the Nissan R34 GT-R floating around collector auctions over the last few months, and those cars were apparently factory-specced track cars. ‘Could this be like one of those?’ I thought…

When we finally arrived in Los Angeles, our group of P-car drivers voted for a spirited drive through Angeles Forest to kick things off. And since the majority of the drive down was pretty much a straight shot on a two-lane highway, I hadn’t really prepared myself for how different the Clubsport was than any other G-body Carrera. It was at this point where the car really started to shine.

I was keeping up with G in the 964 Turbo S2 and another friend’s GT3 RS, and even managed to pass a buddy who was driving his dedicated track car on the open roads. It was quite mind boggling if I’m honest. This car should not have been keeping up with either of those cars mentioned, let alone passing some of them. So when the drive ended and we finally got home from the long weekend, I began to dig deeper into what makes the Clubsport such an iconic 911.

In 1987, under the ‘too padded’ criticisms of many 911 enthusiasts, Porsche decided to have a final go at creating a thoroughbred 911 amongst the lineage of other G-body 911s than spanned the 15-year production spread.

Two primary areas of the standard Carrera Coupe were tackled in order to create a car that was special enough to boast its own name. The first being weight, a key obstacle and component to any dedicated performance car, and secondly, engine balance. Similar characteristics that inspired the hero icon of all 911s, the 2.7 RS.

The Clubsport began life as a standard 1987-1989 911 Coupe. A special chassis code – M637 – was given to these cars to emphasize their individual characteristics over the normal cars, where production was then taken place. Weight was reduced with removal of any and all comfort features found in the standard car, including deletion of the following: electric sunroof, rear and sidewall trim panels, central locking system, rear wiper, front fog lights, headlamp washers, PVC under seal, passenger sun visor, boot courtesy lights, glove box lock, coat hooks, electric windows, and electric seats.

Furthermore, the rear seats and belts were removed, the heating system was converted to the old fashioned manual system, the wiring harness was simplified, the bumper mounts were lightened, the spare wheel was a special lightweight version, the PVC coating from the fuel tank was removed, and the front bumper was sculpted to direct more air towards the oil cooler.

To balance the low-carb diet on the Clubsport, Porsche’s ‘Sport’ division took the European 3.2L flat six and modified it to ‘Blueprint’ spec. This meant the intake valve stems were lightweight and hollow, the engine management system was tuned to extend RPMs to 6,840rpm from 6,520rpm, the engine and transaxle mounts were beefed up, a modified air cleaner with carbon canister plug was fitted, a limited slip differential was added to the transaxle, a short-throw shifter replaced the factory shifter linkage, and 4th and 5th gear ratios were revised.

The Sport division completed the overhaul by stamping an ‘SP’ to the crankcase and cylinder head to differentiate the Clubsport from the standard Carrera.

It’s incredible how much thought and revision went into the development of the Clubsport, even though Porsche at this time was already selling its supercar – the 959. The drastic dietary measures taken to create the Clubsport resulted in an overall savings of 75kg over the standard Euro model. Add that to the enhanced engine’s 245hp, and you end up with a power-to-weight ratio of over 200hp/ton.

In a straight line it was faster than every standard Carrera, and on the track it was even faster than the iconic 2.7 RS. As impressive as these numbers are, the car received mixed reactions when it was released in 1987.

It’s A Hit In My Books

In the late ‘80s, most consumers in the Porsche market still wanted to retain the creature comforts that almost all 911s came standard with. To add to that, the racing aficionados claimed that the car still wasn’t thoroughbred enough, and hoped that Porsche would’ve instead created a full-blown RS model, despite their attempts to bridge the gap with the Clubsport.

Because of these presumptions, and the desire to keep the model special, Porsche only developed a total of 340 Clubsports for the world market.

On one hand, I find myself agreeing with the critics in the fact that I wish the car was just a tad bit more race oriented. Don’t get me wrong, the Clubsport is plenty fast and quite a delight on curvy roads; my criticisms are more in the aesthetics of the car.

One of the key characteristics of the 2.7 RS is the gorgeous factory body modifications made to truly separate it from the 911S, or any other 911 of the time for that matter. Despite the Clubsport taking its inspiration from the 2.7 RS, the aesthetic appeal just isn’t distinguishable enough when compared against other 911 Carreras.

On the contrary, I do have to agree that this is a sports-purpose 911. Its mechanical components and lightweight feel are unparalleled to any other 911 within its production era; it feels light, tight, and nimble, just as any factory specced track car should be. And the fact that it’s as fast as a 930 – or faster than a 2.7 RS – is concrete evidence that this car means business. It just doesn’t look like it.

To conclude, I’m left with thoughts of how much of an underdog the Clubsport truly is. When it’s parked next to various other 911s, you can’t help but walk right past it. It won’t shout at you to get your attention, and it certainly doesn’t have any super-defining aesthetics to stop you in your tracks – other than a few stickers, if you even see them.

But for me personally, the Clubsport hits a sweet spot. I’ve mentioned it prior, but I actually enjoy subtleness in certain cars, especially when they’re ridiculously capable of dominating more ‘sought after’ models. The reaction people get when the unassuming little G-body 911 passes a 930 or 964 Turbo in the mountains is honestly priceless, and not many other cars can prove their abilities like that.

With that said, although the 911 Clubsport never became a true ‘RS’, it’s as close as anyone can get if they’re looking for that type of driving experience. 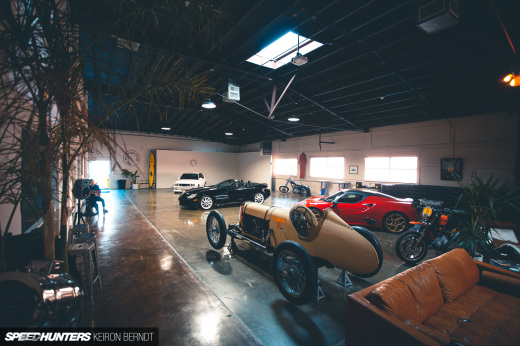 It’s About The People: The Motoring Club

Nice, Its easy to over build, but hard to get good balance, go for a full on race set up and you need to trailer, build more power without loosing weight you need a lot more tire etc. I wonder if the wheels are a bit lighter? Thanks for going through the specs. I think keeping it looking stockish is spot on all the work making it light would be lost. Its kind of where Im at on one of my builds I kind of go a bit over board then back off a bit still I need ac so guess I will have to just lighten the whole engine. If only I had a factory.

Buddy "G"? Oh please, give me a break with the anonymous owner BS.

The Clubsports are excellent cars though, and so hard to find. Good shots too.

Jerry, I assure you G is a real person who has the annoying habit of buying rare cars and then handing the keys off to Naveed... I agree, it's total BS. But, yeah, not everyone needs random people to know who they are and what they have...

People get upset when people have their instagram handles on the car AND upset when they don't want recognition?

Some people prefer anonymity? Which to be fair is rare in this day and age.

Do you have any pics of the seats. I didn't catch how they look.....

"subtleness in certain cars" ..couldn't have said it better....excellent piece Naveed (like the "Homologation: A 1973 Porsche Carrera RS 2.7" article)

This was a time when Porsche actually charged less for the Clubsport because it had less kit. Now is the other way round...

I suppose its not hard to keep up with GT3s and 964 turbos white cruising at the speed limit.

I keep looking at the pictures, man I also want a club sport, If only I can hahah

Good to see coverage on the really clean/pure stuff - whatever people want to label it. I love it.

Yes, the Porsche "Clubsport" variants are fairly well known. More well known than a variant such as the 968 Turbo RS of which only four were produced.

Only Idiots park on the tracks, Train time is any time

PVC coating from the fuel tank was removed

- aye, that's not a good decision as far as I'm aware of. Especially in a track-oriented car.

I had heard of the 911CS. And I dislike article titles that speak as if they know what I do or do not know. "The Underdog 911 That You MIght Not Be Aware Of" would have been a better title.

There is also a 944 Clubsport as well, as you may know.