Have you ever taken a step back from all the clutter going on in the automotive industry to just soak in everything that’s been coming forth our way? It’s tremendously overwhelming, especially with so much media vying for our short-lived attention spans.

The same can be said about manufacturers as a whole: The big guys up top who cater to those looking for everyday-go-rounders are creating eco-friendly, integrated cars that make driving seamless. On the other side of the spectrum, the fast guys are beating each others ‘Ring lap times by the millisecond, claiming the throne for a few days before someone else takes it right back.

Often, I sit back and just breathe when reading through some of these articles online, trying to decipher how a different tread pattern on a proprietary tire made so and so’s car better than the previous one.

That’s why when I first heard about the New Stratos coming to life from the Italians across the water, I genuinely felt a bit of relief.

When Lancia first decided to commission Marcello Gandini of the Bertone design house, they made it very clear that in order to win the contract, the car must out-perform, out-engineer, and out-design the aging Fulvia. Gandini, who is the man behind icons like the Lamborghini Miura and Countach, answered with perhaps the most striking rally car to ever exist.

From its wedge shape and semi-rounded windscreen, to its five-spoke wheels and integrated roof spoiler, the Stratos won the hearts of the people at Lancia the moment it arrived – prior to even being approved. It further became known for its avant-garde and modern design amongst the realms of vintage automotive car culture.

While the design cues of the Stratos were extraordinary, its engine is what truly set its path for triple consecutive World Rally Championship wins in 1974, ’75 and ’76. The power came from the same V6 found in the Ferrari Dino, which at the time, Enzo was reluctant to commission.

He feared that the Stratos would take away from the sales of the Dino (and he was probably right) if it shared the same heart. But with the final 2.4L V6 Dino exiting the production line in 1974, Lancia received its grace from Commendatore, receiving 500 units of the de-tuned engine for the Stratos project.

I specifically brought up the significance of the engine because it played a huge part in the success of the car throughout its motorsport career. It’s an on-going debate amongst vintage Italian car aficionados, but I honestly believe that if Lancia went with the first revision of the Stratos – which wore the heart of the Fulvia – the Stratos would have failed.

I argue that the engine was the final piece of the puzzle needed to make the Stratos as fast as it was, because 130hp versus 190hp is just too big of a difference to ignore.

The significance of the old Stratos played a key role in the development of the new one. As we all know, times have changed and with it comes a mountain of constraints for development of a new car.

Big manufacturers spend billions of dollars every few years to revamp their lineage of cars available for consumers, so you can only imagine how difficult it may be for one-off coach builders attempting to do the same. But taking no for an answer was absolutely out of the question for Michael Stoschek, the brains behind the New Stratos.

Stoschek is chairman of the Brose Group, who are the fifth largest family-owned automotive supplier company in the world, and just so happens to be an avid race car driver and car collector as well. Stoschek’s pedigree includes numerous wins in the Carrera Panamericana and European Rallye Championship, taking home trophies behind the seat of none other than a 1971 Porsche 911.

In 2005, Stoschek and Chris Hrabalek were in a meeting when they came up with the spontaneous decision to revive the Stratos, which further resulted in Stoschek’s acquisition of the Stratos trademark.

By 2008, the two enthusiasts were joined by Stoschek’s son Max, and finally commissioned renowned coach builder Pininfarina to build a one-off concept vehicle that portrayed the technicalities and design elements of the New Stratos to the public.

Creating a modern interpretation of an automotive icon can be an astronomical task when going up against constraints like safety and design regulations. But that’s precisely what I love most about the development of the New Stratos, as it seemingly homologated the old car.

Key characteristics such as the Ferrari heart, lightweight composite construction, integrated roll cage, easy split body and iconic roof spoiler, and even the extra space for your racing helmet in the door panel, were all respected by Pininfarina throughout the initial design process.

To further shed light on this, the New Stratos starts off as an F430 Scuderia – the last of the analog Ferraris, and the most thoroughbred version of them at that. Pininfarina then cuts the car in half, reducing its wheel base by 200mm, making for an agile and lightweight mid-engine platform to start with.

From there, the wind-tunnel-proven body (which is 330mm shorter than the F430 Scuderia) is formed around the car, of course being comprised of aluminum and carbon fiber all throughout. And with final assembly underway, the New Stratos receives its entirely re-engineered drivetrain, brakes, wheels, tires, battery, and miscellaneous pieces, which in turn result in a true masterpiece of a machine.

A couple of years ago, New Stratos GbR granted Manifattura Automobili Torino the rights to build 25 of the new cars for selected individuals around the world, one of which ended up right here in the heart of the Bay Area. Recently, my good friend Luca invited me to have a look-see of my own.

Although photos of the New Stratos were released many years prior, I never really knew what I was coming up against to see. After all, doing the whole retro-themed new car thing is clearly a trend amongst everyone in the industry nowadays. The only car I’d previously seen live up to the trend was the first reintroduction of the Ford GT.

But delightfully, the New Stratos absolutely lived up to the hype it’s perceived around. And it was a treat to see this specific one wearing not two, but three pedals on the floor. If you have a spare F430 Scuderia and US$300K lying around, shoot me an email and I’ll happily connect you with the boys over at Issimi to commission one of these for you.

With exceptional design from a world famous coach builder to advanced technology in composite materials, the New Stratos’ development is a nod to its ancestral roots, paying homage in every aspect that it can.

This contemporary interpretation of a truly iconic classic sports car is what we need more of, so if you are listening big manufacturers, please take notes. 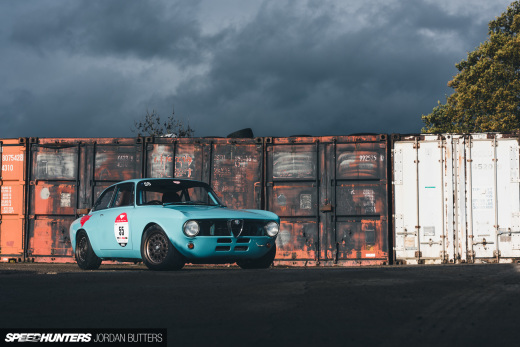 A Classic Alfa That’s All Show And All Go

imo, the twin-turbo V6 from Giulia Quadrifoglio is also a good choice for the car if FCA want to build it

That may be a solid alternative, however, the purpose was to check the boxes of the old car as much as physically possible. Plus when they build one, its based off the Scud as mentioned, so why waste any bit of one of the best Ferrari's made.

You have no idea how madly in love I am with this beauty!

We ned pop-up headlights on this!

Sadly a thing of the past, they don't pass safety legislation any more.
Sure someone can come up with a retrofit though!

Then it would be perfect!

Thanks for the spotlight, the New Stratos has a special place in my heart.

I can understand why Ferrari said they don't want Pininfarina or anyone being involved in building this but also the Scud is no longer why not let it be a good example of Ferrari workmanship on the Scud that then makes the Stratos.

Its not like we are talking about Bod down the road making a few cars this is the Stratos and being made by a great firm, the ppl in Ferrari should be supporting them in the harsh hard to make new different cars world

Looks so nice! Definitely did the Stratos name justice.

Tail lights aren't bolted to a fixed panel; does that mean that this jewel can't be registered to be driven on public US roads?

Just further proof that auto manufacturers can make any car look any way they may want- and given this, continues to confound meas to why we have SOOOOOOO many fugly cars these days.
VERY nice work here!

With such limited production numbers, this car likely falls under an exemption for those regulations. Designers have very little flexibility in design these days.

While there are obviously regulations and such in place now not present in the past, there are plenty of reasonable style recreations current and possible that are not used unless a manu wants it bad enough to buck their bean counters, and the current A/V trend.
I stand by my statement. The latest Supra could have looked many different ways easily, but current design trends produced what we got...a "Meh" car design at best. Not a Supra fan BTW, just used that as an example of current "design" trends that are not beautiful by any stretch, as the old designs more often were.

The things Dino would do to drive one... (I guess he'd fit here too!)