Diversity is key to any automotive gathering in my opinion. It’s what helps draw the most amount of people, giving everyone a taste of their own specific demographic that they identify or relate most with.

So when I heard the sound waves of ’80s pop music overpowering the classical strings playing over the announcement speakers during the recent Sonoma Speed Festival, my senses immediately kicked in, drawing me directly towards the RADwood display.

This is the scene that I can’t seem to get over, no matter how many times I attend a RADwood event. The vibrant neon banners, the rare ’90s poster-child cars on display, and even the attendees in period correct attire – all of it just seems to have an everlasting ‘cool’ vibe that I can’t help but feel at home with.

Though the sub-segment corral was on the smaller side when compared to the rest of the cars at the show, it did not disappoint. It seems the guys associated with RADwood took a more strategic approach this time around, showcasing some of the most sought after – and rare – cars of the ’80s and ’90s era, versus just anything within the period.

Front and center was a short-wheel-base Audi Sport quattro, which I hadn’t had the pleasure of seeing up close until this event.

This is one of those cars that I find myself going into a rabbit hole over, anytime a Group B hillclimb or rally video displaying one shows up on my social media feed. They’re known to be agile, but tricky to control and typically built with generous horsepower. And of course, they always make the right kind of noises to keep everyone’s ear drums pleased.

Throughout the rest of the display sat other hero cars, like an E30 BMW M3 Sport Evo, BCNR33 Nissan Skyline GT-R, Mercedes-Benz 190E 2.5-16 Evo II, and my favorite of the bunch, a Rubystone Red Porsche 964 RS.

But perhaps the better portion of the display was seeing the cars in motion as they made several parade laps throughout the course of the event. Luckily, I was already hanging out at my favorite turn at Sonoma Raceway, so catching them on camera was no issue.

As you all know, I’m a sucker for homologated cars, so seeing these iconic beauties at any event is a treat on its own for me. And Sonoma Speed Festival wasn’t any different, even if there were millions of dollars’ worth of historically significant race cars throughout the rest of the paddocks. After all, only RADwood could pull off seeing an old Rolls-Royce through a downhill apex in the same hurdled pack as an ’80s Corvette ZR-1 and a Ferrari F355.

Needless to say, RADwood played a huge part in the 2019 Sonoma Speed Festival, being that it catered to a slightly different demographic of enthusiasts. It’s odd to say, but not everyone understands the premise behind the culture.

Regardless, it was this finishing touch that made the event as great as it was. As I mentioned in the opening, diversity it key, and RADwood knows exactly how to portray that. 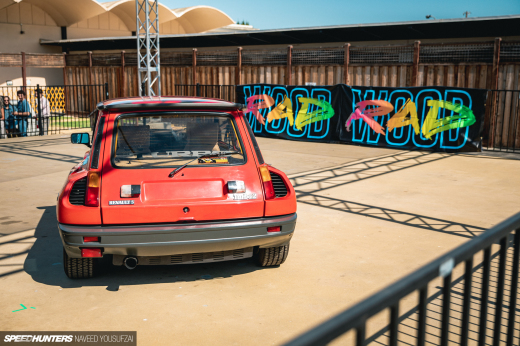 Why does Cally have all the good stuff?!!!! Lived in L.A. twice. Who owned the 959?!!!! OMG! We just had an amazing car show here in New Jersey 2 weeks ago. Top Gear sponsored it. There were 7 McLaren Sennas at the show! I almost fainted. Show was unbelievable! Especially since NJ isn't on the west coast.

Honestly, there's no real reason other than being the best place on the planet lol

Absolutely. Without question SoCal has the best automotive scene in the world, and this shows that NorCal has some great events too that draw a crowd from all over.

Wait, there are Integrales in the States?
This makes me happy.

quite a few actually! I can think of 5 evo's in the bay area alone lol

It was probably the best collection of Rad era cars I've seen assembled and I went to Radwood LA last year! But they really pulled out all the stops.

He's hitting that downhill apex while holding his phone to record huh?

why am I so mesmerized by that porsche paint code?

So much love! A land yacht like the Rolls-Royce has no rights to be on a race track, yet it looks like a pretty comfortable way to drive around one. LOL!

That AMG 6.0 wide body is definitely one of my dream cars.