As I’ve touched on in my previous coverage from the Oregon Trail Rally, I’ve long wanted to shoot an event like this. But at the same time, I knew it would be an incredible amount of work to pull it off properly.

Beyond the 18-hour day that would be required to shoot the event itself, another full day of recce would be necessary if I was going to go about it on my own. As such, I was happy for the opportunity to tag along with my friend Chris Daley for the day, rather than to drive aimlessly through the wilderness of the Pacific Northwest myself.

While I wanted to share a bit of what goes on behind the scenes as well as the various stunning landscapes we encountered on our journey, this didn’t quite fit into my standard coverage of the event. So, here we are…

Hour after hour was spent in the truck on Saturday, and each stage was completely different than (and miles apart from) the others. But before I dive into our adventures from the day it’s best I introduce the cast.

First up is Chris Daley in the #38 vest, who was shooting for the event itself and no less than a couple of dozen regional drivers. As such, there was no wiggle room in his itinerary for the day.

Then, there was another Trevor in the group — Trevor Stevens — in vest #18 and, finally, Curtis Zapar. While Curtis spent much of the day gazing majestically at the horizon, his role as ‘Swahili Translator’ worked wonders with the locals.

There’s plenty of standing around and waiting between stages to catch the cars on course, so having a decent group of guys to hang out with for the day goes a long, long way.

Another important aspect is actually having a vehicle that can travel the courses. Sure, these are public roads so any car can technically make it in good weather, but being able to climb off the trail at any point means you can find your way to a safe spot without having to hike out to it.

This might seem like a small thing, but over the course of the day I logged eight miles of wandering around and, frankly, it didn’t seem that I did all that much exploring by foot. It would have been at least twice this if we had to hike to our initial locations.

For our first stop of the day we posted up at The Dalles Uphill, towards one of the last corners of the track. I was mostly using my 500mm here to get the cars head-on, but I couldn’t help but do a bit of sightseeing as well.

The countryside that accompanies the Oregon Trail Rally is an experience in its own right.

While I keep telling myself I’ll sell the 500mm to pick up a 400mm prime — mostly due to its uselessness at the track on a warm day thanks to heat waves off the tarmac — this lens keeps proving its usefulness in different scenarios.

I also found that if I sprinted from the entry of one corner, I could catch the same car blasting out of the last hairpin down the hill. It’s always nice to have a couple of extra shots in the bag.

There were plenty of other vantage points to catch the action from at this spot, which is just as well seeing as how we’d need to stay here until the very last competitor came through and the safety car had cleared the course.

On The Road Again

After the sweep team came through it was back to the 4Runner and off to catch some cars at the service location in Goldendale. You really, really have to be careful to plan your day out properly, as a misstep here could mean you won’t be allowed onto the course to get to your shooting location.

But with everything pre-planned to a T, all went smoothly. It shows how far proper preparation goes when you’re shooting an event like this.

Arriving at our last location for the day an hour and a half in advance meant we could relax a while and find the best possible vantage point for the corner. No Curtis, that ain’t it.

Sometimes this means hacking away at the underbrush to make sure you get the exact angle you want.

Other times hiking out a mile or two was the only option. While it’s generally pretty terrible to lug your gear around a race track, out here in the wilderness of rural Washington and Oregon it really is quite nice on its own.

While the locals were kind enough to let us park on the edge of their property, they took this as an opportunity to hang out and harass us for the next two hours. Eventually they rode off into the sunset as the festivities for the day come to a close.

Whether you’re spectating, driving, or shooting the Oregon Trail Rally, I can assure you that it’ll be a pleasant viewing experience. And, impassable roads or not, Chris managed not to kill us, so that certainly was a plus.

As each course is miles from the next it really is quite a colossal amount of work to shoot a rally, and there’s simply no way around it. But, in the end, it is such a rewarding experience.

There are few times in life where you get to combine such epic natural beauty with the mechanical madness of motorsport and, if you can’t already tell, I’m hooked on rally. 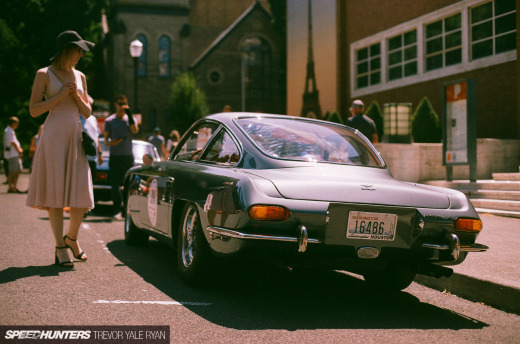 The Automobile: An Art Form

Great coverage! This is my hometown. It ain't much but some of the views are great.

Mind telling what lens the 500mm is?

The cheap one: 4.5 non-IS. You want it? You can take real nice photos of birds. Sometimes cars.

Currently I don't have the budget for a new lens, but I'm considering extending the long end of my equipment, and it's nice to know what the best are using so I can take it into consideration (and got some example-photos)

Thanks for the advice!
I'll look into it and certainly consider it once I can afford another lens (so far my longest is a 70-200, which can be a little short for motorsport especially without a press pass)

All versions of the 70-200 are pretty good too. I wouldn't bother with an extender tho, so you're going about it the right way.

Seriously consider a used lens. Test it at all f-stops, close focus, infinity focus, IS, and check the files for imperfections if you can. And ask what they used it for, etc. You'll definitely be able to get nearly a your money back when you upgrade.