Vintage racing is probably the most glorious form of motorsport you will ever set your eyes on.

There’s a reason why you’ll catch me at nearly all of the large vintage-themed gatherings that take place up and down the US West Coast. But I must admit that being around this stuff so often tends to leave you feeling a bit spoiled as time passes by.

I say this with sincere humility, but it’s becoming quite normal for us from California to be surrounded by millions of dollars’ worth of cars at a time. The exclusivity is nearly obsolete here, because, well, the culture itself is utterly vast.

While strolling through the paddocks at Sonoma Speed Festival, I found myself wondering what cars would be significant enough to spotlight. Surely every car in attendance probably had some sort of Gatsby-like story to tell, but doing 300+ spotlights just isn’t feasible.

More often than not, the cars I’m after at these types of events are generally considered irreplaceable. They don’t necessarily have to be the most expensive or the most sought after, but rather, special enough to truly leave an impression on not only myself, but more importantly, the owner.

That being said, there was a particular car – which I hadn’t recalled seeing before – that immediately caught me off guard. When I heard the story that paired along with it, I knew right then and there that this was the most special car in attendance.

Sandra McNeil and her husband Jim have been vintage motorsport enthusiasts for over 30 years. Their romanticism towards the culture is what initiated their first encounter back in 1983, when Sandra walked over to Jim at a party and began small-talk over the then new Ferrari Testarossa that was being released.

She recalls, “It was the start of the best part of my life,” and it’s this very same passion that has fueled their fruitful racing pedigree in the years that followed, alongside their lifelong commitment to one another.

Though the McNeil’s business and investment ventures served towards a promising future together, nothing would couple the pair more than their genuine passion towards collecting and racing vintage race cars.

Amongst their collection today is cars like a 1963 Competition Cobra 289, a Cooper Monaco T49, and most notably, the #11 1962 Ferrari 250 GTO. This is probably the last of the survivor GTOs, still wearing its battle scars and original patina.

Jim has owned it since 1967, so it’s safe to say this car is considered priceless to any Ferrari aficionado. But don’t get it twisted – the car’s value has never been a deterrent for the way Sandra drives it. Jim explains: “She’s tenacious. You don’t want her behind you. She’s thinking, ‘I’m gonna get you’.”

These are thoughts that I witnessed first-hand trackside.

With the pre-grid call for Group 3 echoing over Sonoma Raceway’s loudspeakers, I carefully watched Jim, Sandra, and their mechanic prep the car for the race. They were surrounded by a large group of other photographers, friends, and spectators as the character-wearing GTO left their tent.

Ironically enough, the McNeil’s GTO is the one Ferrari that seemed to stand out amongst its peers, even though there were a couple of other mint 250s near by, which included icons like a SWB car and a TDF. In any other setting, these cars would’ve been crowd-winners without a doubt. But it was clear that the crowd was rooting for Sandra.

The survivor GTO took to the line-up, and with visible concentration in her eyes, Sandra began hunting down the boys. Her driving style was exactly how Jim described it, as I watched her gunning down 356s, Mustangs, and other Ferraris through numerous different apexes and straights.

In the midst of the action, I couldn’t help but think of how significant Sandra truly is in the realms of vintage motorsport – or motorsport in general for that matter – being a female in a sport that’s predominantly filled with males. That’s a factor that the McNeil’s have accounted for over the years, and I can confidently say, she definitely shows the boys up, and its totally awesome to see.

With Jim’s commemorative expertise on historic race cars and Sandra’s fierce competitiveness, the McNeil’s are what I would consider the true testimonial to what vintage motorsport is all about.

They showed up, they prepped, they raced hard, and they couldn’t give a damn about anything other than sheer driving pleasure and joy out of doing what they loved, together. And they did it all in one of the most iconic and priceless race cars to ever exist.

This ladies and gentlemen, is what the passion is all about.

I would much rather read stories like this over stories of the newest Instagram build who """"does it for himself and not for others"""".

Considering the GTO was purchased in 1967, it was an obsolete and no longer competitive car that would have been scrapped. He may have spent $2000-$3000 in period for the car. It's just "lucky" that it is now worth ~$50m today. Don't see how that passion for 52 years has anything to do with current wealth.

If you earn above the median income in the 1st world, you belong to the richest 1% globally

Everyone loves trolls who act like a jaded 14 year old. Thanks for making useless comments about how much you don't care about something.
This site would be boring if it was only Civics and Golfs because those cars are attainable and cheap.

Out here acting like you didn't have posters of cars you'd never be able to afford all over your bedroom. Like you've never lusted after the toys that people in the 1% have. Like you've never made comment about how they just buy them to let them sit and appreciate in value.

But here's someone slinging a multi-million dollar poster-on-the-wall-dream-car just like many of us have always wanted to do, but never seen. And you're going to pretend to be apathetic.

I didn't know the 1% weren't allowed to tell their stories...

It's not about being the "1% being the 1%". It's the story behind the 1% that makes what this article's about.

On one hand im so glad to see cars that are meant to be driven being driven on the other hand there is so much wealth dripping out of these photos its hard to feel connected I agree. That 250 is gorgeous though.

Awesome, its much better to see these being used as they were intended than stuck in a collection and only brought out for concours events

Fantastic! Great story and photos, and happy to see these cars used and not collected as a means to make a profit or simply show off at a cars and coffee meet.

This ladies and gentlemen, is what the passion is all about.

Man, that would have been quite a sight Naveed. Owned since 1967 and properly raced every single one of those years like it bloody well should be. What a cool couple to run into and spotlight. Great article.

Wow. That couple may be the ultimate car people. Isn’t it funny that a nun restored GTO that gets used may be the most valuable of them all? There’s a lesson there, I bet.

Sincere question: Why did Ferrari continue to use wire wheels?
The Borranis look great, but by the early '60's why hadn't Ferrari transitioned to stiffer and lighter magnesium or aluminum wheels, like everyone else? Was it because the Borranis were also made in Italy??

Because in the 1960's wire wheels were still considered the ultimate in strength and lightness. Magnesium alloy wheels, or "mags" as they became known, were new and exciting, its true, but the metallurgy of the time was still in its infancy with that metal and with alloys. While mags were slightly lighter, they were also more fragile and prone to shattering or cracking when they hit a pothole or curb. Steel did not have that characteristic. These cars were primarily driven on street circuits, which had potholes, curbs and cobblestones in abundance. Obviously a risk for a more fragile wheel, so steel was chosen, especially as its not much heavier than the mag alloy of that time. Hope that helps.

Beautiful car! And an amazing story to boot! Thank you!

LOL, Naveed got fooled. This car is a replica. The real 250 GTO's have aluminum bodies. This is obvious fiberglass

Yes!! And its sibling was by far my favorite care at the ACM rally that I randomly stumbled on this weekend while visiting Monte Carlo. 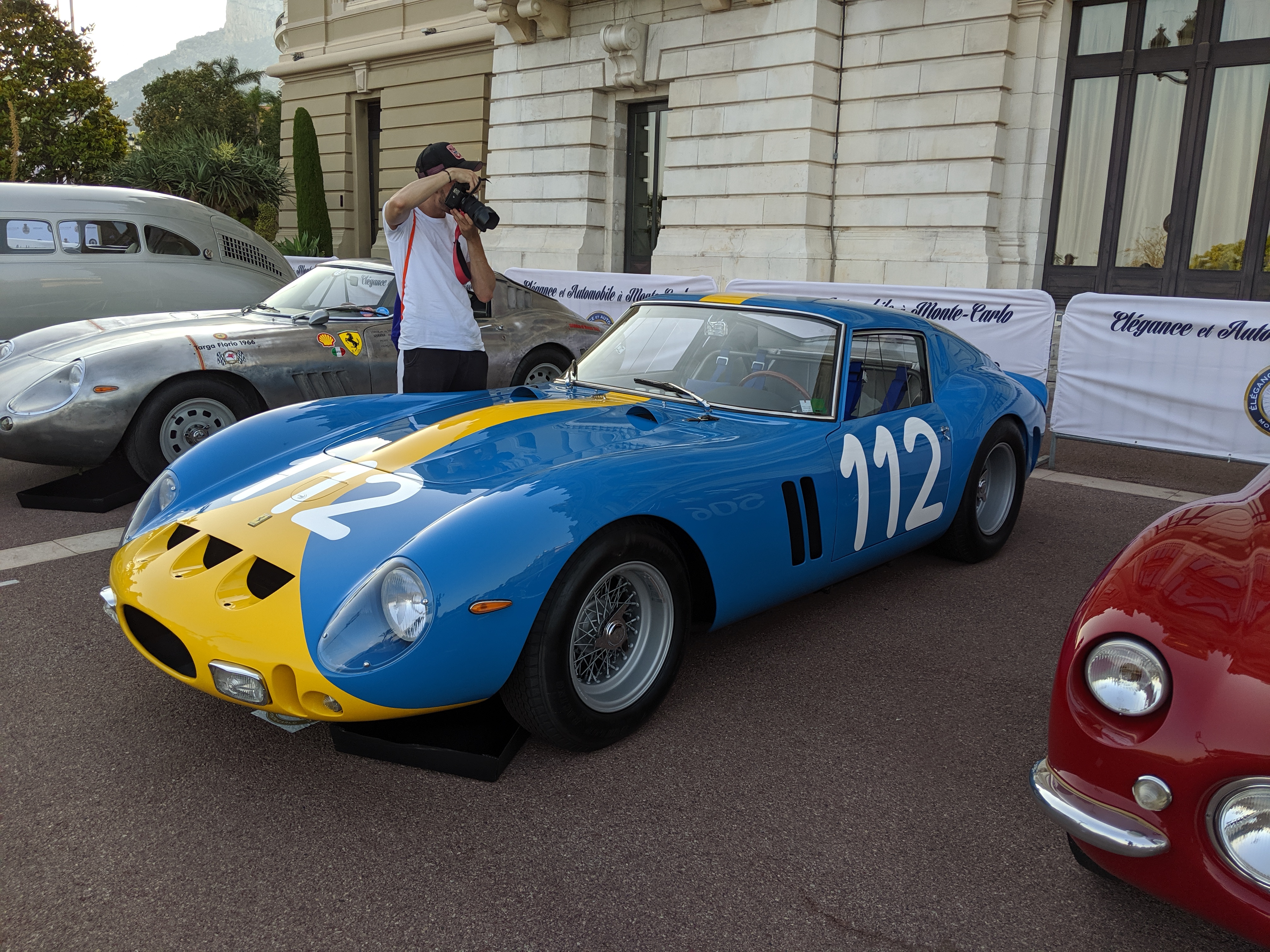