As I was strolling around the Golden Week Kyusha Festival a couple weekends back, I wasn’t surprised to see a modified Datsun 2000 Roadster in attendance. Perhaps more than any other model, the original Fairlady is the epitome of an old Japanese sports car.

The DNA of the Fairlady (or Sports) 1600 and 2000 Roadsters goes back over six decades to the Fairlady 1000, originally designed by Yuichi Ohta in the late ’50s. The S211 only saw production of 20 prototypes, and it wasn’t until 1960 that the Sports 1200 was imported to the US (still, less than 500 were built). By the late ’60s, the car received major updates in every category, featuring a 2.0L U20 engine good for over 130hp paired with a proper 5-speed manual. You could also opt for a Competition package which produced nearly 150hp, thanks to a reworked ‘B’ camshaft and a pair of Mikuni carbs. Weighing in at around 950kg (under 2,100lb) the car was no slouch.

While it was quick and well-sorted – even compared to a ’90s entry-level sports car (think Miata) – I’ve never really given them that much attention. They always just look a bit too small, a bit too dated.

When I saw this particular 1967.5 Roadster at the show, my initial impression was that it didn’t look dated. Instead, it looked as though it was set up to go fast, and it also looked a bit familiar at the same time. But what was this car hiding?

It turns out the car was hiding quite a lot, namely an ’98-spec SR20DE capable of roughly 180 horsepower at the crank. Remaining naturally aspirated and matching the displacement of the original late-1960s cars, the swap is a really cool and fitting addition to spice up the old chassis.

The massive-looking 16-inch Panasports tucked into the cutesy bodywork, the period trim-work in the interior paired with a Momo steering wheel, and that SR20 up front — it all works.

This is Alvin Gogineni’s Roadster, which he’s owned for nearly 20 years. The swap was completed in the early 2000s and the suspension details buttoned up more recently around 2010. All in all, it’s a Fairlady that seems to have been done right the first time around — little has changed as the years roll on since its completion.

It’s also a car that’s had the spotlight shone on it many times, but I’ve yet to see it featured on a good canyon blast.

I know Naveed is good friends with the owner, so who’d like to see that remedied?

Absolutely stunning car. The sr20 looks at home under the hood. Only thing I would change is put on smaller wheels. Nonetheless it looks immaculate

Dude! Get it on the backroads!

I thought this one looked familiar. LOL!

Strangely familiar haha it's cool to see a car which isn't continually modified for whatever is popular at the moment. Never seen a feature of it in action though - I'd love to know what it's like at speed.

Perhaps this is one of those rare project cars that are truly complete. Hahaha!

ITB sr20ve would make it impossible to ever take it out at Laguna Seca again, and I know Alvin enjoys that..

I have never seen it driven either...lol

Actually, it's probably in the top 10 driven roadsters around. If you went to the "where did you drive this weekend" thread on the roadster forum, you will see photos of it on Laguna Seca, or Hwy 9 or Skyline Dr, or going up to the mountains..

Yep, never said otherwise. Updated the text to clear up what I meant.

Its funny, I went back through my pictures looking for shots from the canyon runs I have done with Alvin, and could not find pictures. I guess we just did not bother to stop and shoot them. I will often stop to get a picture of my car when I am alone, but we were just having too much fun to stop.. 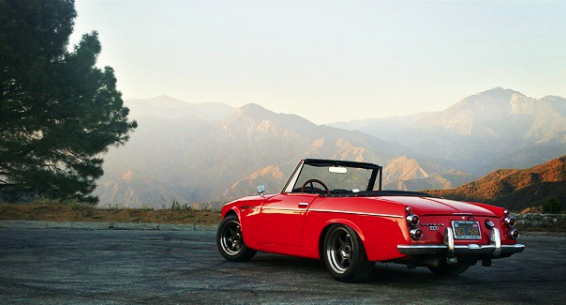 I absolutely LOVE Alvin's car. Although it looks the part, Alvin's car isn't really a show car. He DOES drive it. In fact, I know he drove it 40+ miles to work the other week because I personally saw it in our work's parking lot. This past November we did a 100 mile drive up in the Santa Cruz mountains. It's been his track car (big wheels for big brakes) and even his daily driver for a while. Alvin is also one of the nicest and down to earth people I've met in the car community. Alvin - let's go on another drive soon!

Oh, I know it's definitely driven, I just want to see good photos of it happening! None of the many features on this car, at least the ones I've seen, have been on the backroads it belongs.

Just wait until you see it on a canyon road first hand. It's no stranger to the Skyline boulevard scene or Alice's.

I've been on a couple fun runs with Alvin and there's nothing slouchy about the car. He's also been a regular at Laguna Seca track days. It's one of the few cars out there built to be driven (and is driven), but still looks show car clean on any given day.

As mentioned below, he also uses is as a commuter on occasion. I remember coming back up from school, on the Central Coast, on more than one occasion and seeing him rolling down 101 or 85 in the bay on a weekday. You can spot that car from a mile away because it just sits so right going down the road.

Lol I know it's driven a ton! That's the point of this car. I just meant that I've seen a number of articles on it over the years but never one which takes it out on a canyon road and captures it there.

This roadster gets driven a lot actually. Definitely not a trailer queen.

Oh boy, I updated the text to clear up what I meant lol

They really need to bring this back as a friendly competitor of the MX-5.

Though this is Nissan we are talking about, and disappointment is their business model.