Great sports have always been synonymous with great rivalries and motorsport is no exception.

The skirmishes may vary in scale, but never in the passion they inspire.

Regardless of whether it’s the rivalry between two manufacturing juggernauts like Enzo Ferrari and Henry Ford, or the traffic light skirmish between two daily drivers in opposing brands – competitiveness is always there.

To hazard a guess, I’d estimate that no less than every third Subaru WRX STI owner tries to blitz me off at the lights when I’m in Project Nine, and always after a prolonged attempt to send me deaf with their rev-limiter, and almost always while vaping.

I get it, mate, it’s a boxer engine and it sounds 99.999% identical to every other WRX, Forester, Legacy, and Outback on the road.

Does this bother me? Not at all. Well, not outside of the inane revving. In fact, regardless of whether or not I take the bait and play along or just casually cruise home, these playful encounters always seem to boost my spirits and leave me daydreaming about pursuing big power and lower quarter-mile times in the Evolution.

If you’re like me and have ever wondered what it might be like to take that motoring rivalry between brands to the next level, prepare yourself for the Tuners Edge Drag Battle, owned and run by Motive Video. An event where unlike my own tragic street tale, is packed with owners and cars that really do push the limit of what’s possible for each of their respective marques.

Where the GT-R Challenge is all about, well GT-Rs, its accompanying event, Drag Battle, is open to all makes, models and drivetrain combinations. The only prerequisites are road registration and some verified numbers to prove you’re ready to play with the big boys.

If there was one place to well and truly sort out who the real street king is, it has to be the rural runway at Cootamundra. For a decade now, the one-kilometre-long runway has been a playground for some of Australia’s fastest cars.

Twenty-six entrants would go head-to-head in essentially the Australian street car drag racing equivalent of the WWE Royal Rumble. Evo versus WRX versus RX-7 versus MR2 versus Silvia versus Falcon versus Ford Territory. That’s right, even a 10-second soccer mum SUV was in the mix.

Welcome to hardware heaven, a place where no expense is spared, no shortcuts are taken, and not even the slightest whiff of moderation is to be found in the pit area.

Talk here is worthless; it’s all about horsepower and time slips at Cootamundra.

Taking street rivalries to the next level may just be a daydream for the majority of us, but not to all. Standing amongst it all at the Tuners Edge Drag Battle, the sights, sounds and smells of it all are way more visceral than my imagination could have ever allowed.

It’s a relatively small event, but it’s packed with very heavy hitters. Let me tell you one other thing about it – it’s f**king glorious.

If You Weren’t Already Told, You’d Never Ever Guess

8.84-seconds at 270.22km/h (167.91mph): For the first time in its 10-year history, Drag Battle’s front runner had broken through the 9-second barrier on the rough old runway. Fast enough for the winner to also pocket an additional Australian $3300, via the 4-cylinder 8-second bounty offered by Motive and sponsors.

But who and what type of car was responsible? The most obvious answer from the fleet would be something that grips with all-wheel drive, like a WRX or an Evo of some description.

But if it were a two-wheel drive, it’d almost certainly have to be a Supra with a monster million-horsepower 2JZ under the hood, right?

Perhaps a Barra-powered R32 Skyline had what it took?

Could a Honda K-series engine swapped into a Toyota MR2 blast its way into the 8s?

Perhaps something a little more home-grown took the title?

All is revealed in Motive‘s Tuners Edge Drag Battle overview. Hit play, sit back and enjoy some of the fiercest Australian street cars battling against each other, the elements and themselves.

And when you’re finished there, be sure to check out the mega gallery of what was an epic weekend of racing.

More Stories from Australia on Speedhunters 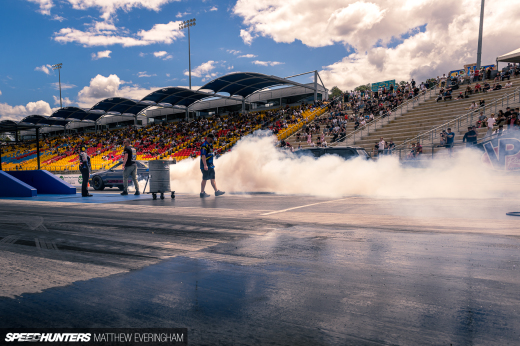 The Barra is a good engine. Shame the Falcon/Territory didn't last that long with it.

Great write up and pics!
Not sure of your thinking regarding a how a 2J or Barra engine might have been the winner of the 4-cylinder 8-second bounty though.

The 4-cylinder bounty was different to the overall prize.
Perhaps I should have clarified a bit more.

Nah its all good. Its a great piece.