If you’re not from South Africa, you probably wouldn’t have heard about the Jaguar Simola Hillclimb before. It’s worth me introducing it to you though, because this really is an amazing event.

There’s just something about classic and historic racing that gets me all excited. Seeing cars from yesteryear being driven in anger with maximum driver input and a lack of driving aids is one of the best things ever.

At this annual event, which takes place in Knysna, South Africa, you get a fix of this and a whole lot more.

Originally known as the Knysna Speed Festival, the 2019 running of the Simola Hillclimb marked the 10th anniversary event, and the fifth since Jaguar South Africa came onboard as the title sponsor. The hillclimb grew rapidly between 2010 and 2012, and is today one of the most highly anticipated events on the South African motorsport calendar.

A Decade Of Petrol Fumes

The hillclimb takes place on what is usually a public road, which leads up to the Simola Hotel. Months of preparation work goes into the event, with the 1.9km (1.18mi) stretch of road lined with safety barriers, grandstands constructed, live streaming equipment installed, pit tents erected, and of course the all-important timing system set up.

For three glorious days the hill comes alive to the sounds of tuned engines being pushed to high RPM, and even though watching the cars race up the hill is epic, pit lane is one of the best places to be.

For this year’s Classic Car Friday, which happens on the first day of the event, there were 65 entries in total. The variety of cars that came to compete was pretty amazing.

Porsche In The House

It was no surprise to see a large Porsche contingent at the event – they are such amazing cars to drive and even better to race.

Dutchmann, whose 912 we recently featured brought their 911 ‘Weekend Racer’ along for some spirited driving. There was also a 924 and 944 Turbo, a Martini-liveried 911 RSR, as well as another Martini 911 RSR with a turbocharger.

I can’t forget the pretty sweet-looking 911 RSR Outlaw and two 911Rs (one being a replica) either. One thing’s for sure: most of the Porsches were pretty damn fast and all sounded amazing.

Just as interesting as the cars are the drivers, some of whom have been racing for a long time. I love seeing the camaraderie as people share stories about their cars, their racing over the years, and who knows what else. The way these guys prep for their runs in the pits is also a lot more relaxed than what you’d usually see with those who race the modern stuff.

Of course, the proper historic cars won’t be setting any records or even getting people excited with their breakneck speeds, but they are beautiful to look at. At this year’s event there were a few MGs, an Austin 7, and a Riley amongst others. Most were in pristine condition.

Minis were also a popular choice this year, with one guy turning up in a ratted-out example that looked pretty damn cool.

Then there were the big-boy cars, like this Capri and the maddest and loudest Opel Rekord you’ll ever see. The latter is owned by local racing legend Willie Hepburn, who we did an interest piece on recently.

These two BMWs were also super-popular amongst the crowds. The 3.0 CSL did burnouts on the start line at every opportunity.

The open-wheeler and single-seater category is always a thrilling one with some really exciting stuff. The most enticing cars here were definitely the black Lola T460 which runs a Cosworth BDD 1,600cc motor, and the two Chevron B19s also running Cosworth engines.

With the pits thoroughly explored, it was time to check out some racing to get the adrenaline flowing properly. Check back soon for the hillclimb action. 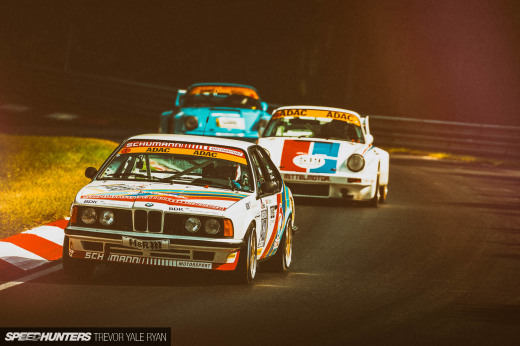 I love this event . Its gotten way better since jaguar came onboard their supercharged 5 litre’s sing a sweet song. The classic aspect is cool cause some of those toppies know how to pilot

Yeah they've definitely brought some good stuff to the event in terms of cars and marketing. Yeah these old guys are legends man!

Amazing pictures! thanks for the sharing

Thanks Gavin! Your car ain't bad either, haha

Oh man! Was watching this on their live stream all weekend! Serious FOMO issues were dealt with! This has been firmly added to the not to be missed diary for next year!

The live stream has really made it awesome for people that can't attend, but you definitely have to come experience it in person!

Great photography of what looks to be an amazing event.
The variety of cars really makes one appreciate all the technologies, economics & philosophies of the different marques.

Thanks Gary. So easy to capture these old cars as they all have so much character!

Thanks Leon, appreciate it!

I am always shocked that this kind of stuff happens in Africa!

Might be worth a trip to check out the place overall.

But nothing comes close to our car scene here in SoCal!

To give you and idea, we're a pretty small place, but there is already 4 McLaren Senna's here, and another 2 on the way. Landed here they're about 2 million USD.

I know right! First time I'd seen one in real life!

Would love to attend this event. Looks Awesome! Too bad I'm on the other side of the globe.

Come on over, it's only a few flights away