Deep into a rabbit hole of Nissan and Datsun enthusiasts is where you’ll find a small sub-segment who find their vintage Japanese fix within the realms of a little car that can do a lot of damage.

It’s odd, because when I think of vintage Datsun/Nissan racing pedigree, I automatically think of the 510 and the 240Z. These cars obviously became the face of the brand with their incredible racing success in era, but the precursor to the Fairlady name and its association to the long hood and sweeping rear hatch of the Z was actually a well-equipped, sporty roadster.

Once a year, these odd-ball Fairlady Roadster enthusiasts gather in a small California city called Solvang for their annual meet-up. People from all over the West Coast make plans months in advance to show their faces amongst their peers and new friends.

Alvin, whose car Trevor just did a spotlight on, just so happened to be in contact with a certain individual who was making his trip down, and thought it would only be right to send some kind words about the gentleman my way. On that tip-off, I made it a point to stop him en route for this story.

Eric Straw, a name that might sound familiar to long time readers, turned out to be just the type of person Alvin mentioned he would be. A kind, soft spoken giant, who happens to find his niche in custom metal fabrication, right alongside a meticulous eye for attention to detail.

As Jordan described it best in Eric’s DR30 Skyline story, “I did not know where to start.” He literally took the words out of my head and put them down on the site, two years ago.

At first glance, this little Fairlady Roadster retains its factory appearance, following the same ethos Eric ruled his cars under many years ago, and one that formulates to work out in his favor time and time again.

But after discussing the hundreds of man hours that went into the development of this car, being that this is its second restoration since Eric’s ownership and all, I soon realized that yet again, it’s what’s hidden underneath that counts most.

The car started out as a 1969 Datsun Roadster that underwent its first round of restoration around 2007, where it was acid-dipped to bare metal following a full frame-off rotisserie revamp. It was originally built with a full S13 Silvia SR20DET power plant, Comp springs, 300ZX brakes and other miscellaneous goodies.

For most of us, that would’ve been enough to call it quits with the whole ordeal, and proceed with further enjoying the car for years to come.

But obviously Eric is not ‘most of us’ in this sense.

Eric’s building methodology comes with a certain criterion that he holds himself against. It’s one that pushes his own boundaries and limits to create something that finds the fine balance of modern and classic, with a few hints of Eric’s own personal flair.

And after years of building customer cars as well as cars of his own, he felt it was only appropriate to incorporate the new knowledge and engineering tactics into this specific Roadster. So what better way to do it than starting all over again, on the same car…

He sold off the power plant and drivetrain, and started off with a blank canvas. The body of the car was removed, and Eric’s sculpting art began. Starting with the body, the floor pans were modified to accommodate Eric’s size – as I mentioned before, the dude is a giant, and I genuinely don’t think he would fit in the car without lowering the actual floor.

From there, the frame was heavily modified to accommodate for the new and updated power plant, suspension, and drivetrain, following a fresh coat of semi-gloss black powder-coating.

Once the frame was completed and ready for body to be mated to it, Eric went ahead and started reassembling the car.

The interior retains the original look, however, the classic-looking instrument clusters are new, the seats are out of a Lotus, and the entire wiring harness and assembly have been fully restored.

As Trevor mentioned with Alvin’s story, seeing these cars in bone-stock configuration can sometimes portray a sort of outdated look. But it’s never been something that a simple set of wheels couldn’t fix, so the happy-medium choice was a set of RS Watanabe RS-8s.

For Eric and many others – myself included – wheels are believed to be what make or break the exterior aesthetics of a build, so calculating the perfect offsets, sizes, and tire measurements are absolutely critical to get down just right.

Upon my close-up inspection, I realized that Eric was running some of the widest tires I’ve ever seen on a Roadster without body modifications, being 245mm in the rear and 225mm up front. And I was about to understand why he went this route.

As Eric opened the bonnet, I could hear the glory music playing in my subconscious. Although the chassis alone is quite impressive, it wasn’t until I saw the motor that I genuinely felt awestruck.

What started out as a Tomei-built SR22 taken from an S14 has resulted in what the motor is now – a fully built SR22VET with forged internals, a massive GTX3071R Garrett turbo, all the fueling needed to make generous power (which is estimated at around 500hp), and of course heaps of custom fabricated bits to support the Roadster going fast without compromise.

Although we obviously can’t get a glimpse of the internals and mechanical aspects that make the motor as glorious as it is, we can get a view of its beauty from the outside, where dress-up bits coincide with the meticulous attention to detail Eric is known for.

After discussing the Roadster with Eric and sorting through the photos when I got home later that day, I realized that this build goes a little deeper than just another car to pump out of his shop.

Eric mentioned that his father is the reason why he’s become the Datsuholic he is today. Although his father was primarily building American cars throughout his restoration saga, Eric was somehow intrigued by the boxy shape and lightweight design of the 510. It was something that was never understood within the kin, but also left unquestioned and fully supported by the family over the years.

Since then, Eric has built numerous vintage and classic Nissans/Datsuns, receiving guidance and mentorship from some of the best in the industry, with opportunities to build some seriously epic cars. But this little Roadster has seemed to find its way into Eric’s heart for the long run. 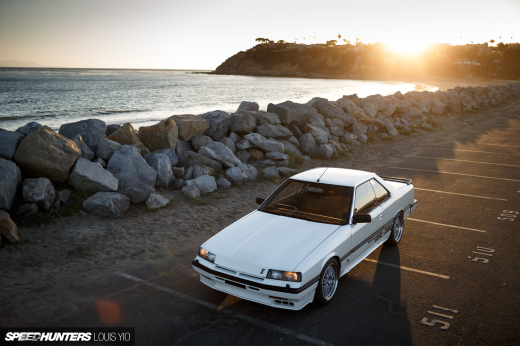 It Was Acceptable In The ’80s

Woah. This thing is incredible.

Amazing car! Also, is that a VE head on the SR? Or just the Rocker Cover?

Correct, I've made the correction in the post as well. thanks!

with 500HP, I wonder how it drive considering it is a small car.

Everything is tidy and clean, I see craftsmanship here. (especially that front end!)
With a whopping 500 hp in such a small car, this will absolutely put a HUGE smile on my face.

this car is SO awesome...
how did he get that turbine housing like that?

I'm loving this thing, and there's so many things I'd like to have more details on.

That interior is confusing me though. Looks like it's from a low windshield version, but it's a tall windshield body. Never seen that done but it's awesome. The earlier cars had by far the nicer interior.

It's amazing how well it all fits too. It's such a tiny car in person. Low and narrow, but fairly long.

Note to self: drive my srl311 more often.

Are those Brembo brakes taken from another car, or off-the-shelf catalogue parts?

I truly don't understand why you would upload an article like this. This car... Jesus...

Stunning. In all ways.

All that chassis work just to put an sr swap, meh

As Eric's DAD I am so proud of what he has been able to accomplish on this fairlady. Seems just like yesterday when Eric started working on his first 510 over 20 years ago we dragged home from a farmers field in North Idaho. Again well done and look forward to your next project. Dad

This is an amazing job, so clean and perfect. This is a dream car. Thanks for uploading this article

whoah. What an engine bay. It's so tidy everywhere.
one day

A car that isn't an aired out ego trip with riveted on fenders and a all-show-no-go demeanor.

Anybody with a big wallet can drive into a professional shop, order some wheels, and have a project they contributed nothing but $$$ and a signature into.

We need more builds like this. Yes, BUILDS, not 20in staggered wheels on a re-painted LS1 240sx built at a custom shop.

Where is this guy shop I have a fairlady project ?

Where is the shop located pls?

What's the shop location I have one on my own project?

Okay I've been checking things out here since 2013, and this goes into my top ten builds ever. Wow, for me it's just right. Not outlandish looking and so svelte.