Honestly, I didn’t really know exactly who he was, but I knew he was sort of a big deal. When you’re an (extremely sheltered) 11-year-old, though, you don’t really understand the magnitude of star power. There were at least three body guards in the restroom — one who I swear I remember Mr. Tyler calling ‘Boopy’ — when the lead singer of Aerosmith and I approached the singular urinal at the same time.

We looked at each other, I gesfcinetured for him to go ahead, and he said: “No really, man, that’s all you.” So I peed, then washed my hands as Mr. Tyler stepped up to the urinal. I distinctly recall the odd atmosphere in the bathroom. Why were all these guys in black suits hanging out with this dude in here, anyway? And why were they all staring at me?

Steven Tyler and I exited the bathroom more or less together, exchanging a few words as the crowds in the restaurant pressed themselves against the walls to make way for the Demon Of Screamin’ and his posse — and me, too, of course. I seriously had no idea what was going on, but Steven Tyler invited me into his limo, and my parents grabbed their camera loaded with some random early 2000s Kodak film.

They snapped a singular photo, the first of the roll. The only problem being that the first of every roll on this particular camera turned out entirely black, less the date stamp. Mr. Tyler urged them to take another, but my parents insisted we’d taken up enough of his time. They did get one other shot of Steven himself getting back into his limo a moment later, one which was slightly out of focus and featured a lot of motion blur thanks to a too-slow shutter.

So, this lackluster second photo is all I really have to corroborate what happened. But I swear it did. Seriously.

This experience — and the subsequent disappointment upon realization of whose limo I was in and the fact that the singular shot we have was actual garbage — has stayed with me since my pre-teen years.

Film is volatile, fragile, inconsistent, and not to be trusted.

So, shooting two events on film last weekend was a bit nerve-wracking for me, as I handed over the lion’s share of digital duties to Sara. If these didn’t turn out, I would really have nothing to show for a weekend-worth of work on my part. That would suck, royally.

Almost as much as having to tell people the only photo I’ll ever have with Steven Tyler turned out pitch black — I swear. Or maybe more, actually. Unlike when I was 11, I do have to pay rent and that sort of thing.

Luckily, all was well, and I was rewarded with a couple rolls’ worth of useable content from the Golden Week Kyusha Festival. These first shots were taken with Kodak Portra 400 during setup, finishing off a half-spent roll I started at Laguna Seca the day prior.

As I said in my preview of the event, the light and atmosphere the Craneway Pavilion brought was absolutely perfect for a morning full of Japanese classics. Props to the organizers for landing such a fantastic and fitting venue.

A few people even showed up in period-correct attire, and like Sara I couldn’t help but sneak a few shots. This happened to be the last of the Portra 400, and I popped in something from Cinestill.

For the first time, I opted for some 35mm Cinestill 800Tungsten. I have to say, it was a choice well made for this event, and a film I’ll need to use far more of in the future.

It’s always a bit tricky to balance being creative and having fun while producing something useful coverage-wise, but I think I’m finally getting the hang of it. I hope you enjoyed this imperfect and grainy analog look through my camera at the Golden Week Kyusha Festival, and I’ll be back with one more 35mm gallery as soon as I see the scans.

It really wasn’t a big deal.

More Stories from the Bay Area on Speedhunters 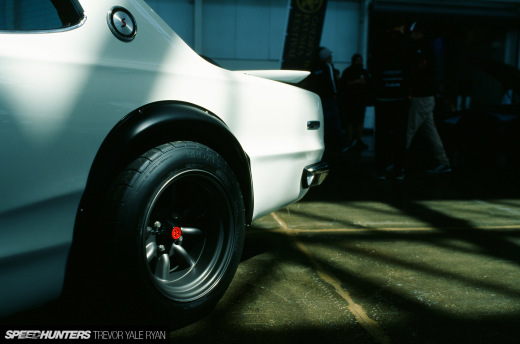 The SR20 Datsun Roadster Lives On

i love that little orange 510 on equips

What happen with the yellow Starlet KP 61?

Too many good cars for one gallery, which is why I'm dedicating a few short stories to the show. I think Sara grabbed a shot, and honestly I do wish I got more, it's an awesome build.

You got pictures of the runner and hurt pickups but not the UZ pickup ? Wow

There was lots of cool stuff there and I had a limited number of shots. I got it on digital and Sara's story should be up soon.

Don’t sweat it bud. If we somehow get the chance to cross streams lmao. We have a sharpie for you to mark up the engine bay.

Excuse me, did you know the name of the white KPGC110 here? Thank you in advance !!!

Sorry, I would juste to say the rims of the white KPGC110

Those are Fatlace FZERO 02 made by AME wheels.

Yes more analog shots please!
Really suits the occasion as well. It also brings some new spice to this website in my opinion. So keep 'em coming Trevor!

Yeah I thought this would be the perfect place for it! I had to mail my ektachrome off so I'll have one more 35mm gallery as soon as I get that back. And I shot a couple rolls at Laguna Seca too which should be up soon..

Awesome! Ektarchrome is nice too.
I‘m dying to get my hands on a roll of Kodak Aerochrome!

oh my. so beautiful.

Oh, how I truly hate Cinestill films. So expensive for what you actually get. The bummer is that fast color films just do not really exist anymore. If you were shooting it at box speed (800), Pushing Portra 400 to 800 would have given some great results for less cost. You should place an 85B (Orange) filter on the lens for daylight shooting tungsten balanced film. 800T is really good in dark, evening shooting.

I appreciate seeing the film stuff though.

I also shot a roll of Ektachome 100 which you might enjoy more. I'm waiting to get back from the lab, everyone had a 1 week turnaround for the E6 stuff. But anyway I really like the character of the sort of aged/cross-processed look especially for a show like this so I went with the Tungsten here. But trust me, I entirely see the irony of purposely getting technically worse images. You have to live a little bit...

Shooting P400 @800 gives a better color palette and a bit more contrast than P800 does. P800 is kind of flat and pasty with more grain. Pushing 400, and developing it normally or with one stop in development, still gives tighter grain than P800 will.

The Cinestill stuff just seems so varied and the grain is pretty pronounced. Massive color shifts as well. It has always bothered me a bit.

Cool, that's good to know. I feel you as for the Cinestill, but I think that's sort of the point. I wouldn't use it to take photos of the president, but it has it's place.

Beautiful! Thanks for sharing this!

awesome photos, my friend! also, I just remembered seeing Nicolas Cage at a shopping center by State Street, in Santa Barbara. and then he was gone in 60 seconds. lol awesome coverage man!

I like the look of that Tungsten stuff. Reminds me of the way Bruce Lee movies looked like.

I've been curious about the way people in the Bay Area dress these days...like those two awkwardly dressed, 90's-themed dorks. That's what we called people that dressed that way back when that still didn't look good. Call me Judgmental, or maybe a meathead, but I don't get dressing terrible on purpose. Do people dress that way in other places, or are we blessed with a weird variety of people-watching entertainment?

Some people row to the beat of a different drum. I'm sure you do things that some people wouldn't understand. Just roll with it. You don't have to try to understand why people want to stand out, no matter what their reasons are. Some people like to be different in the way they dress, and the way they build their car.