Optimism was abundant in droves, excess was the norm, money talked, louder was better. Even by the standard of the time, and in recipe form, the BMW M1 Procar Championship was a mouth-watering proposition.

Convert enough BMW M1s into fire-breathing naturally-aspirated 470hp inline-six-powered race cars to fill a championship, plonk some of the world’s best Formula One, World Sportscar Championship, European Touring Car Championship, and other noted drivers in the seats, and pit them against one another at racetracks around Europe.

It sounds like a magnificent idea, and it was.

The championship was held during Formula One events around Europe, and with all of the M1s built to the same specification, along with a dream roster of top-tier drivers, the racing was close and fierce – Lauda, Piquet, Andretti, Fittipaldi, Hunt, Lafitte were just some of the names emblazoned across the M1’s sunstrips.

In its road-going form, the BMW M1 was interesting enough, certainly for a BMW. It was developed between BMW and Lamborghini (and later Italengineering), and features a mid-mounted 3.5-litre M88/1 with independent throttle bodies, nestled amidst a tubular space-frame chassis. Of course the Procars bared little resemblance to the road-going M1 by the time they reached the circuit.

They were wider, with extravagant wheel arches covering monster-width centre-lock wheels and tyres. Deeper front valances scooped up the air at the front, whilst an adjustable rear wing provided downforce behind the engine.

Where the road-going M1 boasted 277hp, the Procars spat out 470hp at 9,000rpm. They were wide, wild, loud and spat flames upon request. Procar was a huge hit with motorsport fans around Europe.

In my opinion the M1 Procars, complete with their very-much-of-the-time liveries and sponsors graphics, remain one of the best-looking (and sounding) sports cars of all time.

Sadly, the Procar championship was short lived, lasting just two seasons, from 1979-1980. BMW Motorsport’s resources were piled into Formula One, and the M1 Procars were sold off – many ended up in the Championship for Makes as well as other national series’.

This year’s Goodwood Members’ Meeting saw five original M1 Procars take to the circuit in procession. If you were there, then I don’t need to tell you how incredible it looked or sounded. Now imagine that, but in Monaco, at race pace and a packed grid of some of the best drivers in the world. 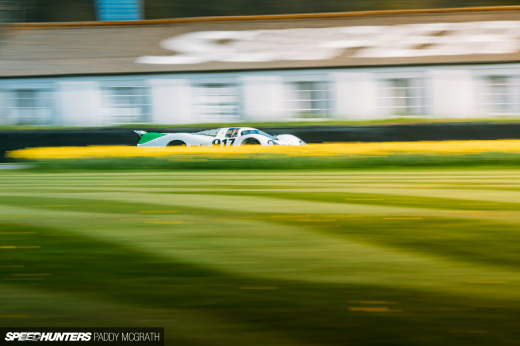 Paddy, these Members' Meeting photos have been the tits! Loving it!

It was such a shame that the series never got off the ground – a grid full of executive saloons from the 1980s with mid-mounted F1 engines racing around Europe? It have dreams like that.

DROOL! What a cover!

Paddy teaming up with Jordan, against 3 M1s.
EPIC.

I really enjoy the 77mm coverage and man is it nice to see an M1 being used as it should be!

I don't know why but I'm seeing a Ferrari in the shot from low slightly angled, at first glance I thought of a 308/328 Rally Car for whatever reason? Hi Hum

Is there a more beautiful race car? Is there a better sounding one?

I don't think so.