One aspect of car design that I’ve always found especially interesting is the image of future mobility that designers work into concepts. Especially those that have come out of the ’60s and ’70s, a time when many designers were experimenting with what cars of the future might look like.

Last month at Nostalgic 2 Days, there were two such cars right at the entrance – a display spot that’s always been reserved for surprise appearances from Japanese manufacturers. We’ve seen rarities from collection halls, and in 2018 a pair of Dome Zeros that I expanded on with a dedicated spotlight.

But this time around the surprise was bigger than ever. What we have here is a pair of Michelotti concepts – the coupe; a 1971 Matra Laser, and the four-door gull-wing hatchback; a 1974 Lancia Beta Mizar 4.

Both these cars live in Japan and seeing them at the show blew my mind.

While I have come across them before in old magazines and books, actually seeing them in person unleashed a ton of emotions.

The Mizar was based on the Lancia Beta platform and was designed to be a roomy and comfortable four-seater with the sort of elegance only Lancia managed to have in the era.

The first thing I thought to myself upon seeing this quad gull-wing door hatch was Tesla, eat your heart out!

Maybe this is where inspiration for the Model X was drawn from?

Here is a fully functioning concept from 40+ years ago, and it managed to integrate a gull-wing door for each occupant. Obviously the Mizar never made it to production, but that’s not the point – these cars were visions of the future, a ‘what if’ creation that made car enthusiasts think.

To see some of these solutions actually make it to production cars four decades later is the cool thing.

It may not have been a looker, but the Beta Mizar was different. And that’s what Lancia was always about.

But as cool as it may be, it also makes me sad. Sad that such a great and important brand like Lancia has been left to dwindle down into insignificance.

It’s also a great reminder of what could have been, and for this car in particular, how damn realistic and functional concept cars used to be.

The coupe, from three years prior and again penned by Michelotti in Torino, wasn’t a view into improving mobility, but a stylistic interpretation of a Matra sports car.

The Laser is the epitome of a 1970s Italian-designed concept car, a low-slung wedge, angular in its details and again beautifully realistic. By this I mean that you take one look at it, and you know it mostly all works and would be actually be viable if the decision to put it into production was made.

Like the F1 cars that won Matra the constructor title in 1969, the Laser was powered by a Ford engine. The 1.7-liter V4 sat snugly in the center of the Matra M530 chassis the concept was based on.

It’s pretty impressive how low the car stands, just over a meter high at its tallest point.

And then of course there are the big gull-wing doors that lift up on struts to reveal the minimalistic and plush interior.

Only one Laser was supposedly ever built. It was shown at the Geneva Motor Show in 1971 painted in a striking yellow color, and then again the following year at the Montreal Motor Show, this time in the metallic silver you see here.

You can see the bathtub-like design of the chassis, with thick sills to boost structural rigidity and create a wide, airy cabin with plenty of visibility thanks to the expanse of glass used on the massive doors.

It might be a great car to sit in and drive, but getting in and out might involve some awkward contortion given how high the sills are.

The seat design couldn’t be more in keeping with the era of the car; the front pair look like they were lifted straight from the set of A Clockwork Orange.

There’s an inherent simplicity to the rest of the velour-clad interior; it’s beautifully minimalistic with only a few gauges laid out in front of the driver. But then your eyes fall to something far too modern…

The Laser is a privately owned car, and seeing that it’s running a modern day Japanese navigation system, one can only assume that it actually gets driven on the road at times. As wild as that may sound, we all know that the Japanese aren’t afraid to make full use of rare cars in their collections.

It was a breath of fresh air being able to pore over these two Michelotti-designed concepts.

They really made me think about a very important era in car design, two brands that nobody talks about now, and of course the question – where will cars be in another four decades from now? 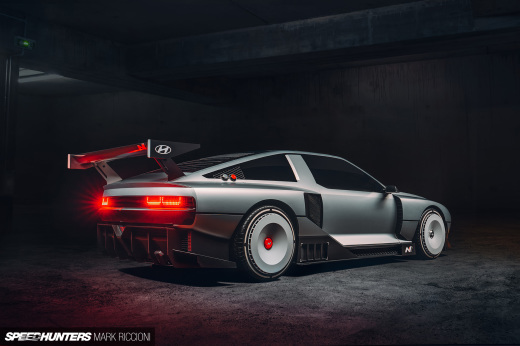 How Hyundai Became One Of Our Favourite Automakers

Please learn how to use a wide angle lens. Show some pride in your work.

Uhh we've got a pro™ photographer over here

I can only imagine how you felt, Dino! As a child of the 80s I LOVE gullwing doors, and I hadn't seen these seen poring over my Dad's old issues of Motor Trend, eons ago. Those were in black-and-white, and we may have gotten two shots of each car...but I doubt it.

My eyes zipped right to the tablet, but only because it looks surprisingly at home, form-wise.

The fate of Lancia has always depressed me even though I've always been on the Alfa side of things. It's been like watching my once-great uncle, who did loads of cool things and had all sorts of stories, slowly fade into dementia and alzheimers

Also, I think the best part of that Matra would be the view out the side while you're driving it (or riding in one to be safe lol). Since the car is crazy low, the sill is even lower, and the door is mostly glass, you'd be looking at everyone's wheels

cars will fly in clean fresh air in 40 years :D. And they will be more sick. Viva el tecnologico!