To understand the Ferrari 312T on a surface level doesn’t take a genius.

Three liters, 12 cylinders, fixed to a transversely-mounted five speed gearbox. Ninety races, 27 wins, 61 podiums, and 19 poles. Four constructor championships and three driver championships; Niki Lauda twice in ’75 and ’77 with Jody Scheckter finishing it off in ’79, a couple years before the car would be replaced by the turbocharged 126C.

The ‘2’ simply stands for version two, revised with updates to stay competitive with the field as well as to remain compliant with the ever-changing rules in Formula One. The year of 312 T2’s debut was 1976, with Niki Lauda leading the world championship before his suspension failed at the German Grand Prix at Nürburgring, resulting in a catastrophic three-car accident.

If you don’t know how the ’76 Formula One season ended and you haven’t yet seen the 2013 film Rush, stop here, watch the movie, and come back. You’ll thank me later.

Otherwise — as you know — Lauda sustained severe burns and was hospitalized, heroically returning to the cockpit just six weeks later. Although James Hunt would go on to eke out the driver championship by one lone, singular championship point, the 312 T2 (with the sister car piloted by Clay Regazzoni) would fetch the constructor championship for Ferrari.

The following year the car was further upgraded, earning a ‘B’ at the end of its chassis code. This season brought with it additional challenges for Ferrari’s Formula One program, with tire supplier Goodyear favoring the high-downforce dynamics of the Lotus 78. Lauda was unhappy with the performance of the car which ultimately led to a redesign of the rear wing, bodywork and suspension.

Lauda’s requested changes worked; he successfully piloted the 312 T2B over the course of the season to earn the driver championship, and again handing Ferrari the constructor championship. Ferrari went on to produce several additional chassis and versions — 3, 4, 5, and 6 —  which also saw success until they were replaced for the 1981 Formula One season

Fast forward 42 years from when chassis 026 was raced by Niki Lauda to the 2018 Rolex Monterey Motorsports Reunion, when I first experienced the car up close and in person.

I was standing on Laguna Seca’s third turn during a warm-up lap as the Ferrari blazed through; even at pedestrian speeds the flat-12 sounded unimaginably celestial.

Currently owned by the MacAllister family, Lauda’s 312 T2 has been driven at historic races since at least the late 1990s. This is when Chris MacAllister tracked down the owner, asking for first place in line should the car ever be sold. The owner insisted he wasn’t interested in parting with the car but, lo and behold, a few years later the Ferrari was added to Chris’s collection.

Chris told me he was an avid Formula One fan in the ’60s and ’70s, and that Niki Lauda was his favorite driver. “He was no-nonsense and successful,” much like the incredible 312 he drove.

Although Lauda only used chassis 026 for a handful of races towards the end of 1976, Chris shared with me that this was the car that Lauda stepped out of at a torrentially wet Fuji Speedway to hand Hunt the championship. As 026 was then used early in the ’77 season, the car retains the bodywork specific to this year.

Chris described the experience behind the wheel with sudden excitement in his voice. The “car feels very light, and responsive. There’s no understeer. The gearshift is the smoothest… it’s a delight. And what a great sound.”

From the sidelines, all we can experience is that sound Chris describes, the incredible barrage of 12 pistons screaming away at 12,000rpm, delivering 500 horsepower to the tarmac.

The special experience of driving Niki Lauda’s retired Formula One car is not lost on Chris; he tells me every time he’s behind the wheel he feels a great sense of appreciation.

Chris went on to explain that the Ferrari has quite the learning curve, but once you get there it’s like nothing else. It’s not overly tight, there’s good visibility, and more importantly the car has “good ergonomics and good synchronicity… I love how it looks and drives,” he says.

Not having the pleasure of watching the Formula One seasons as they unfolded live throughout the 1970s, it’s thanks to owners like Chris MacAllister that any of us have the opportunity to get a taste of fantastic cars like this in person today.

Even if it is just a small sliver of the magnitude of experience that the 312 T2 can deliver, I count myself lucky.

I could be wrong, but isn't the engine is still longitudinally-mounted? if I'm not mistaken, only the gearbox is mounted transversely, which where the T in the name came from.

Haha oops, took out a couple important words trying to trim that sentence down lol. You're absolutely right, the T was referring to the gearbox which was shoved in ahead of the axle.

Now this is exactly what I was hoping to see and read on a Sunday morning! Thanks Trevor!

As a fifteen year old I saw This cars pre-descessor being beaten by the Hesketh Ford of James Hunt who took his maiden win in the formula one during the 1975 Grand Prix of the Netherlands at the Zandvoort circuit. But it was only soms thirty years later I van to fully enjoy the glourious flat twelve sound of It when I was standing at the pitwall at Spa Francorchamps during that years Spa Ferrari days and that thing came blasting by at full speed at what seemed an armlength. There also were soms 10 cilinder Ferrari's present which also raised all the hair on my arms and neck but the twelve cilinder die sound that more special. Great memories about these encounters.

Such an iconic machine, I always preferred it with the massive periscope air intake, shame they were banned. 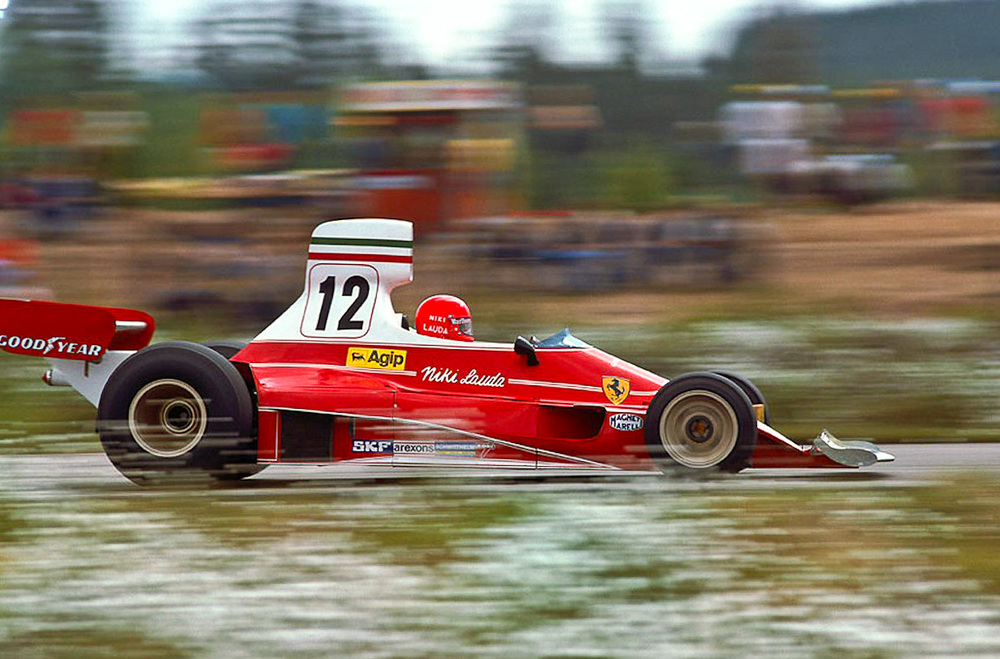 Yeah, I've loved the look of the intakes from that era since I was a kid. Changes the entire look of the car.

I'm sure I'll start an argument here, but didn't this car have a flat 12?

Yep, no debate there! Thanks for keeping me honest.

No argument because you're completely right. No V12 but a flat 12.

Amazing feature. Trevor knocking it out of the park as always. Enjoyed reading this.

DAMN!!!! This story was so awesome Trevor!!! And those old school photos together with the recent track pics!!!