To put it simply, the 24th edition of the On The Road model car, truck and motorcycle show in Jabbeke, Belgium is the biggest and most spectacular in Europe.

I had previously heard about the size of the event, but only fully understood how huge it is when I tried to park near the venue.

I arrived early, some minutes before the opening, but most of the designated places were already taken. After some hunting, I managed to find a parking spot for my little rental and went to check what the show is all about.

There are plenty of scale model shows in Europe, but most of them heavily feature tanks, planes and ships. The Jabbeke event is purely dedicated to car culture, only extending to motorcycles and trucks. In total, the organizers had more than 70 awards to hand out.

Germany, Belgium, France, Spain, Finland, Norway, and Ukraine were just a few of the countries I saw represented at On The Road. You could look at it as a large international car meet with a designated show area for vehicles and space for aftermarket parts – albeit all in scale form.

Since 3D printing has become accessible and affordable many enthusiasts are pushing the boundaries. While most aftermarket parts are resin casts from silicone moulds, in the last few years some companies have started offering 3D printed parts. 3D printing has changed the modeling world, because projects that were once not feasible can now can be realized. Some guys make their own parts, others sell them, and a few make masters for resin castings.

For example, a Ukrainian model car club was selling a kit of the Lancia Delta Integrale’s engine. They are the only ones who produce such a thing for this particular car.

I wasn’t surprised to see quite a few Liberty Walk GT-Rs as the Aoshima plastic kit is a good quality base to work from.

Sascha Müller took top honors in the ‘Japanese Tuning’ category, an open hood and detailed engine from an Aoshima street GT-R kit making the visual difference. That’s gold in the category three years in a row for Sascha now, something he puts down to the total package he offers: stylish, cleanly built and well-painted models.

Continuing with JDM topic, this table of Arthur Erbricht and Daniel Nollen creations was full of it, and in different scales as well. Arthur’s slammed Nissan Cube caught my eye with its bright yellow rims (complete with tiny wheel nuts) and purple metallic paint. The Cube took Arthur around 20 hours to build.

Looking at the table, I got the feeling that Arthur likes to focus on less popular models. You may remember this Volkswagen Golf Mk4 from the real world, and to recreate it in scale form a standard VW Golf kit from Revell was used as a base with an R32 front bumper and BBS Le Mans wheels. After painting, Arthur cut the livery design by hand.

I mentioned different model scales, and one of the prize categories at the show is ‘Custom Diecast.’ Customizing Hot Wheels and other smaller scale cars is fun and you can often be rewarded with a result quite quickly.

There was one diorama that really drew the crowds in – and for good reason. Engine noise and smoke is not a typical sight at a model car event, but they’re things Holger ‘Bobo’ Boborowski incorporated into his live action display. What’s even more impressive is that fact that a rallycross variant of the Fiesta doesn’t exist in the scale model world, so the rear air vents and other details were custom-made. Those window openings – not stickers, but CNC milled.

Here’s another custom project that I really liked. Its creator, Sebastian Motsch, said that the Hasegawa Volkswagen T1 kits (21-window, van and pick-up) have been in production for what feels like decades now, and are a very good bases for custom builds because of their simplicity.

Several years ago he bought the 1980s F1 boat and trailer combo as a half-built project from a guy in Jabbeke, for around $5 to $10. Due to missing parts, Seb often looked at the kit and pondered what he could do with it. Many moons later, while shifting some boxes around, it just happened to sit next to a Hasegawa T1 box and this sparked an idea in his mind. Door hinges still need to be added, but I’m sure you get the picture.

The design was inspired by French artist Pascal Meslet and his fictitious McBottle Racing Team paint schemes. There’s nothing fictional about Sebastian’s models: he works as an engineer at ZF, which adds a level of realism to his models. Every model project he makes could exist in the real world.

Work and improvement of the models never stops, that’s why it’s a hobby and everybody loves to do it. On the Road is big meeting place for old and new friends.

Two people at this year’s event will be remembered a bit more vividly than others: Luis Perez from the United States and Eero Kumanto from Finland. Between them, they took quite a few trophies home.

Eero is known to many as a kustom kulture artist, but his modeling skills are amazing. His achievements in Belgium included ‘Best Pick-up’ for his Mooneyes-themed VW single-cab pick-up, second in the ‘Hot Rod’ category with his ’32 Ford, and third in the ‘European Passenger Car’ with his Moon Equipped VW Beetle.

The Finn also received a special prize for his tiny Tunturi Maxi moped – ‘Best of Show Motorcycle.’ This moped is a legendary Finnish product from the ’70s, and according to Eero his model was built from scratch and took about one year to complete. He built parts from urethane block, plastic sheets and metal wires, while the tires are from some toy motorcycle. Eero also designed his own photo-etched parts for this project.

It took me a good amount of time to pass between all the rows in the first hall, but remember that there was another – with trucks.

Across the show area, there was a whisper that something fantastic awaited everybody in the second room – a fascinating diorama involving Scania trucks. Although my truck knowledge is pretty much non-existent, I had to go and check it out.

It wasn’t hard to spot. This is a very detailed representation of a Scania workshop with three trucks being serviced, and half of the components you usually glue to the model were found lying around as spare parts. It looked amazing.

It only took Swiss modeler Martin Stadler less than half a year to put together. I guess it was many hours of work within that short period, because the attention to detail and quality was monumental.

There isn’t a general rule on how to judge a model, but here are some of the aspects taken into consideration: painting, detailing, individualism, cleanness, decal application, effort, presentation and realism.

It takes great effort and an immense amount of patience to produce models like these guys do, but as with anything that people accomplish, there’s satisfaction in the end.

I don’t come to SH for these models/dioramas, but man I’m enjoyng them! The detail is amazing! Thanks for covering this event.

Whether kids are allow to enter the show?

Thanks a lot for these beautiful photos ! It makes you want to go to the place !

Wow, so many great cars, better than any 1 to 1 car show. Keep posting more like these. Love it. Thanks.

Thanks for sharing such an awesome story man! The photos and the models in them have such great detail. After having a look at those Alpina BMW's, it's given me an urge to make my Tamiya Mercedes 500 SEC Lorinser model that my parents gave me ages ago! Great article buddy, really captured the art of scale modelling!

thx for kind words! Go for that Mercedes for sure

You gotta love that "Christine" being crawled over by that bulldozer. Amazing details!

Not sure if you're aware, but this diorama is copy of a Hot VW's Magazine cover from February 1975! 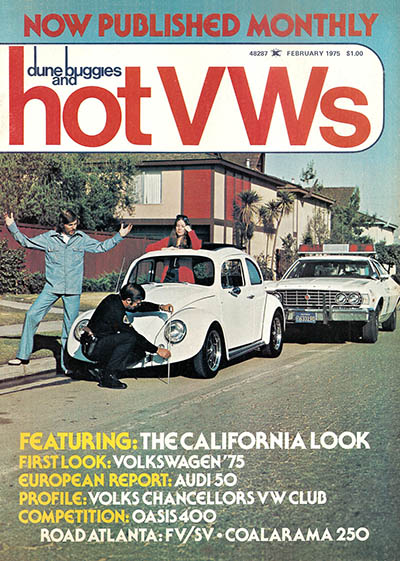 Are there any videos of that Fiesta diorama in action?

One thing that did make me laugh was: "The Jabbeke event is purely dedicated to car culture, only extending to motorcycles and trucks" (the very next picture) "Enter stage-left, The Thing!" Haha!

Excellent article though, some mind-blowing creations!

This made me want to go out and make my own!

Thanks for the great article and pictures about the best civilian-only modeling show in Europe, Vladimir! Well written and nicely curated pictures. It sure isn't easy to pick pictures for the article from the massive selection on display there. Hope to see you again at out show in Frankfurt in November.