Why am I calling these beautiful, state-of-the-art, high-priced racing machines ‘millennials’ you ask? Well, it’s simple really. Millennials are always seeing who’s got the best and latest gadgets, the most expensive shoes, and the craziest hairstyles, so you can almost directly compare them to these types of race cars.

To be competitive, be noticed and win races at this level of racing, you need to have the car with the most power, the latest engine management tech with a gazillion functions, a massive rear wing, the stickiest slicks, and a bad-ass livery of course. In this case though, it’s not actually bad, but a really good thing.

You see, what all this causes is a lot of competitiveness as well as continual improvement and development of cars and drivers alike. These guys are always adding new stuff to their cars: Bigger turbos, more boost, better aero, sharper brakes, and every little bit of fine tuning that is humanly possible.

If that’s not enough, there’s always the option of just buying a faster and better car, which does happen as well.

Buy It, Or Build It?

The guys that race in South Africa’s Extreme Supercars series are mostly self-funded/sponsored businessmen. As there aren’t really any major racing teams or corporate sponsors around here, having deep pockets always helps.

With that said, there are those that prefer to buy a thoroughbred purpose-built racing machine, like the Lamborghini Huracán Super Trofeo, Aston Martin Vantage V12 GT3, or McLaren MP4-12C GT3 for example. These cars are known to be fast, as well as reliable, so with the right driver and a good setup they can easily dominate the field.

Then there are the types that would rather take a road-going car and convert it into the ultimate track day titan. While this does take a whole lot more effort, time and more often than not, too much money, it can be extremely rewarding. A great example is the blue BMW ti, or ‘Baby Beemer’ as all the locals know it. It’s completely stripped out, with a proper cage, custom wide-body, mad aero, a well-sorted suspension setup, racing brakes, and a turbocharged S54 M3 powerplant. Its driver, Dawie Olivier, is a top-class driver and he quite often ends up near the top of the roster, against much bigger competition.

Amongst these custom builds there’s also a crazy Alfa GT, a Super GT-style Toyota MR2 with a 2G-R V6 engine swap pumping out almost 700hp, multiple generations of BMW M3s, and even a DTM-style Mercedes C55 AMG with a massive turbocharger slapped on for good measure.

Want The Ultimate Porsche, Then Build It

My favourite custom build by a mile though was a dark gray Porsche, which believe it or not, used to be a perfectly good road-going 997 Turbo. The private team from Franco Scribante Racing has raced and owned many epic race cars over the years, one of the fastest being a Chevron B26 with a custom-built Suzuki V8 built from two Hayabusa engines. For their latest project, they decided to go all out, building from the ground up, removing every original panel, stripping the car out completely, then fitting it with a VAD full wide-body kit completely constructed from carbon fiber.

They also had a custom motor, gearbox and drivetrain built, which has gone through quite a lot of changes already. Because the engine package can churn out close to 1,000hp, it also likes to destroy lots of its components. The team are continually developing the car though, and have been going faster at every event the car’s entered in. I’ll be looking at doing a full feature on this in the near future, and will be sure to include build pictures of course.

These cars might all look really good, but this was no park-off. These beauties are made for one purpose and one purpose only, and that’s to race.

The day before race day the rain came pouring down, so quite a few guys decided not to go out in the wet for qualifying. This meant that the few that did go out to put in some times could easily place at the top of the grid for the main races.

The aforementioned Porsche was one of these and put in a great wet time to qualify in first. Thirty-two cars then lined up on the grid for the first race.

The Porsche, plagued by ABS issues, slipped from pole position pretty soon after the start, while the Aston Martin and McLaren that started in 7th and 8th respectively quickly cut through the field. Ultimately, the Aston took the first race win with the McLaren in second and the black and red Gallardo GT3 rounding up the podium.

In the second race, the McLaren managed to keep the lead from the start taking victory, with the Scribante Porsche taking second and the Aston eventually taking third, after dropping to 14th due to a spin in the opening lap and then fighting back up the grid.

Even though these modern cars don’t produce the same nostalgic feeling of historic and classics racing, there’s still something captivating about them. Their precision engineering, sheer speed and glorious engine noises pretty much make up for any lack of character.

And that’s the beauty of racing. Whether you like the older or newer stuff, high-end or entry-level, if fuel runs through your veins you’ll mostly like enjoy all of it equally.

I think the only people who are going to appreciate race cars being compared to millennials is millennials lol. Good article tho, its cool to see the level of amateur racing in South Africa.

I'm 36 and I'm considered a Millennial. I look at most of these things and think "wow these are over priced". I'm just depressed that I feel most modern cars suck. I hate drive/steer by wire. It's my real only reason I still Love the 370Z and STi exist.

I may be a Millennial but as I sit in my Q50 Red Sport 400 AWD with every option my ONLY feeling is "ANYTHING with a manual would be more fun than this." It's just... boring. with all the modern changes in cars, 400HP is now just boring. My 2000 ZX2 S/R with autoX setup, fun, my 2003 Mach1 with bolt-ons, fun. This car out handles and out powers both of those. And it's just boring. 1 year later I'm actively looking for a car where the most "high tech" thing about it is a CD player, or bluetooth.

Keith, that's my exact feelings. Everything just feels so generic. One of my mates had a Skyline R34 GT-R and a R35, and damn what a difference between the two. With the 34 you feel so connected when driving it. The R35 although damn fast, didn't even feel fast and just so bland. This is my cousin's Mustang and yeah it's got some modern upgrades, but it's still an old car and I'd drive this thing anytime before a new supercar: http://www.speedhunters.com/2018/02/the-black-death-800hp-in-a-68-mustang-fastback/

Haha that's true. But you can be a millennial without conforming to the typical millennial stereotypes. Well I'd like to think so at least.

Alfa Romeo GT? I'd love to see more of that car!

I like it lots! Will try see if it'll make for something interesting

"Stefan Kotze" hahaha wow..so, are you vomiting all the time?

So many great looking and interesting setups.
Would love to see a full feature on that ZZ30 MR2

Seems like you're not the only one. I'm working on getting that organised soon.

What are they doing to that tire? Looks like they're cutting into it. Anyone know?

Well, I know that people shave treaded tires to get rid of 'tread squirm' experienced on a new tire so that they can access the tire's full performance potential earlier. Maybe a similar theory applies to slicks? Or maybe they're just cleaning off all the clumps of rubber picked up on track, haha.

Tyre shaving, to remove the top layer that can have pickup/ degraded.
Tread cutting, cutting grooves into slicks to turn them into wets

Your last observation would be the correct one. They were cleaning all the rubber that they picked up on track.

Awesome pics
Show the red MR-S or i cause mischief

Hahah I've been trying to get it for a shoot, just need to get a time that works for me and the owner. Here's a pic of it from the Knysna Hillclimb 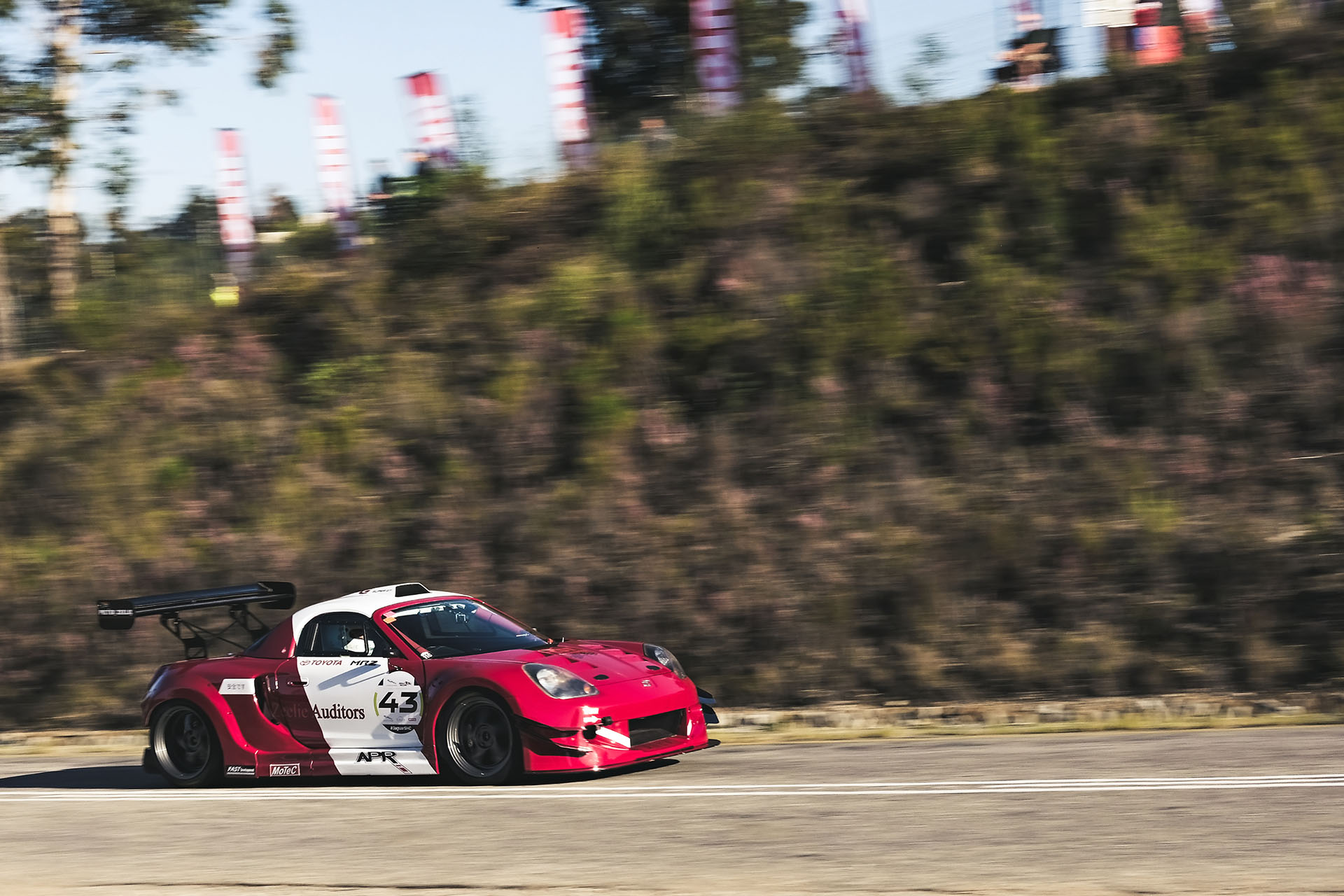 I've seen a couple of V12 GT3's race at Brandshatch and I think it's fair to say they have a tonne of character!!! Such an insane noise and was the loudest in the British GT3 field by far, how did it compare to all of the other modified cars there?

I'd so love to see this kind of racing event in the UK or Europe where you get such a large variety competing together I think it would be amazing and so interesting to watch as there wouldn't be the balance of performance right? So some cars would have advantages over others.

Awesome article thank you for sharing it

The Aston is pretty much undefeated still at the moment. It's just so smooth and the sound is eargasmic! The cars that race in the Extreme Supercars are in different classes, but all race together at the same time. So you can either win the race even if you're in a lower class, or just win in your class. Pretty much no restrictions in the highest class.

Check out the Britcar Endurance.

Hot hatches to GT3s on track at once

Awesome I will do thanks

I guess they aren't all competing against each other as their split into classes, but they do all race together

This is all kinda of bonkers-wonderful to me :D. There's a whole mini-hooniverse of possibly-featureworthy cars here!

Well alright, maybe not, but this kind of freakish, apples vs. oranges competition is what appealed to me in a former life as a street racer. The draw of the street was not knowing exactly what we were up against on any given night. These events-- where you can't even know what *engine* is in your competitor's car, let alone how much boost he runs (etc.) have the same appeal for me.

I'm pretty sure you're talking about the built racecars not the bought ones, if so then definitely. Some really cool stuff for sure.

Secrets definitely run high in these cars. Most of the guys are hesitant to give out any kind of info that you can't see with the naked eye.

Thanks Alron! Any good cars hiding in the big hole these days?

Haha im not too sure man, I've been in Cape Town the past 3 years

That's funny. If you know where to look you can blow the doors off these pieces of junk for way less. Millenials though.

Look at me generation.