What makes a car meet exceptional?

Obviously, both the quality and quantity of the cars that show up play a big role. Cohesiveness of each individual car, coupled with how each interacts with those around it, is also a significant factor. And location matters as well.

But none of these aspects will really make or break a meet. At least, not for me.

Like any hangout, what actually makes all the difference are the people who show up. You’ll probably look at all of the cars, some in great detail, but they don’t make for very good conversation on their own. Ask me how I know.

In all seriousness, it’s the people who bring these cars out that shape the vibe of the meet. Is it laid back, is it open, is it exclusive, is it rowdy? In attending meets, finding the right balance in these more nuanced aspects – perhaps best summed up as attitude and general feel – is far more rewarding than finding cool cars alone.

But couple this perfect balance with some of the most rare and well-modified Japanese classics in SoCal and you have the weekly old school JDM meet-up in San Diego.

In reality, this meet existed long before the formation of Team Wild Cards but many of the core attendees have remained the same over the years. It isn’t an exclusive event by any stretch of the imagination, but it is one that seems to be spread by word of mouth alone, rather than a far-too-large, open-to-everyone-with-a-driver-license Facebook group.

So even if I remembered where and when it was, it wouldn’t feel right for me to tell everyone reading to go ahead and show up. The reason for this being, most of the guys here have been friends for decades, long before cars became a focal point of their lives. Likewise, as much as Japanese cars are what Team Wild Cards is about, it’s obvious that friendships come first.

Elvin, who brought out a sweet 1988 Nissan Sunny long bed pickup, told me that the first guy in the group to really get into cars was Pat, who now has a Kenmeri Skyline at the Petersen Automotive Museum. Ultimately, he was the one who got everyone else into Nissans and Datsuns, because back when the guys were all in high school those cars were affordable and fun. Now years later, it’s the same high school friends loving the same cars.

This meet is purely about the people, nothing more, nothing less. Of course, there’s an obvious theme here, but it doesn’t really matter which car you bring out.

This meet is not for clout, it’s not for attention, and it certainly isn’t to impress anyone.

On that note, no one was here just to get their car on Speedhunters, either. It’s been weeks — months actually — since this little meet went down, and not a single person has messaged me for photos or asked where the feature went.

In an automotive climate full of immediate gratification and social media trends, the Wild Cards’ get-together was a breath of fresh air. And it was made even more fresh by the fact that this meet came in the midst of SEMA Show prep, meaning the cars here were near opposite to what I’d been surrounded by for days in Las Vegas.

While I was obviously shooting with the intent of putting a story together, it wasn’t my primary focus. Like others, I was more interested in having a decent conversation.

Perhaps I should have dedicated more attention to making certain images better, but I’ve included some of the less decent shots nonetheless, as they serve to paint a proper picture of the night. I also spent a good deal of time goofing off, playing with creating various light leaks — as you’ve surely noticed — while I shot around the parking lot. It was all for good fun, and good fun was had by all.

Future project cars showed up and parked next to builds which have been featured on Speedhunters before, like Jorge Aguilera’s fuel-injected, turbo-swapped ’71 Celica.

There were a good number of other standout cars, all of which I’m going to try and feature during my next trip south, but one managed to steal the most attention. And for good reason.

This is Matt De Mango’s Colt Galant GTO, a car built in 1973 by Mitsubishi.

But it isn’t any old Gran Turismo Omologato, no, this is a GTO GS-R and a rare right-hand drive export model to boot. I learned this extra acronym stands for Grand Sports and Rally, hinting at the race car roots of this platform.

As only a very small number of cars in this trim remain in existence (perhaps 10 or so, Matt tells me), I thought about chopping this story up to give more attention to this incredibly special car. But with these lackluster shots taken under a shoddy street lamp, that wouldn’t be quite right either.

In reality, it’s another one to add to the list of cars I need to shoot; probably a good one for a film story, I would think.

Musings of future photo adventures aside, Matt’s car underwent an eight-year restoration process, the results of which are readily apparent. Everything looks and even feels brand new, something that Matt attributes to the fact that Mitsubishi were, for some reason, still making new parts for the car up until only recently. I’m really glad that Matt brought this car out as, in all honesty, I would have never known this coveted GS-R spec even existed.

In talking with Matt, I realized I had actually seen one other example before at the Pebble Beach Japanese Automotive Invitational, without even realizing it.

To me, it’s these smaller interactions and educational experiences that make a car meet a good one; one that stays with you after you go home and go about your everyday life. There was no reason for anyone to be here other than that they wanted to see their friends. No one was showing off, no one was revving their engine or acting silly. It was refreshing to say the least, and exactly the kind of meet that makes us fall in love with car culture all over again.

A big thank you to Team Wild Cards as well as everyone else who came out and gave me a taste of the best of what San Diego has to offer. I’m definitely ready for that trip back to take in all the extra details and to get some proper shots.

For all of us here at Speedhunters, I’m Ron Burgundy. You stay classy, San Diego. 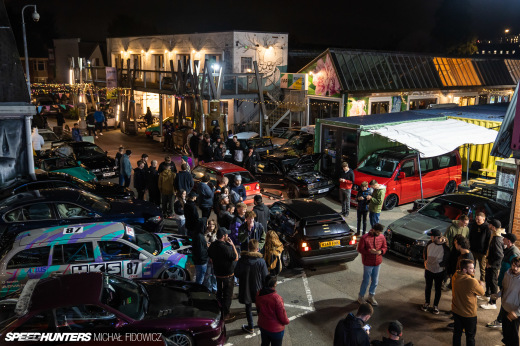 A Last-Minute Dash To Dub Club

Do you have any pictures of the car on the right of that? 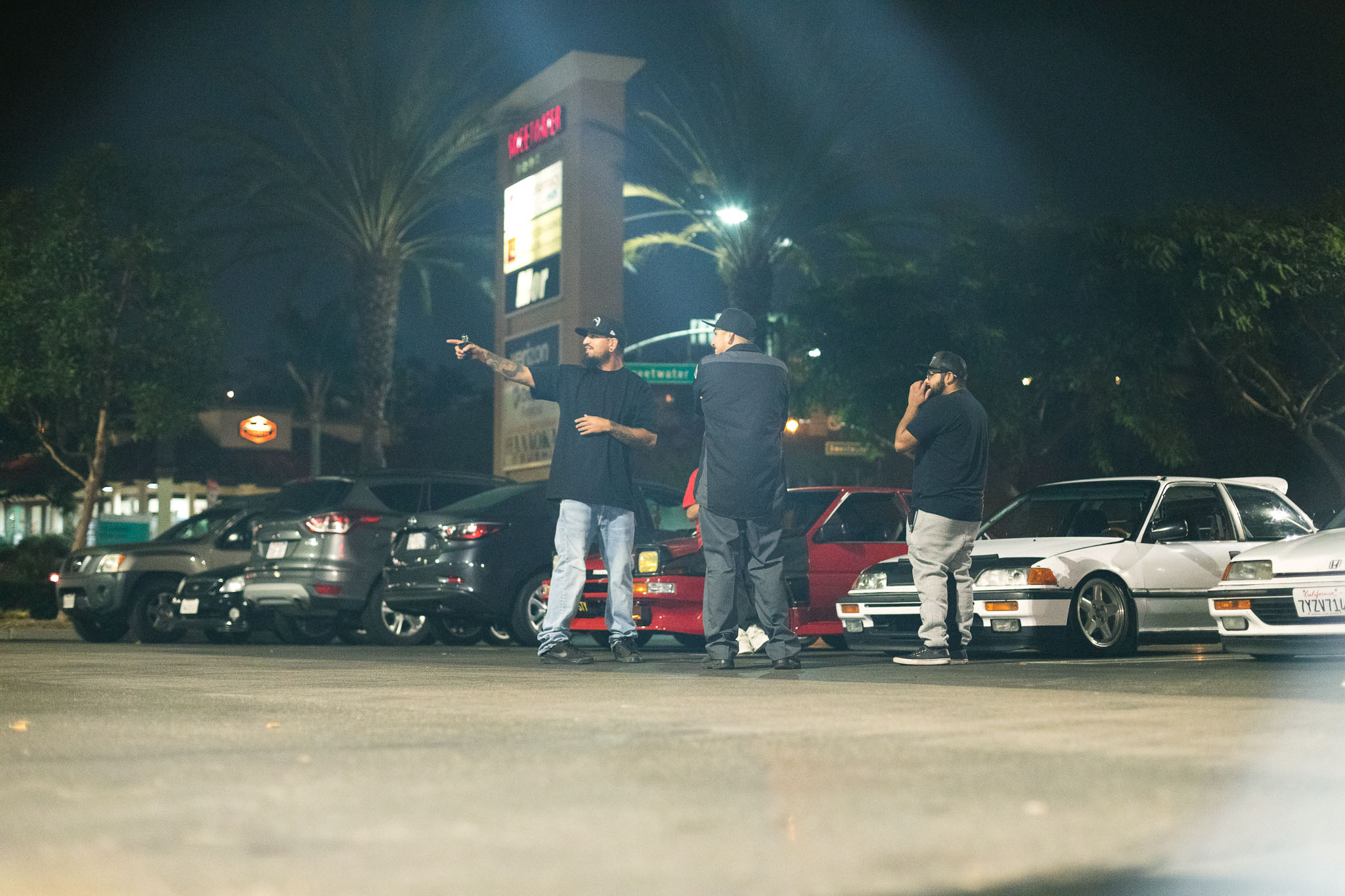 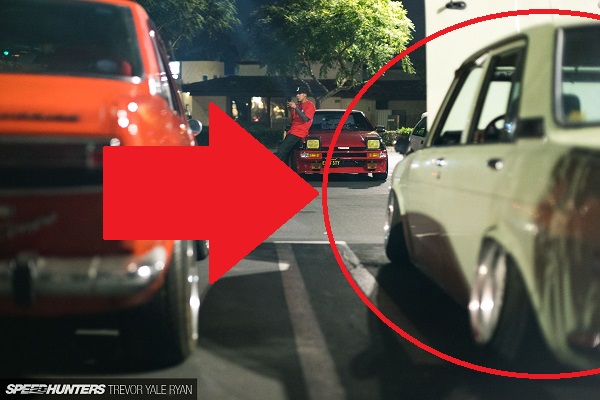 I think there are a couple in the story...

That GTO was featured in petrolicious few years ago.. still look stunning as ever

Still my favorite Petrolicious feature to this day

Yeah that's the one! Really awesome car to come across in a random lot, that's for sure

Trevor, that Mitsu Colt Galant GTO!!! OMG! Love it!!! The rest of the Wild Cards' cars are sick too.

Disappointed with the lack of coverage on all the other great cars at this meet. You are right that this meet is more about the people than the cars. Meets happen and no one brings their car, it's just a hang out. One thing I have to correct you on is that this meet has been happening long before Wild Cards was formed, around 5-6 years ago. So to call this a "Wild Cards Meet" is kind of a slap in the face to the OG guys that started this around 30 years ago at a different location. Sorry to vent, and this not hate against Wild Cards, but i think even the Wild Card guys would agree.

I didn't mean to misrepresent the meet by any means. A couple Wild Cards guys tipped us off about it but they never claimed to have invented it or anything. As such, I've added a note on what you mentioned in the article above.

If there were photos of cars I didn't post it's my own fault; a lot of shots didn't come out since it was a little bit dark lol. Tried to include most, though!

FOH with the gatekeeping though

This shit is at the Mor Furniture in National City.

Go forth and flex!

Go for it! Go park at the MOR store! We will see you there next Thursday! LOL!

Haha thanks, now I can find it again too!

San Diegan here, awesome coverage. For the most part i don't understand why SD isn't a big Car culture hub, maybe its close proximity to LA takes away from it. SD has everything from awesome beach front Coronado to hills in golden hills/balboa and multiple top notch race shops.

Thank you! I would 10,000% rather go to San Diego than Los Angeles but as you say I think LA sucks up the attention. More volume of cars, media, etc in higher concentration there. Anyway, my contact info is above, feel free to reach out if you're aware of anything that you think we should take a closer look out down there.

Another San Diegan here, love the article! Even know a couple guys in those pics lol. I personally think a lot of San Diego gearheads are desert lovers thats why its not as big as it is in LA

Nice! I do hope to do a lot more down there this year.

My god that NSX just oozes sex appeal with its angles and popups. People who don't like that design probably drive around in an everyday prius. honda really got the design of that car down just right.

what a bad ass line up of old school cars! love it!